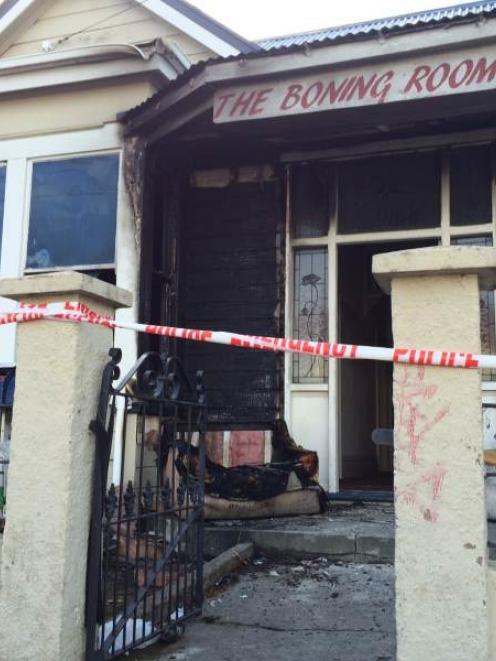 Photo by Hamish McNeilly
North Dunedin residents are asked to be vigilant following a spate of fires last night, which included an arson that caused significant damage to a flat.

The front porch of the Leith Street villa caught fire after a chair was set alight.

Significant damage was caused to the front of the house.

Police are keen to hear from three males, possibly wearing white tee-shirts, who were seen near the Leith St flat about 12.45am this morning.

"Without the quick actions of the neighbours who called the Fire Service, this property could have been burnt to the ground, and if it had been occupied at the time the lives of those inside certainly would have been endangered," Otago Coastal Area Commander Inspector Jason Guthrie said.

"Fires can quickly take hold and move swiftly through property. These fires are putting the lives of people at risk in a concentrated area of young people," he said.

"People living in these areas need to be extra vigilant in looking out for each other. If this continues it is only a matter of time before someone gets seriously injured or loses their life."

Three other rubbish fires, two in wheelie bins, were lit in Grange St, but police say it's too early to tell whether these incidents are linked.

In one of these incidents, rubbish at the front of a house was set alight while the residents were inside sleeping. In another incident, the occupants at an address smelt smoke and went outside to find their wheelie bin had been set alight.

In the third incident, a wheelie bin on the street was set alight.

"These actions go beyond a harmless prank to a criminal act that endangers the lives of others," Insp Guthrie said.

"We reiterate the message to those living in the area - do not tolerate this behaviour which is putting your property and yourselves at risk.

"Please report any anti-social behaviour to us or safely film or photograph any actions that you see that ultimately could endanger people's lives and property. Look out for yourselves and your neighbours."

Anyone with information that might help police catch those who are responsible should contact Detective Sergeant Brett Roberts on 03 471-4800.