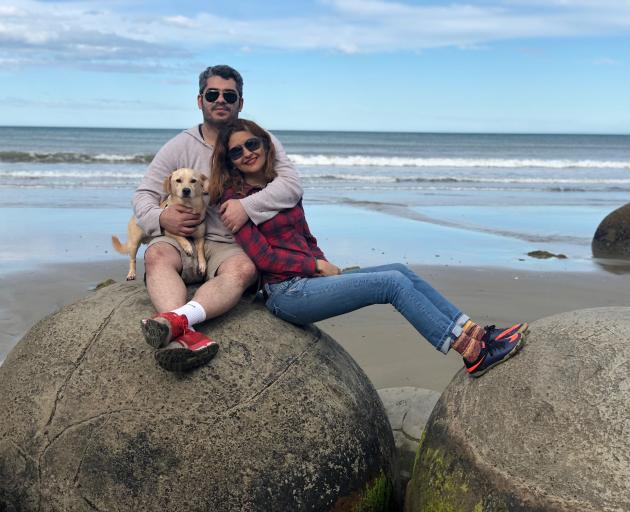 Dunedin couple Reza Fatemi and Sahar Abdolmaleki, pictured during a recent visit to the Moeraki Boulders with beloved rescue dog Joo, have been left out in the cold on gaining New Zealand residency by a recent announcement. PHOTO: SUPPLIED
A Dunedin migrant couple have been left ‘‘hurt and confused’’ after what had appeared a clear pathway to New Zealand residency was abruptly blocked by a shift in Government policy. Brenda Harwood reports.

Husband and wife Reza Fatemi and Sahar Abdolmaleki migrated to Dunedin from Iran in early 2018, and have been working, studying and contributing to the community since then.

The couple, who are highly educated and have backgrounds in management and science, love Dunedin and want to make their home here long term.

Despite their best efforts, they were shocked to find themselves out in the cold after a September 30 announcement by Immigration Minister Kris Faafoi of a one-off resident visa for up to 165,000 migrants.

Mr Fatemi, who holds a family/partner open work visa, has a background in management in the oil and gas industry in Iran.
After ‘‘starting from scratch’’ working for Harraways & Sons, he has worked at Allied Press Ltd since January 2020, and was promoted to customer service team leader in July this year.

Mrs Abdolmaleki is on a student visa as a PhD student within the University of Otago’s department of clothing and textile sciences, studying medical textiles.

Mr Fatemi said the new pathway visa was a good option for many people, and he thanked the Government for that.

‘‘However, the way they have included some types of visas and not others has excluded thousands of people, and we can’t understand why,’’ he said.

The issue was that both visas for the couple became no longer eligible after the September 30 announcement and they had to shift to temporary visas.

Mr Fatemi had enough points to qualify for the skilled migrant category, but that pathway had been frozen by Immigration New Zealand for the past year so he and his wife were stuck with temporary visas.

When approached, Dunedin MPs had been unable to provide a clear answer as to why the decision to include some skilled migrants and exclude others had been made.

‘‘Especially as the new rules seem to put those of us who are eligible to apply for the skilled migrant category resident visa on hold for an unknown period of time,’’ Mr Fatemi said.

Having already lived in Dunedin for three-and-a-half years, Mr Fatemi and Mrs Abdolmaleki have put down roots in the community, including volunteering at the Northern AFC football club coaching children and with the NZ International Science Festival.

‘‘We have tried really hard to be productive and to prove ourselves to society,’’ he said.

‘‘We understand that jobs need to go to Kiwis first, but feel that the way things have been done is unfair — it creates too much uncertainty and leaves people like us caught in limbo.’’

Mrs Abdolmaleki said the couple took time to overcome the language barrier and integrate when they first moved to Dunedin, but were now very fond of the city.

‘‘We have friends, we love to be involved in the community and we try to add value to the city,’’ she said.

‘‘We really want to settle here and pay back to the city and society, but if we have no security that we have a path to residency, then we may have to go elsewhere.’’

She submitted her PhD last week and is looking for jobs in her field — both within New Zealand and overseas.

Any move would also affect the couple’s beloved dachshund-golden Labrador-cross Joo, whom they adopted as a rescue dog in Iran and went to great lengths to bring to New Zealand, which included having Joo cared for by friends in Canada for nine months.

‘‘We adore him and have gone to great lengths to have him here with us,’’ Mrs Abdolmaleki said.

In a response to questions from The Star, a spokesman for Immigration Minister Kris Faafoi said, in a statement, the Government was ‘‘committed to rebalancing the immigration system for those who can come to work, study and live in New Zealand once our borders reopen’’.

‘‘The 2021 resident visa is a one-off residence pathway in response to extraordinary circumstances.

‘‘It recognises the immense contribution migrants have made to New Zealand during the pandemic and the uncertainty they’ve faced with closed borders and necessary changes to immigration settings, but it does focus more on settled, skilled and scarce migrant workers, reflecting their critical part in New Zealand’s economy.’’

While the resident visa provided around 165,000 people with a pathway to residence, not everyone would be eligible. Student visa holders were not eligible unless they were the dependants or partners of other applicants. People who were not eligible for the new residence pathway would need to explore other visa options if they wanted to stay in New Zealand permanently, such as the skilled migrant category, the statement said.

They could also apply for the two-year essential skills visa if this option was available to them.

Those with skilled migrant category (SMC) and work-to-residence applications or expressions of interest (EOI) already submitted would still be processed if they chose not to apply for this one-off visa.

‘‘Otherwise, people can continue to submit EOIs for the SMC, but selections won’t resume until after 31 July 2022 to allow Immigration New Zealand to prioritise processing applications for the 2021 resident visa and those already submitted for other residence categories.

‘‘No decisions have been made yet on whether there will be any changes to the SMC when EOI selections reopen,’’ the statement said.

Several online petitions have been launched since last month’s announcement, calling on the Government to expand the pathway visa criteria to all visa holders.

This would include those on student visas and partnership visas who have lived in New Zealand for three or more years, earn the median wage ($27 an hour), or work in a role on a scarce list.

These people have been in New Zealand throughout the Covid-19 pandemic.

Many started out on one of the eligible visas and then transferred to other visas to improve their job prospects, decouple from a single employer and improve their chances of gaining residency.

The petitions have already gathered tens of thousands of signatures.