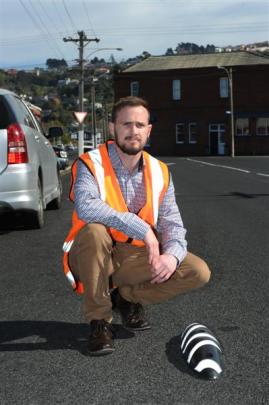 Dunedin City Council contracts engineer Kieran Trainor in Richardson St, St Kilda, where ''zebra-armadillos'' will be used to separate a new cycle lane from vehicle lanes. A line of solid recycled plastic humps will be attached to the road surface to... 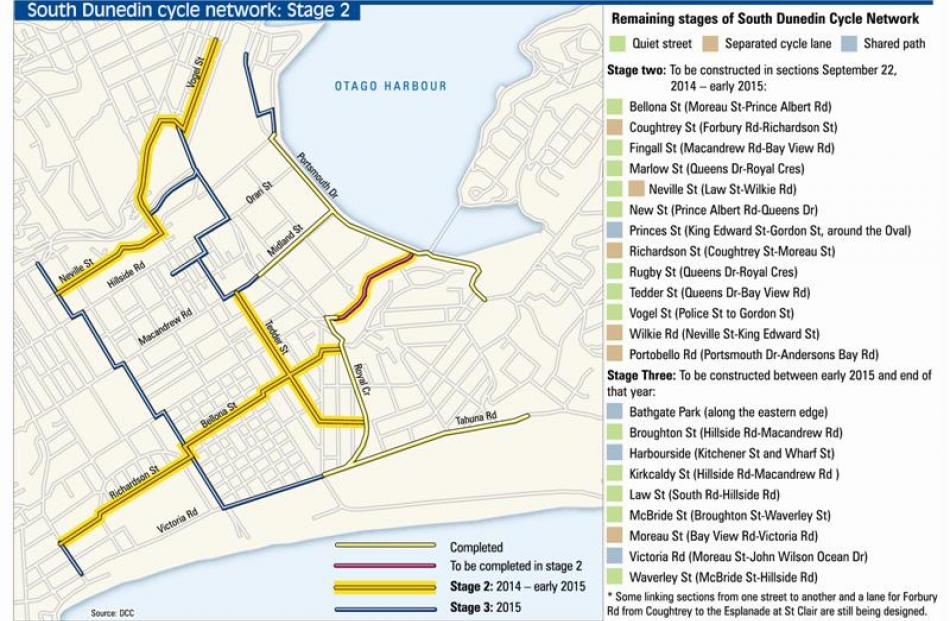 Trucks and diggers will roll into the southern part of Vogel St in central Dunedin this month, as the controversial multimillion-dollar South Dunedin cycle network continues to expand.

The second stage of the network, costing about $1.3 million in total, will be built on 12 southern Dunedin streets over the next five months, starting in Vogel St on September 22.

The other streets through which the routes will pass include Coughtrey, Richardson, Bellona, Fingall and Tedder Sts, Wilkie Rd and around the Oval in Princes St.

Dunedin City Council projects engineer Evan Matheson said because the fine details of designs were still being worked through, it was yet to be decided which route would be done after Vogel St, but the work should follow a ''logical'' sequence.

The first five routes of the $5.5 million million cycle network, which provides a place for cyclists of all abilities and confidence levels to ride safely, were completed earlier this year.

One, a section of Portobello Rd, is still to be completed. Council senior traffic engineer Ron Minnema said yesterday consultation on how to finish it off was to start shortly with residents and affected groups.

Mr Matheson said route signs for the completed parts of the network would be installed after the second stage of work was finished, in early 2015.

The final five or six routes of the network would be built after that and the whole network was to be finished by the end of next year.

The first part of the second stage of work was to turn Vogel St, from Police St to Gordon St, into a ''quiet street''.

Quiet streets mostly required construction of kerb protrusions at intersections to narrow the road, forcing traffic to slow down, making it safer for cyclists.

In Vogel St, no protrusions would be built at intersections around the fuel truck stop, and there would be no one-waying of any two-way intersections, such as that which caused a furore in Marlow St earlier this year.

Vehicles will also only be able to enter Bellona St, and not exit it, from its intersection with Churchill St.

Mr Matheson said the new cycle routes would mainly be quiet streets, but there would also be some cycle lanes separated from traffic and some paths shared by pedestrians and cyclists.

''There will be people that use streets regularly that don't have an address or a business there that may not be aware of what was happening. There's always a risk we can't capture everyone who uses the streets.''

Transportation planning manager Sarah Connolly was unavailable until today to elaborate extensively on the changes at New and Bellona Sts and how consultation would be done better this time around.

But she confirmed by email yesterday that update letters, sent before a specific construction timeframe was in place, were sent to all occupiers and non-resident ratepayers of properties on network routes.

Mr Matheson said regulatory signs, saying where cycle facilities started and ended, had been ordered and would be installed when they arrived, while route markers for the network were being designed. They would be installed at the completion of stage two of the construction work to ensure they were in the right places.

''We want to be sure that it all does join up exactly where we think it will [because things can change slightly in construction] and we don't have to take signs out and put different ones in because we've added or taken something out.''