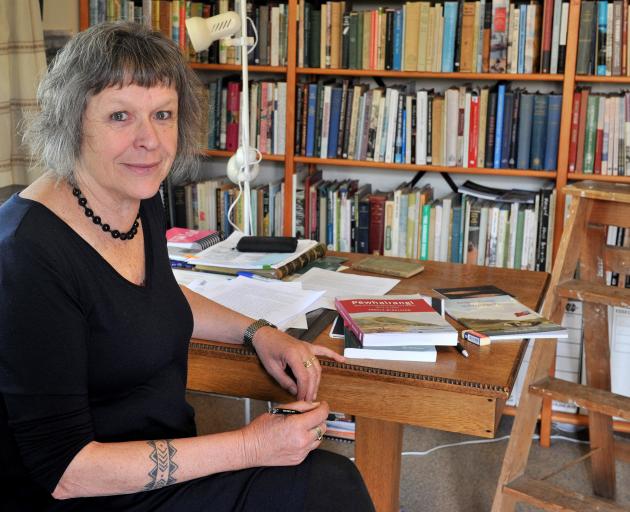 The late Dr Angela Middleton, author of Pewhairangi, a book about early New Zealand missionaries, in 2014. PHOTO: LINDA ROBERTSON
Thanks to the power of the pen, the wife of Maori leader Hone Heke may have played a far more important historical role than previously thought.

And research by the late Dunedin archaeologist Dr Angela Middleton suggests that the place in history of Hone Heke’s wife, Hariata Rongo, one of Northland’s wahine toa (warrior women), may need to be rewritten.

The daughter of Northland rangatira (chief) Hongi Hika, she was described by various commentators who met her as imperious and intelligent, and she also had a way with words.

She had lived at the Kerikeri Anglican Mission Station, in the Bay of Islands, in the 19th Century, Liz Bigwood, who now manages the station for Heritage New Zealand, points out.

Evidence that Hariata learned to read and write at the mission was found when workers found a slate bearing the signature of Rongo Hongi, her pre-baptismal name, beneath the floor of Kemp House kitchen at the station in 2000.

"The writing slate, likely to be the earliest extant written text by a Maori woman, and a taonga that is on display in Kemp House, was added to the Unesco Memory of the World New Zealand Register earlier this year," Ms Bigwood said.

Research by Dr Middleton, an archaeologist and honorary research fellow at the University of Otago’s department of anthropology and archaeology, showed that the slate had also provided important handwriting evidence.

This raised questions about the authorship of letters that had previously been attributed to Hone Heke.

Writing in the New Zealand Journal of History last year, Dr Middleton, who died earlier this year, maintained that while Hone Heke’s letters to governors FitzRoy and Grey and to other people have been quoted by historians as being written by Hone Heke, research showed that Hariata contributed to these.

Using handwriting analysis, Dr Middleton examined authenticated samples of Hone Heke’s writing and compared these with the handwriting on Hariata’s slate and letters known to have been written by her.

Some letters attributed to Hone Heke had clearly been signed by Hariata, and some even believed to have been written by her.

"That raises questions about whether Hariata was the scribe, or whether she actually wrote the letters in Hone Heke’s name."

However, according to Dr Middleton, the role of secretary could be interpreted in different ways, including composing a letter for another person, not just writing dictation.

Governor Grey noted that it was from Hariata’s rank, as the daughter of Hongi Hika and Turikatuku, that Hone Heke had, in great measure, derived his influence, Ms Bigwood said.

With Hariata’s formidable whakapapa, influence and mana, it was "almost inconceivable that she was not a significant player in her own right in the political scene in the North," Ms Bigwood said.

Dr Middleton concluded that Hariata penned and signed correspondence in Heke’s name but it remained unclear to what extent they may have worked jointly, or which letters Hariata may have produced on her own.

Dr Middleton also asked if, in the Maori world where women were active fighters alongside men, "Hariata may have found her own new method, letter-writing, to join Heke in the battle".