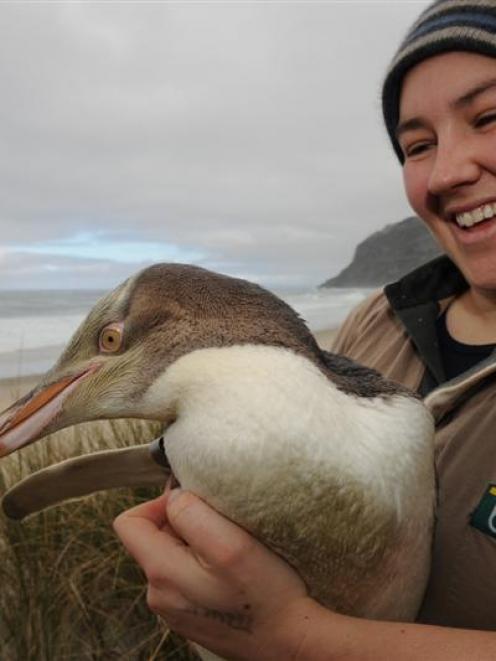 Department of Conservation worker Mel Young prepares to release the island-hopping juvenile yellow-eyed penguin back on to the Otago Peninsula. Photo by Stephen Jaquiery.
A young yellow-eyed penguin got its first look at the beaches of home yesterday after a three-week "OE" in the North Island.

The penguin's sense of adventure took it up the coast from Otago to a beach in Wellington, where it was found in an extremely emaciated state.

After getting a clean bill of health, it was flown back to Dunedin yesterday and returned to Otago Peninsula by Department of Conservation staff.

"It's had its big OE. Now it's time to settle down," Doc biodiversity ranger Mel Young said.

The penguin was initially cared for by the Native Bird Rescue Wellington Trust, before being moved to Massey University's specialist wildlife unit.

Wildlife veterinarian Dr Roberto Aguilar said it was so ill when found it was unable to stand up.

How it got to the North Island was not known, but it was probably lost, or at the very least wandering, to have ended up there, he said.

"Whether it swam or followed a wrong current, it was very thin and extremely dehydrated."

Tests showed nothing wrong except for there being some parasites, which staff at the university treated, he said.

"It may just have had what we call mal-adaption. That is, he just didn't know how to survive properly without access to proper food."

Regular feeding in the wildlife ward soon changed that, with the bird piling on the weight, going from 3.5kg to 5.3kg - gaining about 100g a day.

Ms Young said yesterday she weighed, measured and banded the bird before placing it in a "nice spot" so it could decide to either go up into the flax or down into the water.

"It sat there looking around a bit so we decided to give it some privacy."

She hoped the bird would give up its wandering ways and go on to find a mate.

There are about 470 breeding pairs in the South Island, with the rest of the population on Stewart Island and the sub-Antarctic islands.