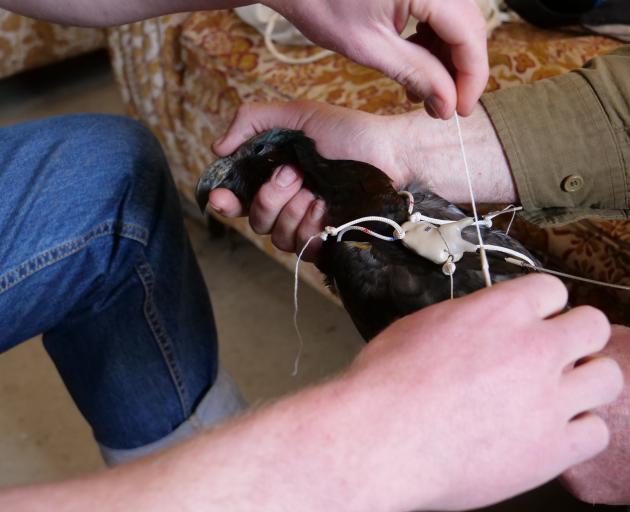 A transmitter is attached to a kaka to ensure the movements of the endangered bird within and beyond the Orokonui Sanctuary can be monitored. PHOTO: TAYLOR DAVIES-COLLEY
The deaths of four endangered kaka in recent weeks have prompted Orokonui Ecosanctuary to warn of the dangers of feeding the inquisitive bird.

Over the past six weeks, the four dead kaka were found in quick succession, autopsy results revealing one death was caused by injuries from a leg-hold trap, two by electrocution and one believed to be from contracting a parasite from consuming cat faeces.

All but one were found outside the grounds of the sanctuary.

Conservation manager Elton Smith said he had grown more disheartened following each "gruesome" death, and was worried there were more to come.

"The second one [that died] was alive for up to 10 hours with horrific burns before it died.

"We’re talking 10% to 15% of our kaka population here. It’s incredibly concerning for us."

Mr Smith said it was hard to come up with a blanket solution as the causes of the deaths had been different.

"I talked to someone from Zealandia in Wellington, who have hundreds of kaka. They’ve never encountered an electrocuted kaka ... the fact that two birds have been electrocuted is making us think there’s perhaps something not right with the power infrastructure around us."

Mr Smith said the sanctuary would continue investigating what could be done, but encouraged people not to feed kaka.

"What is definitely known is that the endangered forest parrots are at greater risk if they hang out near human infrastructure.

"In this context, we encourage people not to feed these birds.

"Not only may the food harm them, but because they are naturally inquisitive, they may explore other things that are potentially dangerous and are at greater risk of being attacked by predators."

A $20,000 Otago Participatory Science Platform grant has enabled the sanctuary to launch education programme Kei Hea Nga Kaka (Where are the kaka) on October 3.

Local residents are invited to come along on the open day and find out how they can become involved in local kaka conservation.

"We think public education is a great place to start. We do all we can here but need the public’s help to keep them safe."

In a second study undertaken by University of Otago postgraduate student Scott Forrest, transmitters would be attached to select kaka to track where they fly, providing more information about how to keep birds safe.

This is just devastating and yet more evidence of how humans are destroying biodiversity. We are destroying their natural environment. Replacing it with farmed animals, exotic grasses and crops to feed them. Replacing it with vast pine plantations that then speard as wildings or fuel huge forest fires. Even so the rate of tree cover loss has gone up by 43% since a global agreement to combat deforestation was signed at the UN in 2014.
Humans are like a virus slowly spreading it's unban sprawl, bringing with it our pets and machines spreading it's tentacles into the countryside and oceans sucking it dry of resources and life, while all the time polluting.Yet somehow many people here think the solution is just kill more!
Mass culls, carpet bombing with poison, killing for sport, glue traps and medieval leg traps. There is no end to our cruelty and yet our natural world is still collapsing.