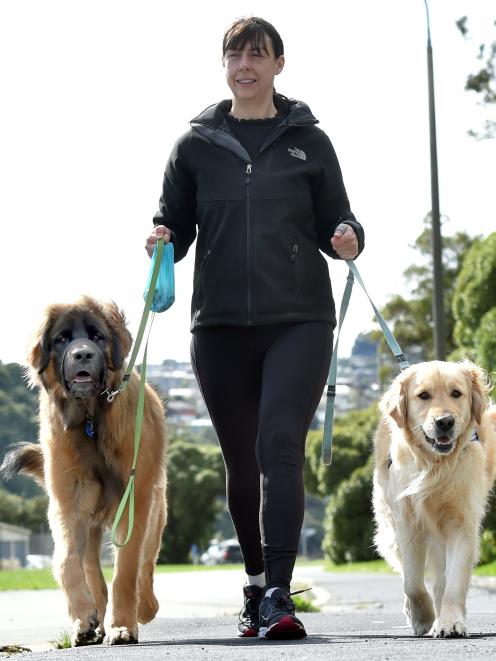 Giving her dogs Arlo (left) and Nero a walk in Portobello Rd yesterday is Jessica Rodger, of Dunedin. PHOTO: PETER MCINTOSH
Dunedin is going to the dogs.

The number of canine companions in the city rose by 160 in the year ending June 30, bringing the total number to 18,190.

The city’s annual report to the Department of Internal Affairs said the majority of owners were "generally very compliant" in terms of not exercising their dogs in prohibited areas, and using a leash where they should.

But the Dunedin City Council report said there were 2668 complaints, including ones related to aggressive, attacking, barking or wandering dogs.

Of those, 28% were in relation to barking.

The report to the planning and environment committee, set to be discussed on Tuesday, said due to the high number of complaints received annually, animal services officers were employing "bark boxes" to record barking.

Three new devices were bought in the past year.

"This device has been found to be invaluable when dealing with these complaints, particularly when dog owners are not home and do not realise how often their dogs are barking."

Two hundred and twenty-seven dogs were impounded over the 12-month period, down by 49 on the previous year.

A total of 565 infringement notices were issued, a decrease of 67 from the previous 12 months.

Three owners were prosecuted for a breach of the Dog Control Act.

The report said Dunedin had 21 dogs classified as dangerous and 201 as menacing, 29 of those classified in the past year.

Most days I see dogs running around sports/nature parks with no leash or muzzle- and some of them you do not want to meet whilst walking (so I rarely use the parks- I do not feel safe enough to use them), let alone stepping onto something. Seizing these dogs and locking them up until the owners pay punitive fines is what people expect- but DCC dog control has no capacity to enforce such rules- just pay your rates for the 'service', and don't use it. DCC wins, you loose.

Some days it looks as if all 18,190 dogs have walked along Highgate, from Roslyn to Maori Hill, if one draws a conclusion from the faecal remains deposited there... some dog owners need to be frequently reminded of their responsibility in this regard.

maybe the dcc should have those things where doggy bags are put for those who need bags not having plastic bags anymore makes it hard.. when one has a dog they can put up bags from dcc which is octagon.. would be nice for dcc to send bags out to people who own dogs too.. . and there need to be more rubbish bins around.