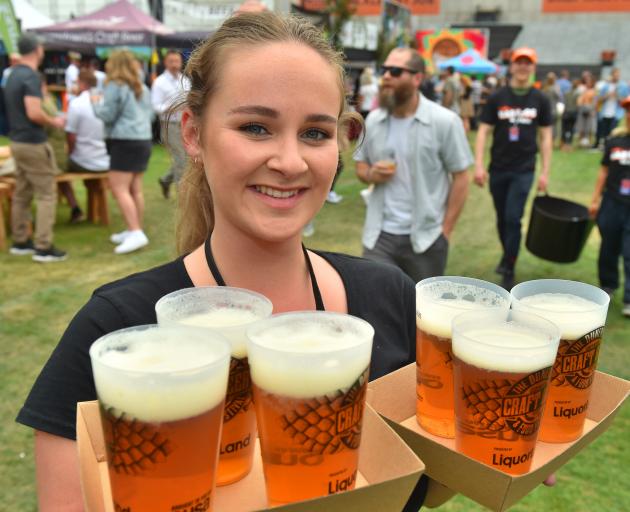 Georgia Crowie (26), from Emerson’s Brewery, had a busy evening on her hands as thousands of punters flooded in to Dunedin’s Forsyth Barr Stadium yesterday for the start of the now two-day Dunedin Craft Beer & Food Festival. PHOTOS: GREGOR RICHARDSON/SAMUEL BINGHAM
It was hot, sunny and the music was pumping - and that was just the start.

Thousands of punters flowed into Forsyth Barr Stadium yesterday for the first round of the now two-day Dunedin Craft Beer & Food Festival.

A near-capacity crowd approaching 6000 attended day one of the Otago University Students' Association's annual event, now in its seventh year.

The festival is, for the first time, being spread over two days, yesterday being a child-free R18 event, running from 3pm to 9pm.

Among those sampling the assortment of beer and food offerings were Sam Buxton (30) and Hannah Muldrew, who said they came every year and looked forward to bumping into people they had not seen for the past 12 months.

"For me personally, it's just trying different brews, it's the atmosphere, and it's a good chance to catch up with people you don't see very often," Mr Buxton said.

He saw the switch to a two-day event as a positive move for the festival.

"It's just a sign of the continued success of the event. It's a testament to how well run the event is," he said.

But it was not all about the beer, either.

Helen Twaddle (38), of Mosgiel, said she attended for the first time yesterday despite one big challenge.

"I don't drink beer," she said with a laugh.

Instead, she was making do with a mojito cocktail and some cider samples while enjoying the rising temperature under the stadium roof.

"They are on to a winner there," she said.

The festival has attracted more than 80 food and beverage vendors from Dunedin and around New Zealand, plus musical acts The Phoenix Foundation, The Chills and Hollie Smith for both days.

The festival concludes with a more family-friendly day today, for which all 6000 tickets have already been sold.