By John Lewis
0 Comments
Lovers, dreamers and travellers to and from Dunedin will all now be welcomed and farewelled by a rainbow.

Dunedin Airport has painted its main pedestrian crossing in rainbow colours in support of the pride community.

The rainbow is a symbol of lesbian, gay, bisexual, transgender, queer and intersex pride (LGBTQI+) and related social movements.

Dunedin Airport chief executive officer Richard Roberts said the idea stemmed from a community initiative started this year, in which a group of local business people, led by bar owner Dudley Benson, wanted to see a rainbow crossing painted in the city centre. 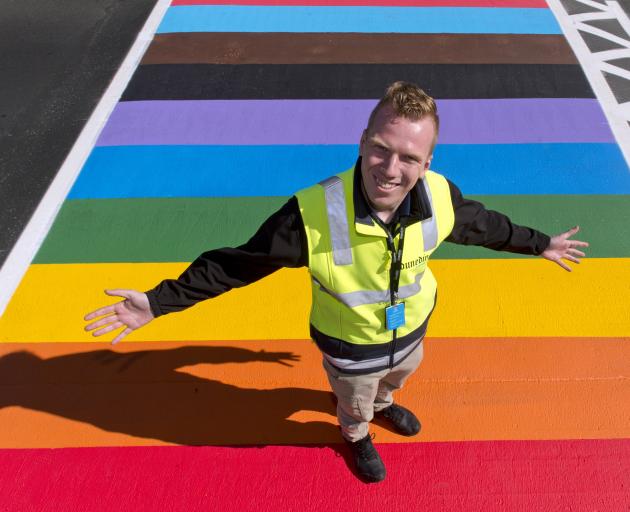 Dunedin Airport operations manager Jesse Gibbs welcomes all-comers on a new rainbow crossing outside the terminal’s main entrance. PHOTO: GERARD O’BRIEN
Mr Roberts said team decided one at the airport entrance would be equally as effective, successfully sought approval from the airport’s board and, working with various parties including Mr Benson, who helped with the design, the crossing in front of the terminal’s main entrance was painted on Wednesday night.

Dunedin Airport board chairman Jonathan Cameron said the city’s first rainbow crossing signified a warm and inclusive welcome to the airport and region, and had the full support of the board and shareholders.

Mr Benson said he was ‘‘really proud’’ of Dunedin Airport and its team for recognising a rainbow crossing was needed.

Visual representation of LGBTQI+ people had been missing from the city.

"It means a lot to me, and I'm sure many people in our wider Dunedin community, that visitors by air to our city will understand that as soon as they leave the terminal at the airport and make their way over that crossing, they'll know that our city is one that welcomes LGBTQI+ people, and that those people are loved and
accepted."

A rainbow crossing for somewhere in the city centre was approved by the Dunedin City Council last week.