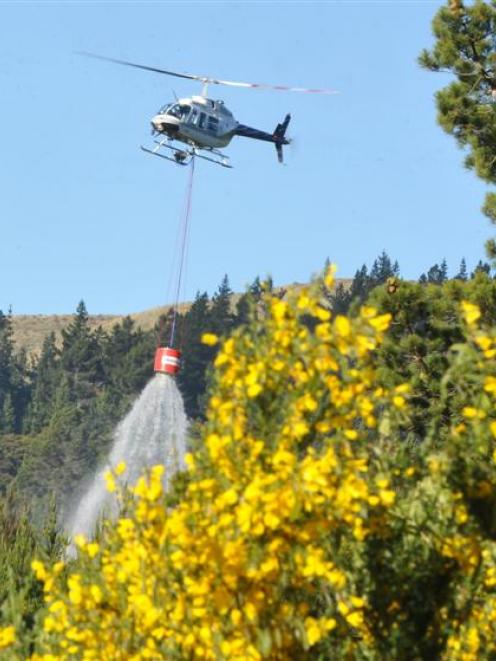 A helicopter-borne monsoon bucket is used to dampen the remains of a forest fire near Dunedin on Saturday. Photo by Craig Baxter.
A suspicious fire in a City Forests block at the weekend was a callous act, and people needed to think carefully about the danger and cost of their actions, the forestry company says.

The Fire Service was called to the blaze in five-year-old pines in the Flagstaff Forest near Whare Flat about 5pm on Saturday.

Fire Service crews from the Dunedin, Roslyn and Mosgiel stations initially attended the callout, until control was handed over to Rural Fire.

City Forests chief executive Grant Dodson said the damage would not affect the financial performance of the company, but it was still a loss.

The costs of extinguishing the fire, for which the company was liable, would be significant. The company was insured, but that was not the point and the fire looked like a ''callous act''.

Mr Still said the fire was definitely suspicious, although he was not yet certain if it was deliberately set or began accidentally from a fire that should not have been lit in the forest.

Firefighters returned to the forest yesterday to dampen down hot spots, and a fire-fighter would check again today.

• Two helicopters were required to deal with a large blaze that destroyed 10ha of scrub and grass at Nine Mile Station in the Lindis Valley yesterday.

Fire crews from Omarama, Luggate, Tarras and Alexandra attended the fire, which was first reported at 12.40pm. Rural fire crews were on site dampening down the area until 8.15pm.