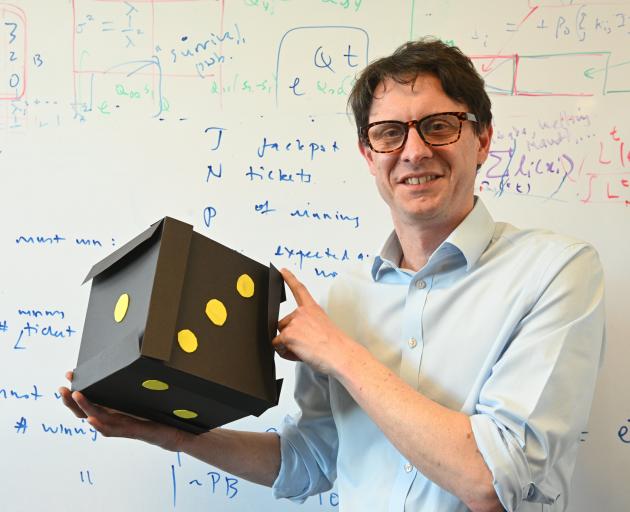 Dr Parry, a senior lecturer in the University of Otago mathematics and statistics department, buys a Powerball ticket when the prize pool reaches $30million or more.

He views his $12 ticket as "entertainment spending".

Nevertheless, how are your odds affected when the jackpot must be struck?

The odds of winning the main prize in Powerball division 1 and division 2 , in fact, remain exactly the same: one in 38 million and one in 6.4 million, respectively, he says.

However, the amount of money that could be won overall had risen.

"This is especially true in Saturday’s ‘must win’ situation because if no-one wins division 1, the money goes into division 2 prizes."

And the winner of the main prize was more likely to have to share it with others.

"Some people think that [sharing] reduces their expected winnings."

However, that was not necessarily the case.

"And if you do end up sharing the main prize, you will have the additional warm feeling of knowing other people are feeling as happy as you."

Many people had time-honoured habits, sometimes quirky beliefs and preferences about numbers, and also about buying Powerball tickets.

He preferred his numbers already randomly generated, but some people dreamed up their own figures.

And some thought that repeatedly using their "own" numbers boosted their chances, but that was not the case.

"There’s no magic way around the odds."

He also worried a bit about identical-number folk who, after years, briefly forgot to enter, and their beloved sequence scored a big prize.