For whom the bell tolls: Ringing for her mother 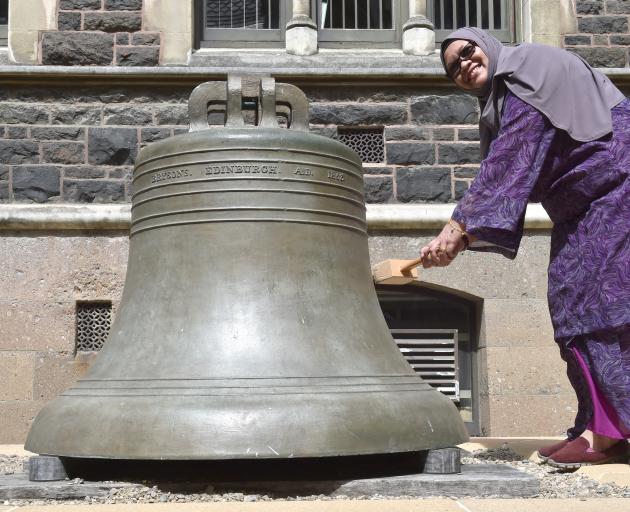 University chaplain Salmah Kassim, who hails from Malaysia, is due to graduate with a PhD in higher education next year.

That was in stark contrast to the experiences of her mother, Hajjah Bisab Salleh, who was illiterate, but who was determined her nine sons and daughters would get a good education.

‘‘It’s her dream to have at least one of the children to get a PhD.’’

The tradition of striking the bell when a doctoral thesis is submitted is one the university reintroduced during 2019, and Ms Kassim was surrounded by colleagues and supporters when she went down to the university quad to strike it yesterday.

Ms Kassim said her piece of work looking at Malaysian women who chose to study overseas on an exchange programme in the late 1990s, and their future in their chosen careers when they returned to the conservative country, tied directly into her own experience.

As a PhD candidate in her 50s, the former diplomatic attache at the Malaysian High Commission in Wellington felt she was proof women could do anything when it came to getting themselves educated.

Her husband and adult children, who were university graduates themselves, provided invaluable support, she said.

‘‘I’m glad that my role is not only for Muslims, but for them all,’’ she said.

‘‘I have found lots of Islamic values in New Zealand ... People are kind, people are compassionate to one another.’’

Of the 14 Malaysian women whose experiences she had studied, only five or six had lived up to their potential and ‘‘made it to the top’’ of their professions once they returned to their patriarchal society after studying in New Zealand, she said.