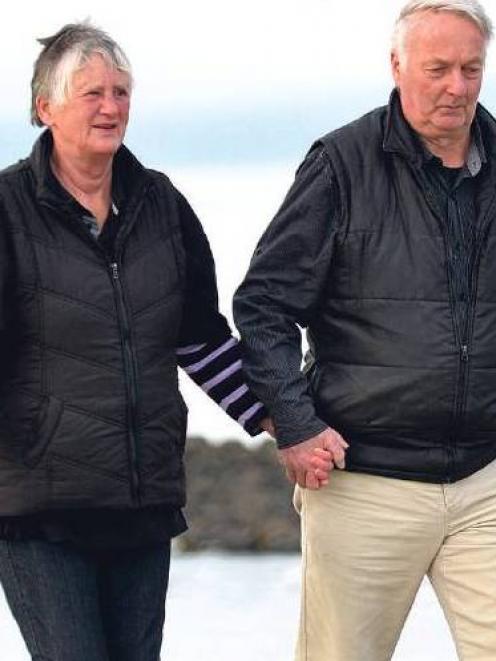 Pam and Paddy Paterson enjoy a walk on the beach at Kaka Point yesterday. Photo Peter McIntosh
Pam Paterson mercifully remembers little of the night two strangers broke into her home and viciously bashed her.

The 66-year-old was found by her husband, Paddy, battered and unconscious on the floor of their Kaka Point living room on December 8 last year.

''When he found me, he thought I was dead,'' Mrs Paterson recalled yesterday.

Her injuries included a fractured skull, subdural haematoma and fractured eye sockets. Her jaw was broken in three places.

''When I came to, in hospital, I just couldn't believe what had happened to me. I didn't even know them. I'd never seen them before. Why did they do this to me?''

In the Dunedin District Court yesterday, Zane Tiatoa Currie (19) and Daniel Tipene Te Moananui (34) were jailed for the attack.

Mrs Paterson said she still had not pieced together details of the attack.

''I only remember little bits. When I was at Isis, learning to walk again, a podiatrist said to me: `I hope you don't remember, Pam'.

''I do remember that it was a beautiful day and it was so sunny when I got home that I opened the back door. I think that's how they got in. I never used to lock the doors here. I lock them now.''

Mr and Mrs Paterson operate the Point Bar and Cafe at Kaka Point.

''I started coming back to work about two months ago. Just for one or two hours, at the start, because I'd get too tired.

''I still have trouble seeing people.

''My brain concentration has been affected. They injured my brain.

''The community here has been absolutely fantastic, just incredible. Everyone has been so supportive. People from all over South Otago have been coming in to give me hugs.''

Mrs Paterson did not attend yesterday's sentencing, although her husband went to see justice done.

''I had a bad day [on Tuesday] and Paddy didn't want me to go. He said it would be too upsetting for me.

''The worst thing about this, for me, has been the loss of independence.

''I've had to rely on everyone to help me. That was the major problem.

''I've always been a very independent person and never had to rely on other people before.''

Mrs Paterson said she was pleased with the outcome.

''That's all I wanted from the start - for them to say `We hurt Pam Paterson','' she said.

''I just hope this stops someone else from doing what they did.''