By John Lewis
0 Comments
The Wild Dunedin Festival no longer consists of walking and talking about the city’s great outdoors and wildlife.

For the first time in its history, elements of arts and culture have been added.

Co-ordinator Jeannie Hayden said the event was created in 2016 by a small team of enthusiastic Dunedin residents with a passion for wildlife and wild places, and included tours of the Sinclair Wetlands, the Otago Peninsula, Orokonui Ecosanctuary and Otago Harbour.

This year’s festival will run from tomorrow until April 28. The programme contains more than 70 events. 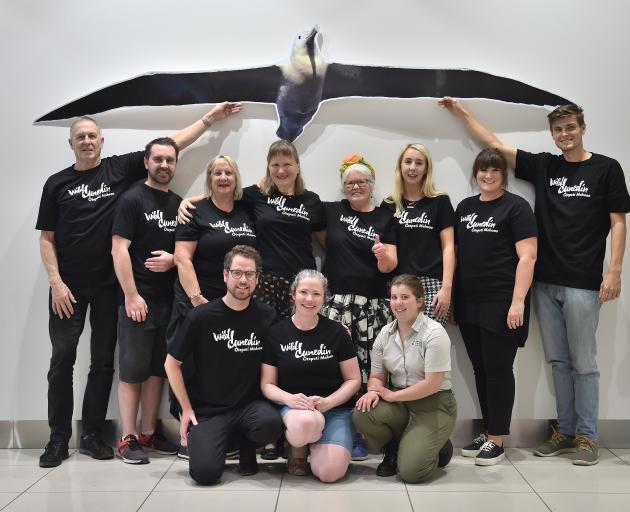 The Wild Dunedin Festival committee (back, from left) Neil Harraway, Chris McCormack, Kerry Buchan, Suzanne Middleton, Jeannie Hayden, Taylar McNeilly, Rachel Cooper, Taylor Davies-Colley; (front, from left) Charlie Buchan, Steph Godfrey and Emma Salmon, show the impressive 3m wingspan of the Northern royal albatross at the Golden Centre in Dunedin yesterday. PHOTO: GREGOR RICHARDSON
She said the festival would start with one of its most popular events, the Seven-by-Seven Wild Talks, in which seven speakers have seven minutes each to debate a nature-themed argument.

"But in this year’s event, we’ve changed the theme to include arts.

"The theme will be When Art and Nature Come Together, Creative Sparks Fly.

"I’ve gathered some of Otago’s top artists from different disciplines and some of the region’s top scientists, to talk about their vision of art in nature.

"One of the speakers is going to talk about the artistic ability of spiders."

She said MC Suzy Cato and the audience would decide the winner of the debate, and proceeds from the event would go to the Dunedin Wildlife Hospital.

"That’s our opening event, so hopefully that will get everyone’s juices flowing."

Ms Hayden said the theme of this year’s festival was "Rewilding", and aimed to encourage Dunedin residents to restore natural habitats, native species, and reconnect with nature.

She advised people to buy tickets immediately because four of the events had already sold out.

"Most of our events are for limited numbers, especially out in nature, because you can’t have hordes of people.

"If you can’t make it to that event, please release your ticket for those who are on the waiting list."

Ms Hayden said she was surprised at how quickly some of the events sold out, and plans were already being made to expand them to keep up with demand better next year.