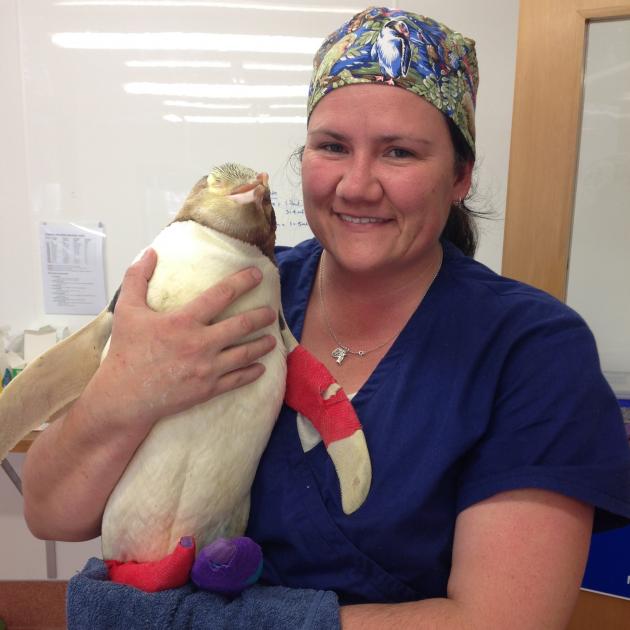 Dr Lisa Argilla, pictured with a yellow-eyed penguin patient, is excited at the prospect of running Dunedin’s Wildlife Hospital from next year. PHOTO: SUPPLIED

Wildlife vet Dr Lisa Argilla is excited to be make the move south to run Wildlife Hospital Dunedin from January next year.

The Wellington-based wildlife vet is house-hunting in Dunedin, as she prepares to make the city her home and to put her considerable energy into getting the wildlife hospital up and running.

"This is my passion, so I can't wait to get started - I want to save as many creatures as I can,'' she said.

It is estimated that Wildlife Hospital Dunedin, which will operate in conjunction with Otago Polytechnic's School of Veterinary Nursing, will have the capability to handle up to 500 animals a year.

The Star is supporting the Wildlife Hospital Trust to get the facility up and running with the "Saving Our Native Species'' fundraising campaign. The fundraising goal is $60,000.

Dr Argilla is delighted to have the support and expertise of Wildlife Hospital co-chairs Steve Walker and Andy Cunningham and trustee Jordana Whyte, as well as Otago Polytechnic, to get the facility established.

"It's perfect that we will be based at the polytechnic. There is nothing more important than educating the next generation on looking after these animals,'' she said.

South African-born Dr Argilla did her veterinary training in New Zealand and Australia, developing her passion for New Zealand wildlife along the way.

She has worked with New Zealand wildlife for many years, starting out as a volunteer and then taking on a residency at Massey University's Wildbase Hospital.

She held the high-profile role of manager at Wellington Zoo hospital for five years, a job which involved a lot of work with native wildlife.

"Birds are my passion, and I always wanted to be a wildlife vet, so it was great to train in a country where the majority of wildlife are birds,'' Dr Argilla said.

Her connection with Dunedin dates back to 2009, when she embarked on research for her masters degree, focusing on the hoiho, or yellow-eyed penguin.

"I have done a lot of work in the South as a wildlife vet, which was how I came to realise that a specialist wildlife hospital is needed there,'' she said.

Over years of working in the field, Dr Argilla has come to see climate change and its effect of sea temperatures, overfishing, and bycatch as the biggest issues facing New Zealand's wildlife.

"I can fix wounds, and raise awareness - the more people who are aware of our impact on wildlife, the more chance we have of getting change.''

Most of New Zealand's birds are "in strife'', she said.

"People see heaps of red-billed gulls flying around, but don't realise that they are listed as threatened - that is a same status as the brown kiwi,'' she said.

"I feel so sad when I think that a species like red-billed gulls, which are so well adapted to surviving with humans, are struggling.

"When you reach that point, you know we are doing something bad to our environment - and that is scary,'' Dr Argilla said.

• The Wildlife Hospital Dunedin Trust needs your support to raise at least $60,000 to fund equipment and a vet nurse’s salary. Ongoing funding will also be needed to help pay for medicines, bandages, and other equipment in the hospital’s first year. All donations, large and small, will make a difference.

Givealittle: Go to givealittle.co.nz and search for The Wildlife Hospital Dunedin.