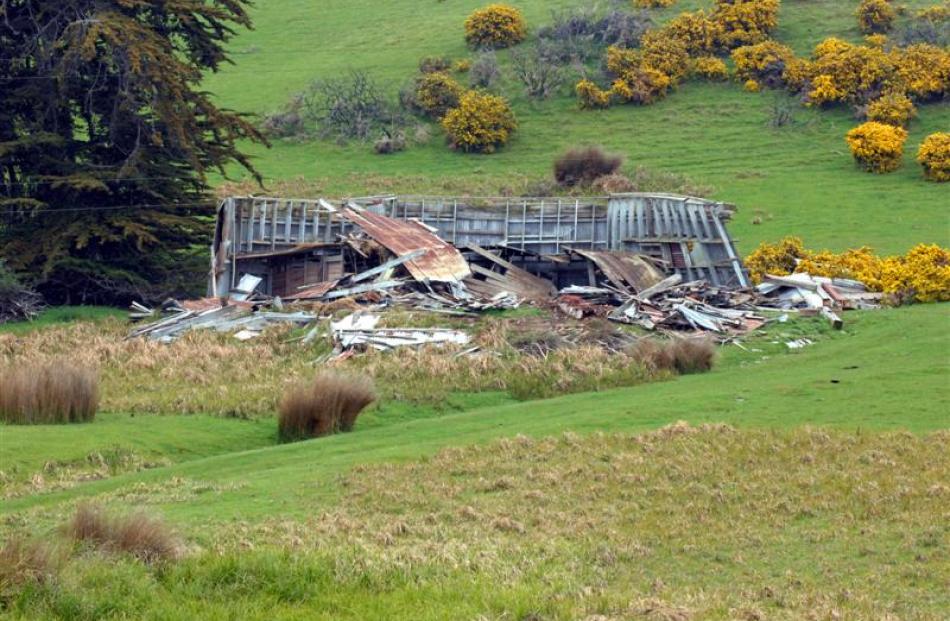 The remains of a large corrugated-iron dome building from the New Zealand and South Seas Exhibition (1889-90), which had been shifted to Kuri Bush, near Taieri Mouth. Photo by John Fridd.

High winds have brought down a striking dome-shaped pavilion near Taieri Mouth, which is believed to be the last surviving building from a world's fair held in Dunedin in 1889-90.

The building, at Kuri Bush, near the intersection of Taieri Mouth Rd and Dicksons Rd, had long been used as a hay barn on a farm previously owned by three generations of the Geeves family.

Colin and Pat Harvey have owned the farm since 1989, and Mrs Harvey felt ''quite sad'' the building had been lost, given its historical significance.

It would be missed by the Kuri Bush community, and she understood it had also been valued by fishermen as a handy point of reference for fishing vessels off the coast.

The dome building occupied a central location in the arts section of the highly-popular New Zealand and South Seas Exhibition (1889-90), located south of The Exchange.

The building was subsequently shifted to Kuri Bush, and at one stage housed a cow byre, hen house and blacksmith operation, before becoming a hay barn.

Mrs Harvey said the building had not been used as a hay barn for at least five years because of doubts about its safety.

Builders who had been approached to undertake repairs had indicated the building had become potentially dangerous to work on and repairs would also have been highly costly.

Peter Entwisle, a Dunedin curator and historian, said he regretted the loss of the building, which was part of Dunedin's heritage.

In the public mind there tended to be a hierarchy in the perceived value of a building's materials.

Bluestone buildings were highly valued, but lower priority was sometimes given to the preservation of some wooden and corrugated iron structures.

He had long publicly highlighted the importance of the Kuri Bush building.

Ivan Geeves, of Dunedin, said he was aware the building had been deteriorating over the years, even before he had sold the farm to the Harveys.