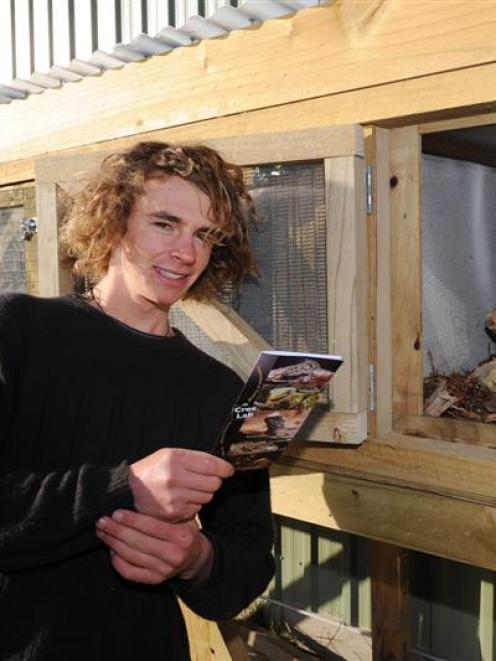 It is hoped members of the public will bring wild lizards injured by cats, dogs, or even lawnmowers, to the hospital, rather than releasing them back into the animal's playground.

"Dunedin residents may see their cat playing with lizards and the lizards dropping their tails.

"This means the lizard is stressed and possibly has other injuries," ecosanctuary general manager Chris Baillie said.

Dr Tocher said injured lizards would be fed honey and a protein supplement, as well as fruit flies.

The cages were in a very sunny spot as it was thought lizards healed more quickly when warm and it also helped keep disease at bay.

"We hope to keep them hot and take the stress out of their environment."

She expected common skinks would be the most likely patients.

Other species that might be injured in Dunedin included the common gecko, the jewelled gecko and the green skink.

Once the lizards recovered, the hospital planned to release them in a suitable, safe habitat.

A Wellington lizard captive breeder, Dennis Keall, would be available to provide advice when needed.

Those with serious wounds that were outside the team's expertise, would be humanely euthanased.

The idea arose out of the many queries Dr Tocher received from people about what to do with injured lizards.

Previously all she had been able to say was put them in the safest place they could.

It was hoped it would help the city's dwindling lizard numbers, she said.

"Hopefully, it'll help teach people about lizards and how special they are."

Ms Baillie said it was illegal for people to handle or keep lizards without a permit from Doc but approval had been obtained for people to bring injured lizards to Orokonui.

Lizards must come from around the Dunedin city area, not Central Otago.

Anyone finding an injured lizard should call the ecosanctuary on 482 1755 to arrange delivery or collection.