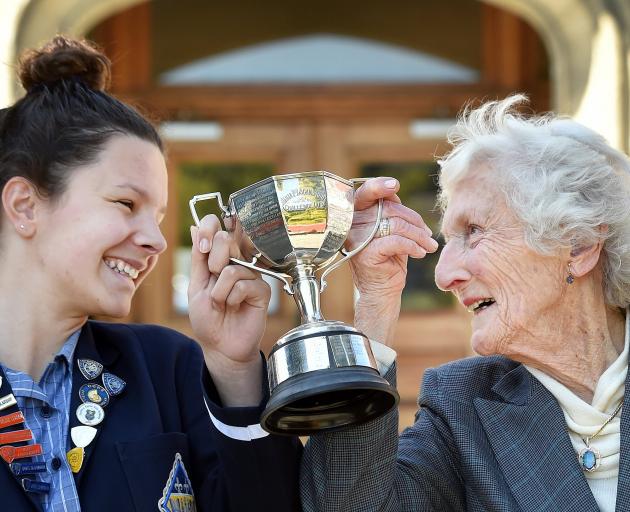 The 96-year-old former head girl returned to the school yesterday to talk to the pupils and take a trip down memory lane.

Mrs Morrison, nee Keller, said she had planned to come back for the 150th jubilee celebration scheduled for this weekend, but it was cancelled due to Covid-19.

She decided she would make her own way down from her home in the Kapiti Coast and spend a few days exploring her old favourite places in Dunedin.

The school had changed a lot since she started there in 1938, she said.

Pupils no longer had to learn French or Latin and geography was no longer taught alongside maths, but the most important change was that girls could study science.

Her one regret from her time at school was that she never had the chance to study science.

She was amazed at how much choice the pupils had, but was concerned that having too much freedom could make things difficult for them, she said.

Ms Morrison denies being a high achiever, despite being the 1942 head girl and joint recipient of the Anna P Logan Stout Challenge Cup, awarded to the best all-around pupil.

Although she was successful, she had a lot of difficulties at school.

When World War2 began Mrs Morrison did not think much of it, but her life changed when two of her four brothers died fighting overseas.

She said was ‘‘incredibly lucky’’ to have gone to a school where she felt so safe and happy throughout those years.

‘‘It was a wonderful, caring place.’’

She ‘‘dare not advise the young’’, however she did have some suggestions on how they could lead a good life.

The secret to life was that you had to make sure to live it, ‘‘because every day counts.’’

She applied this philosophy to her own life and had no misconceptions about her age.

‘‘This will probably be my last visit to Dunedin and I’m content with that,’’ she said.

She had no bucket list and simply planned to keep living each day as it came.