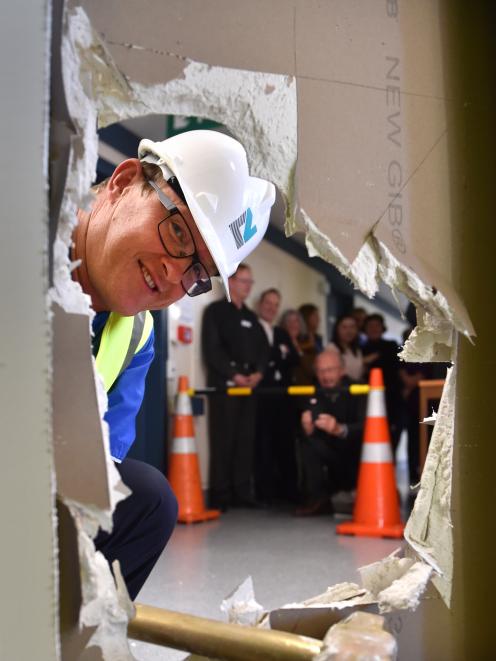 But yesterday was an exception.

General surgery charge nurse manager Kirk Davidson was given the honour of using a golden sledgehammer to begin demolition of a wall on the fifth floor at Dunedin Hospital, launching the construction of new multimillion-dollar intensive care unit (ICU), high dependency unit (HDU) and gastroenterology facilities at the hospital.

Construction of the facilities begins on Monday.

The new gastroenterology facility will be on the eighth floor and will have two endoscopy rooms, and dedicated admission, recovery and sterilising areas.

It is expected to be complete by the end of this year.

The new ICU and HDU facilities will have 22 bed spaces, combined to enable patients to transition between different levels of care in either direction, as necessary, without moving their physical location.

It will also have a dedicated family room for the first time.

The units will meet national and international standards for intensive care, and will enable educational opportunities for nursing, medical, allied and other health staff.

The development will be built in two stages, with the first phase of 12 beds expected to be completed in the first half of 2018 and the second stage by the end of 2018.

Southern District Health Board intensive care clinical director Craig Carr said the new facilities would be an ''amazing improvement'' for patients and family.

Dr Carr said over the years ICU staff had learnt they could improve people's physical wellbeing and make critically ill patients better, but when they were well enough to go home again, they often suffered from post-traumatic stress disorder (PTSD).

The PTSD was caused by sleep deprivation from noisy patient alarms, lights always being on and staff working on critically ill patients overnight.

Many patients were also kept sedated while on life support machines, and all meant their normal day-night cycles were disrupted.

Dr Carr said the new facility would reduce PTSD by reducing light and noise to less than 65 decibels.

''The new unit affords much more privacy for individual patients.

''Families can sit with their relative in a segregated area, rather than a big barn that's open, and that means they're not hearing what's happening with the patient next door.

''We're just so excited and we're really looking forward to this for patients, whanau, family and also for the team, because they've been working in difficult circumstances and doing the best they can for a long time.''

Yesterday's construction launch was organised by the hospital's ICU staff.

Staff paid to go into the draw to win the chance to use the golden sledgehammer, and the money raised would be used to buy artwork for the family room in the new facility.