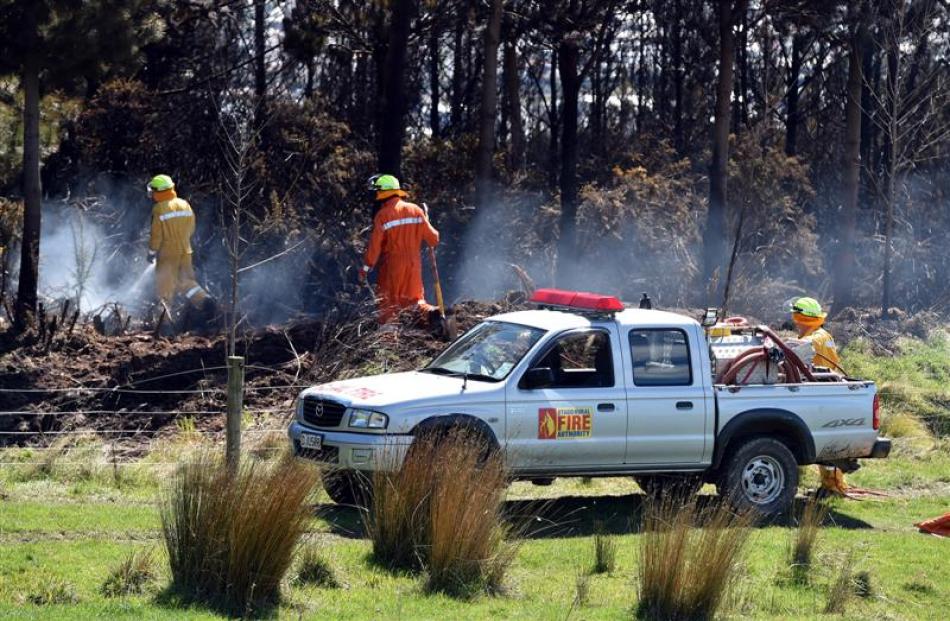 The  blaze which damaged 30ha of vegetation at Saddle Hill posed the biggest fire threat in Otago for nearly 20 years, a rural fire officer says.

Emergency services worked around the clock to contain the blaze, which took hold early on Wednesday afternoon, and will continue to monitor the most dangerous areas in the next few days.

''There were high temperatures, strong winds and relatively low humidity,'' he said.

''To get them all lined up like that meant it was one of the worst fire days since then.''

Firefighters yesterday worked to map out about 20 hotspots in the area identified using an infra-red camera.

The most dangerous of those were put out yesterday, with the rest to be dealt with over the weekend.

One appliance from Mosgiel was called to Saddle Hill to put out a flare-up in pine trees in Coalstage Rd about 1.30pm yesterday.

The fire risk is expected to decrease in the next few days, with light winds forecast and rain expected after that.

They were mainly outbuildings, but two homes were affected: a garage attached to a house in Coalstage Rd was destroyed and a Chain Hills Rd home sustained extensive roof damage.

''Considering the size of the fire and the weather conditions, I would say it could have been a lot worse.''

Although the fire risk was set to decrease, people were urged to keep their gutters clear of leaves and debris, cut back vegetation and keep vegetation green.

The cause of the fire was still being determined.

Mr Harrison said two possible causes were being considered, but declined to elaborate on what they were.