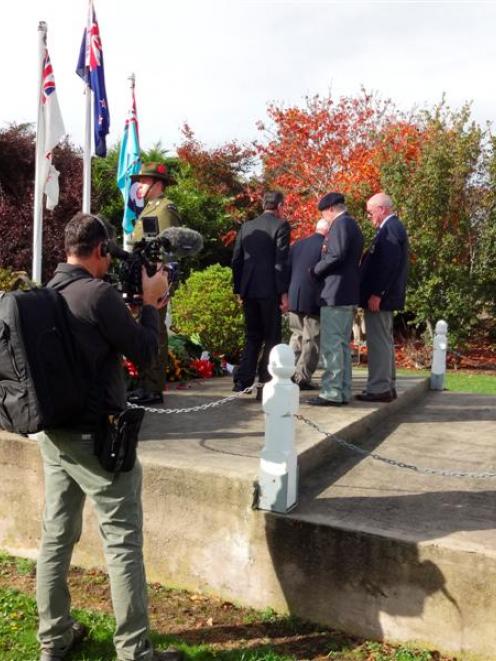 A cameraman films Sergeant Tyrone Rapana, of Waiouru, who is hosting a television series on war-affected families and their secrets, as he queues to place his Anzac day poppy on the Waikouaiti RSA war memorial yesterday. Photo by Bill Campbell.
Television cameras attended Waikouaiti's Anzac Day service yesterday, adding a bit of mystery to what was largely a local affair.

The pair were in the area searching for the World War 1 medals and bagpipes sent back from the Somme, in northern France, by the comrades of Sergeant Thomas Wilson, of Flag Swamp, after he was killed in 1916.

Sergeant Wilson, who is believed to be buried in the Commonwealth war graves cemetery at Cite Banjean, Armentieres, in northern France, had been the bagpiper for his Otago-Southland regiment.

No family of that name now live in Flag Swamp.

Sgt Wilson was a distant relation of the Rapanas and Sgt Rapana's son Tamati shared the name of Thomas - Tamati is Maori name for Thomas.

The Rapanas plan to go to the Somme on May 26, to mark the date of the soldier's death in action.

The TV series will be screened in June and July on TV3.

Record numbers of about 200 people attended each of the Anzac Day services in Waikouaiti and Palmerston.