WW1 quilt back after 100 years away 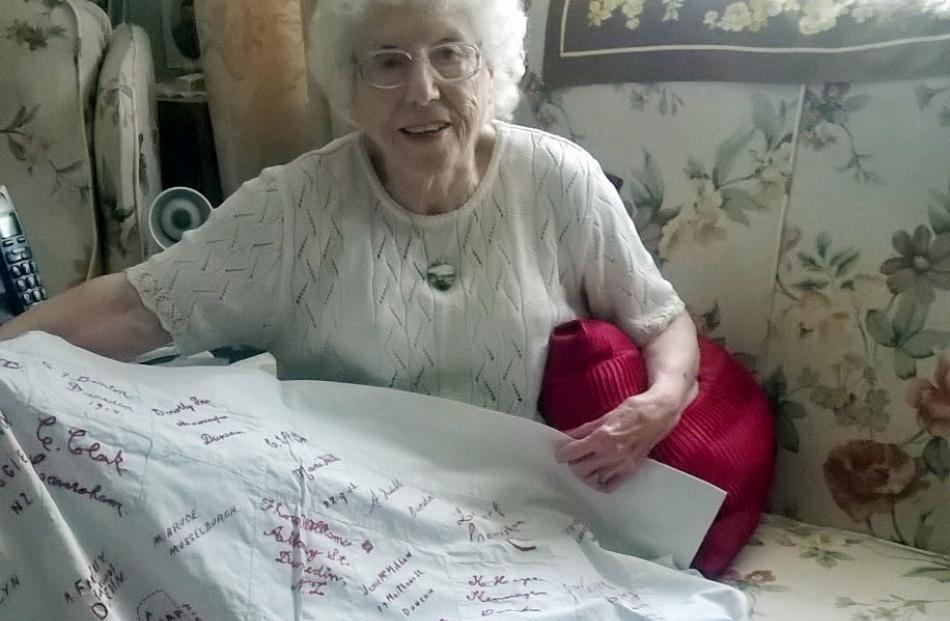 Stella Bessell with the quilt which had been in her family's possession for nearly 100 years. Photo supplied

The tight-knit nature of Dunedin's World War 1 response has come flying back into focus as a quilt made in the city for wounded troops returned for the first time in 100 years.

The ''signature quilt'' was made by Princes St department store Brown Ewing and included dozens of embroidered squares, featuring names and messages from the Dunedin people who added them.

It was sent to Britain at the time New Zealand's seriously wounded troops fighting at Gallipoli were being transported to Britain for medical care.

The quilt would have been allocated to a bed in a hospital for New Zealand soldiers and used as a comforter and reminder of home, Toitu Otago Settlers Museum curator Sean Brosnahan said yesterday.

''The guys being sent back to Britain, from Gallipoli, would tend to have been the more seriously wounded ones.

''I imagine [the quilt] would have been pretty meaningful. They were a long, long way from home and here's this very tangible message from home.''

It was impossible to know how many soldiers would have used the quilt, he said.

''It would have just been on a bed. And you would have been moving people through the beds fairly quickly.''

The quilt, thought to be either linen or calico, was one of five the museum now had and would initially stay in storage, though it would probably be on display in the future, Mr Brosnahan said.

But the story of the quilt was about more than its initial purpose and use, he said.

After the war, the quilt came to be in the family of Stella Bessell.

Now 89 and living in Bristol, Mrs Bessell found the quilt when tidying up her sister's property after her sister moved to a nursing home.

Museum staff member Kim Conroy was holidaying in England at the time and collected the quilt from Mrs Bessell.

The bedspread had been ''special'' to the Bessell sisters since they were children, Ms Conroy said.

''It was a pretty special part of their childhood.''

Mrs Bessell's only request was that the quilt be photographed with Dunedin's mayor and the museum's curator.

Mr Cull said he would ring Mrs Bessell to thank her for the generosity she had shown Dunedin.

''She saw right from when she was very young its importance.''

It was likely descendants of the women who made the quilt would still be in Dunedin today, he said.

''It's a wonderfully generous thing and a very thoughtful thing to do for our city.''