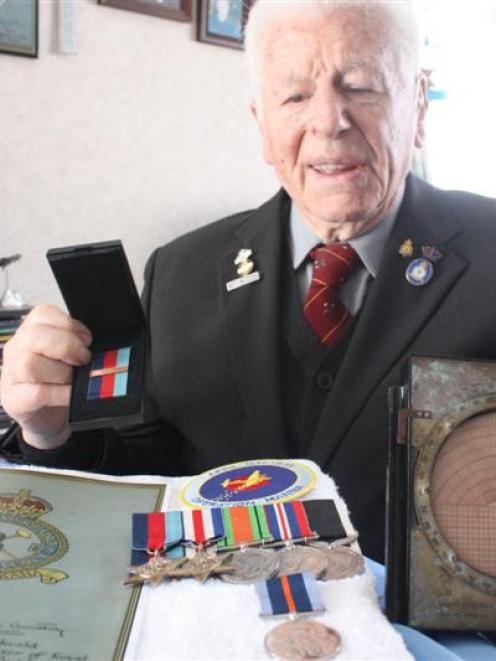 He only wishes those who served alongside him were still around to get the same recognition.

Mr Selwood (89) was a fresh-faced 20-year-old when he flew over Europe in his first mission as the navigator of an Arvo Lancaster in the 75th Squadron of the Royal New Zealand Air Force.

At the recent 73rd commemorations of the Battle of Britain, he was presented with the Bomber Command clasp - which recognises the service of the airmen who were part of Bomber Command.

Because of the controversial nature of Bomber Command - it is estimated up to 600,000 German civilians were killed during the campaign - those who took part had not been officially recognised until last year.

In 2012, Bomber Command veterans were acknowledged with an official service in Wellington and in February the Bomber Command clasp was made available to veterans.

Mr Selwood said it had been a long time coming for Bomber Command veterans, but to be finally recognised for their efforts during World War 2 felt good.

''Unfortunately, for a lot of us it came too late and that is the sad part about it.

''We don't want to promote war but at the time we were doing what we were told and what seemed right.''

A log book and navigational computer still remind Mr Selwood of that time in his life.

''They say your brain doesn't fully develop until you're in your twenties, so there I was not even 21.

''The ones who want peace the most are the ones who have seen the horrors.

''I have 16 grandchildren and I never want them to see war,'' he said.

It was hoped the widows and family of those who had served in Bomber Command would have also received the clasp on Sunday, but none had come forward, Mr Selwood said.

''I think a lot of the widows and families don't know about the clasp, so they haven't come forward yet, but hopefully the word will get out to them, too.''

About 6000 New Zealanders served in Bomber Command and more than 1800 died in combat.

For more information on how widows and next of kin can apply for a Bomber Command clasp, contact the New Zealand Defence Force Medal Office on 0800-334-772.