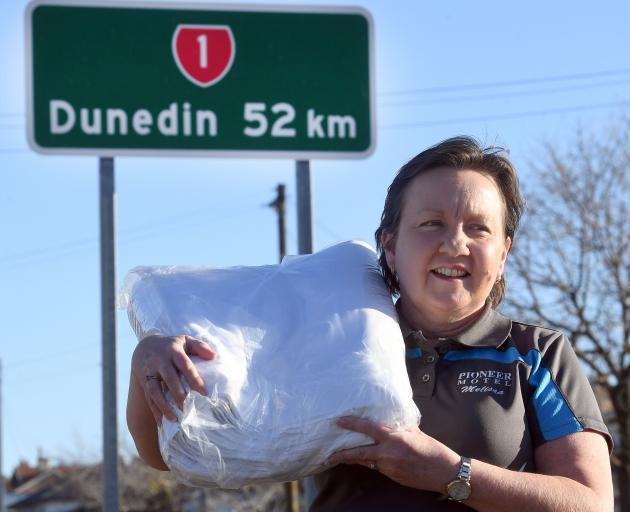 With Dunedin accommodation sold out, Pioneer Motel owner Melissa Armstrong will be making up beds in her Palmerston motel for rugby followers attending Saturday night’s test. PHOTO: STEPHEN JAQUIERY
Rugby fans searching for a place to stay for this Saturday’s test in Dunedin will now need the luck of the Irish.

Accommodation for the game between the All Blacks and Ireland at Forsyth Barr Stadium is nearly fully booked as far away as Milton and Palmerston.

The news comes after Rugby New Zealand announced yesterday the second test was a 28,500-seat sell-out.

Motel Association (Otago) president Pete Firns said bookings for the event had been rolling in since March.

Mr Firns said that because of a multitude of events taking place in the city over the weekend, there was little accommodation left.

He said people often booked accommodation for events well in advance of confirming their tickets.

His motel, 538 Great King Motel, had implemented a non-refundable policy as a counter to those last-minute cancellations by people unable to secure tickets.

The policy does not apply to those unable to travel due to Covid.

He had heard most Airbnb accommodation had also been booked up, so people would need to search further from the city for a place to stay.

The search for a place to stay had led to some rugby supporters making bookings in Milton and Palmerston.

She had a few rooms available after some test guests cancelled when they caught Covid-19.

Like other businesses, she had been taking bookings for the weekend from the moment the game was announced.

Pioneer Motel was still fielding inquiries even though the game was just days away.

"It’s good to have lots of people coming from out of the area. We’re not usually a tourist area," Ms Armstrong said.

The owner of Assure St John’s Court Motel in Milton, Robbie Phillip, said they were fully booked for the weekend.

He said bookings had started flowing in shortly after the test date was announced in April and Dunedin accommodation began to fill up.

She said there was accommodation in the city as a result of cancellations, but people would need to get in quick.