Future clear after it 'clicked into place' 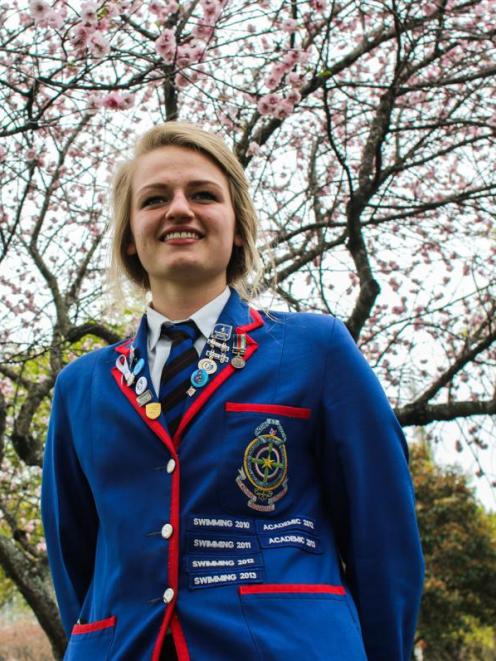 The 18-year-old from Oamaru plans to break the New Zealand women's open record of 53.91sec for the 100m freestyle, held by Olympian Hayley Palmer.

If all goes to plan, she hopes to make an international team, with her sights set on the 2018 Commonwealth Games and the 2020 Olympics.

The St Kevin's College head girl has been swimming as long as she can remember, but it was not until she smashed five Otago records at the New Zealand short-course championships in Wellington two weeks ago that her future in swimming really ''clicked''.

''That was a pivotal point for me, two weeks ago, when I was up in Wellington and it just clicked into place,'' she said.

''It wasn't so much as being hugely motivated when I came back. It was more the realisation to continue with what I was doing because I had to reach that decision: to swim or study.''

She plans to study consumer food science and marketing at the University of Otago next year, but, encouraged by Olympian and national record holding swimmer Hayley Palmer, Ryan is also applying for swimming scholarships at American colleges.

Ryan had only been back in the water for two months before the New Zealand short-course championships in Wellington, having been sick for about a year with glandular fever.

''That was a huge thing to overcome and to actually get back in the water after having it,'' she said.

It was a wake-up call for the Oamaru teenager, who had been pushing herself beyond the limits to fit in training, school, work, family and a social life.

''Something has to give, and in that respect my health kind of gave, so I've learned to know when I'm getting sick, know when to stop and that also came with maturity,'' she said.

''It's been a rough road, but those things define who you are - they kind of make me want to keep going.''

Her main strokes are freestyle and backstroke, but she has been experimenting with butterfly under the guidance of new coach Narcis Gherca.

Before Gherca's arrival at the Oamaru Swim Club, she had about six different coaches in the space of a year, following the departure of Shane Jones.

''I was training under Shane for six years and so it's been quite different, but I think we all needed that change and it's helped me have different training so I can achieve in a different way,'' she said.

Ryan lived with her family in Thailand, before they moved to Oamaru when she was 11. She has only been competitively swimming since the age of 12.

Being based in Oamaru had its ups and downs. For about three years, she has been the only senior girl at the local swim club.

''I've never really had any real competition in Oamaru. It's all been my own motivation, to drive myself forward,'' she said.

When she is not in the pool, Ryan is immersed in study, gaining NCEA level 1 and 2 with excellence, and school leadership commitments as head girl.

With a renewed passion for swimming, she is looking forward to her move to Dunedin.

''I'm about to start a new chapter in Dunedin and be able to train with people who are similar to my swimming capabilities,'' she said.