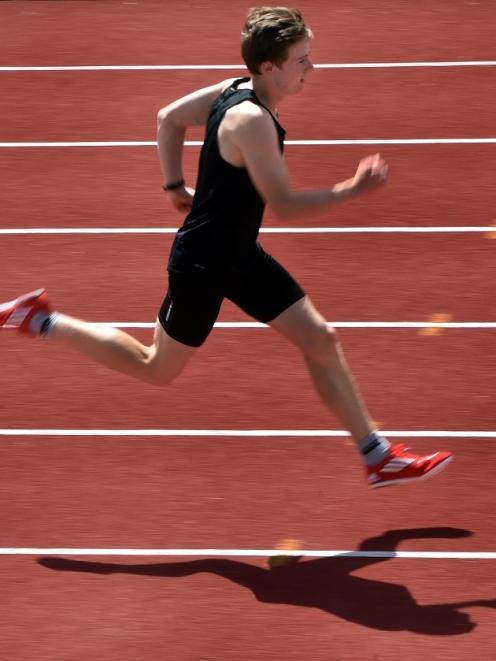 Sam Gouverneur trains at the Caledonian Ground on Monday. Photo by Peter McIntosh.
It is all about athletics for Sam Gouverneur.

The 15-year-old King's High School pupil gave up football this year to concentrate on athletics, particularly the 400m and 800m.

Coached by Megan Gibbons and Joan Merrillees, Gouverneur is busy preparing for the national secondary schools track and field championships in Timaru next weekend.

He will compete only in the junior 400m, after a timetable clash between the 400m and 800m left him with a tough decision.

''If I do both, I would be sacrificing doing well in both. It was a really hard decision. I can't really pick what I'm better at. I looked at the competition and figured I would go for the 400m.''

Gouverneur won the under-15 400m and 800m at the South Island secondary school championships in March, and is aiming high in South Canterbury.

''Definitely going to try and take out the gold. I would be happy with a medal, but gold is what I want,'' he said.

The year 11 pupil spends five or six hours a week training at the Caledonian Ground, and another four hours each Saturday.

His hard work paid off this year when he became the sole Otago athlete to be awarded the Nick Willis scholarship at the Colgate Games in Dunedin in January.

Gouverneur received the scholarship after winning the 14 years 800m and 1500m and finishing second in the 400m.

Outstanding athletes are awarded the scholarship at the annual games, which gives recipients money for sports gear, coaching, travel and other resources to help them in athletics.

Gouverneur followed it up by setting a personal-best and Otago 15 years record in the 800m in February, when he clocked 2min 1.74sec.

Achievements: Nick Willis scholarship recipient on the back of winning the 14 years 800m and 1500m at the Colgate Games in Dunedin in January; Otago 14 years 800m record holder (2min 1.74sec); under-15 400m and 800m winner at the South Island secondary school championships in March.