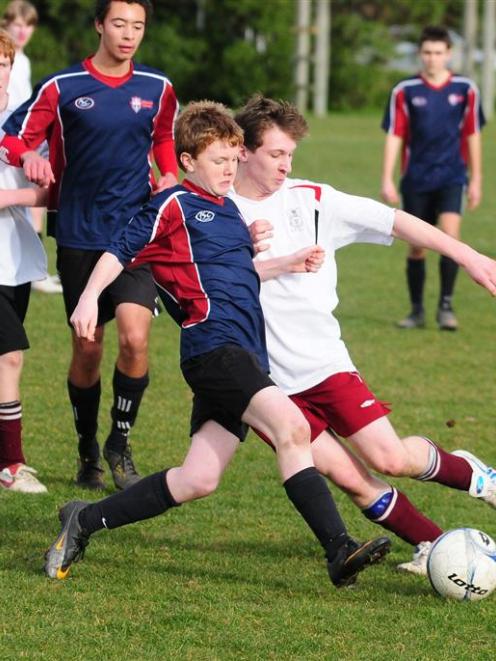 Ben O'Farrell (Kavanagh, left) and Tim O'Neill (Logan Park High) battle it out for possession. Photos by Rab Smith.
In early July a sporting initiative was seen in Dunedin school sport where all five Dunedin co-educational secondary schools came together for the inaugural Co-ed Secondary Schools Winter Tournament. The concept was created by Bayfield High School principal Denis Slowley and deputy principal Mike Beagley. Initial contact with the other schools was met with great enthusiasm for the idea and so an organising committee of sports co-ordinators and senior managers from each school was established Mr Beagley stated that we know we have some of Dunedin's top young athletes in our schools across a number of codes and felt the opportunity to showcase this and hold an event that presented an opportunity for mass participation of our pupils made perfect sense. We often travel out of town for sports exchanges and we know that these are invaluable for our pupils. These can be a costly exercise and for some schools, which usually have exchanges with Christchurch schools, this was not an option this year because of the Christchurch earthquakes. It simply seemed good sense, therefore, to provide a Dunedin-based competition where pupils could challenge themselves and have fun.

The event involved teams from each school competing in senior and junior boys' and girls' basketball, senior A and junior A girls' netball, boys' and girls' football, rugby and boys' and girls' hockey. It was a spectacular sight to see Bayfield Park covered with teams competing for the whole day, as well as both turfs at the McMillan Hockey Centre, as games rolled on continuously. 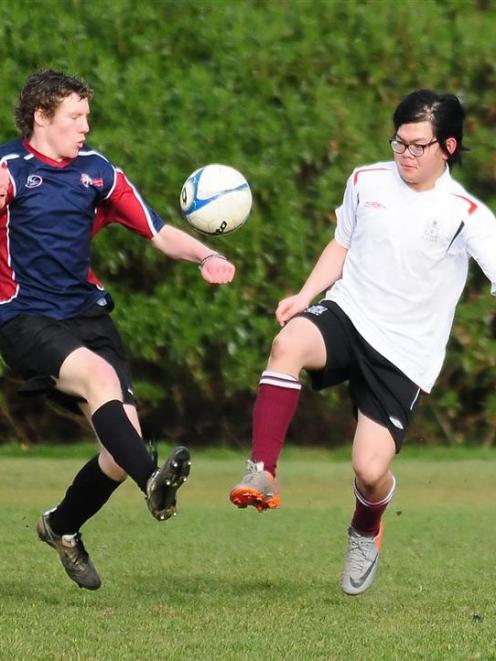 The event involved more than 700 pupils and the atmosphere was typical of the co-educational schools, and pupils supported their teams with great enthusiasm and pride. At the conclusion of the day, all teams converged on the Lion Foundation Arena for the prizegiving, where pupils from each school gave a vote of thanks to the organisers, referees and all involved in making the day happen before the new trophy was presented to the winning school.

The Denis Slowley Cup was named in honour of Bayfield High School's principal of the past 12 years, who retires at the end of this year and who was responsible for the initial concept of the event. While the Bayfield pupils were a little disappointed not to win the trophy for him, they were pleased with their second place, narrowly behind KavanaghCollege, which came out as the overall winner. The finishing places in each event gained points for each school and the honours were spread across all five schools. 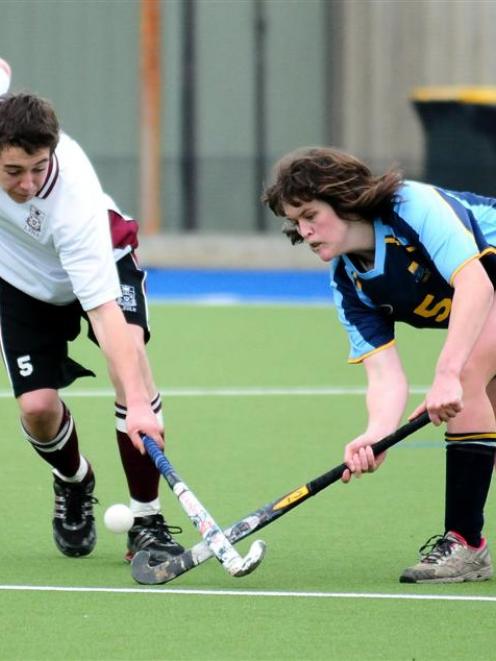 We have been delighted with the feedback we have received from all schools and many parents and members of the community and are determined to see this as a regular annual event in the years moving forward, Mr Beagley said.

Support was received from OSSSA and Sport Otago for the running of the day.

Dunstan High School had five paddlers in the New Zealand junior canoe slalom team that competed at the Pre-World Junior Championships at Wausau, Wisconsin, in the United States recently. They were paddling against junior teams from Canada, the US, South Africa and Australia. All the New Zealand paddlers got into the semifinals, with Robert Hervey and Finn Butcher making the A final. Finn finished third and Robert fifth in the final of the K1 event. The remainder of the New Zealand team paddled in the B final, with Marcus Norbury third and Geoff Johnson fifth.

The team is also racing in Carlton before Finn heads to Europe to compete in some Teen Cup races, Robert heads to Ottawa for a freestyle training camp and Marcus, Geoff and Matthew Arnott make their way home.

The small team performed exceptionally well and all were justifiably proud of their achievements.

Tom Vessey won the premier event, the under-20 boys 30km road race and was second in the 3.4km time trial. Tom is in excellent condition and his confidence is building as he prepares for racing in Australia.

Georgia Vessey rode strongly to gain a bronze medal in the under-16 girls 3.4km time trial and was beaten for third place in the road race by a mere 0.08sec.

George Blackie had an excellent under-17 boys road race, narrowly missing a bronze medal by 0.5sec. In the time trial, he finished a very creditable sixth.

St Hilda's had 19 girls compete at the NZSS Cross Country Champs, which were held in Ashburton in June. Rebekah Greene retained her title by convincingly winning the senior girls 4000m race. This was a brilliant finale for Rebekah's cross-country season, before she travelled to Europe the next day to compete in several track events.

In early July, Waitaki Girls High School travelled down to compete in our annual inter-school. This was a great day with over 150 girls from each school competing in netball, basketball, football, rugby, badminton, squash, wall climbing, hockey and debating.

St Hilda's were winners overall 16-1, with the senior A netball teams drawing 33-all.

After a number of successes in the Otago cross-country series, three pupils were sent to the national cross-country champs in Ashburton. These pupils competed well, with Olivia Ollerenshaw coming 38th in the year 9 girls' race and Ollie and Matt McLelland coming 61st and 77th in their grades.

The senior boys basketball team has had some convincing wins, so has moved up into the B grade and have had two more big wins. The team has done well this year and is still undefeated after nine games.

The senior girls basketball team has had a similar season to the boys with many good wins.

They are at the top of the table.

Netball has been promising this year, with the senior B team being undefeated, even after moving up a grade.

The senior A side is a young team, but gaining loads of experience each week and is off to the SISS Championships next term.

The year 7 and 8 Rippa Rugby team beat Kaikorai Valley College at Waikouaiti earlier this term and will now be heading to the finals at Carisbrook in August, where they will play in a curtain raiser to an ITM Cup game.

This year, in conjunction with the Eastern Rugby Club, the school has managed to contribute substantially to an under-15 team and an under-18 colts team.

The under-15 team had a rough start but is improving with every game and is now having the occasional win. The under-18 team has progressed well, with some big wins and close games.

It is currently third on the table.

It recently played the touring Chevalier College 1st XV from Australia, at EOHS. This was a very close game, but Chevalier came away with a 17-12 win.

The annual sports exchange against Tokomairiro High School was held recently at the Edgar Centre, where there were matches at each year level in volleyball, basketball, netball and touch. EOHS dominated in the volleyball and basketball and came out with an overall win.

Lunchtime sport has been a huge success this term, with volleyball, indoor soccer, orienteering and dodge ball competitions all on the go. All pupils are getting involved and the overall participation rate in sport is on the rise