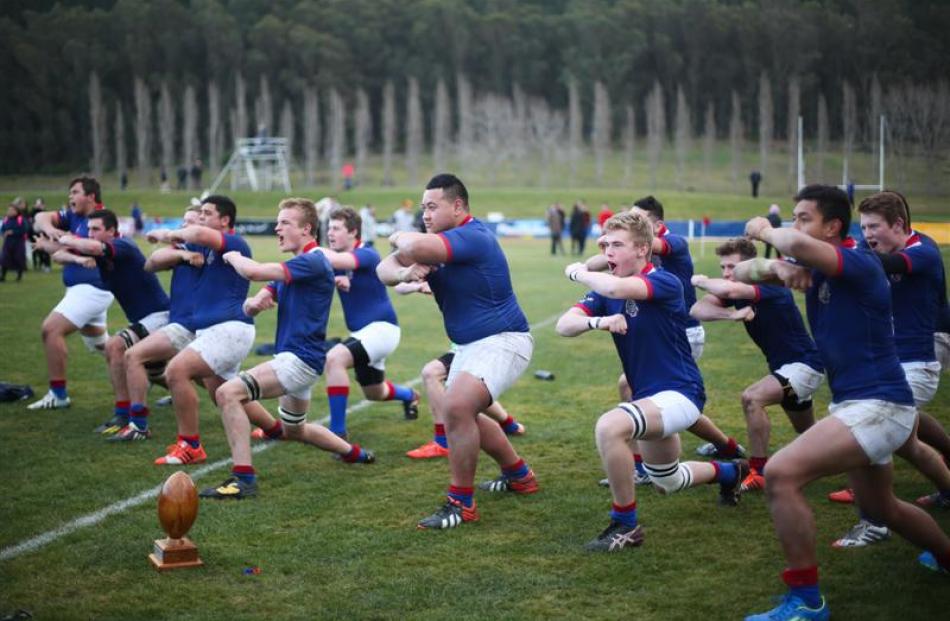 Teams enjoyed the co-ed sports tournament, competing in football, basketball, rugby, hockey, netball and badminton. Logan Park won the girls football and boys' badminton, and was second in both girls and boys hockey.

The netball teams also gained valuable experience in the Otago tournament in June.

Henri Gaudin was the leading Logan Park runner at the Otago cross-country championships, placing seventh in the senior boys section.

Solomon, Joseph, Shae and Ben Dubyk are all training with the Dunedin Football Talent Centre in the holidays.

The student sports council organised an inter-house futsal tournament in the last weeks of term. Both boys and girls hockey teams are training hard for the winter sports tournament in August, and New Zealand luge representative Tayla Ward is training with an eye to defending her titles.

John McGlashan has enjoyed the recent road race and cross-country series run by the OSSSA. McGlashan came out on top in the senior boys Otago-Southland relay held at Milton. The six-man team was 18sec behind with one leg to run but managed to win by 6sec. Oli Chignell has been the standout athlete of the series and his form continued when he won the Otago cross-country. The McGlashan senior teams were first and third. Ruaidhri Brosnan was second in the under-14 race, helping his team to second. Ben Mitchell was second in the under-15 race, which his team won. Oli went on to place fourth at the New Zealand cross-country and gain selection into the national team. Riley and Keegan Hall will attend the national karate championships in Wellington this month. Riley won a bronze medal in the boys 12-13 premier kata at the Canterbury-Westland championships recently. Arthur Burdon, Daine Lowery, Woody Kirkwood, Josh Timu and Luke Jarvie have been named in the Highlanders camp this year. Rory Ferguson was a notable omission considering his outstanding form.

Charles Darling was presented with a cap at a special assembly to commemorate playing 100 games for the McGlashan First XI hockey team.

At the national cross-country championships at Gladfield, the year 9 team of three girls came seventh overall, and first in the South Island. The top individual placegetter was Tahlia Roome, who was 30th in the year 9 race, closely followed by Elsa Neuman, 2sec later in 31st place.

Maddy Campbell was recently part of the New Zealand under-17 volleyball team that beat Australia in the transtasman series.

Larissa Peyroux was named in the Southern under-18 A hockey team, and Mira Neuman in the under-18 B team.

Dunstan's annual sports exchange with Central Southland College took place in Winton on June 16-17. Dunstan came out on top for the second year in a row, winning the exchange 5-3.

Ten teams competed in this year's event and the result was not known until the final match of the exchange when the first XV came away with a 52-3 win. The girls and boys basketball teams were victorious with scores of 37-32 and 74-36 respectively. The boys and girls hockey teams could not be separated as games were drawn 0-0 and 1-1. Both Dunstan netball teams, senior A (26-19) and senior B (39-18), had losses. The debating team had a 281-240 win, which was followed by a 27-0 loss in girls rugby.

The Dunstan clay target team recently competed in an interschool shoot. The team finished first with a score of 263/300.

The school completed the winter interschool programme last week against Southland Boys' with an overall 7-5 win. In basketball, both the senior and junior teams had good wins. In rugby, the first XV gave Southland Boys' a fright before eventually losing 22-20 in an entertaining game. The first XI football team had a convincing 8-0 win and smallbore, trap shooting, surfing and hockey providing King's with other victories.

The swimming sports were held last week at Moana Pool. The standout performer was senior pupil Tame Govaerts, who now holds 23 of the 24 school swimming records at King's - a stunning achievement for a year 11 pupil. The year 9 champion was Nathan Martin and the year 10 champion was Cameron Innes.

At the co-ed schools tournament, Taieri College won the netball and rugby competitions and was first equal in the football and third in the basketball and hockey for an overall result of second top school.

The St Hilda's Collegiate senior A and year 9 A netball teams both won their respective grades at the annual Netball South-Otago secondary schools tournament at the Edgar Centre on June 7-8.

The senior A team went through to the final unbeaten but had to survive a tough encounter against Otago Girls' in the semifinal, turning round a seven-goal deficit going into the final quarter to win 26-24 in extra time. In the final, the team played Waitaki Girls', which had also come through pool play unbeaten. St Hilda's led from start to finish after taking a dominant position in the first quarter and extending its lead throughout to win 34-26.

The junior A team beat Columba College 26-23 in its final. These young players grew in confidence over the two days of play and travel to Christchurch in the holidays to compete at the South Island junior schools tournament.

Eighteen St Hilda's girls entered the New Zealand schools cross-country in Dunedin and raced in fields of 90-120 girls - a daunting task over a very wet and demanding course. The junior girls, who had been very consistent over the cross-country season, won a silver medal in the junior six-person team event. Team members were Kate Higham, Cecilia Crooks, Georgia Mitchell, Suzie White, Brianna Thomson and Sophie Sinclair.

The A netball team won the B grade at the Otago secondary schools tournament, while the B team improved throughout the tournament and gained valuable experience in the junior section. The A team also won the Harraways breakfast challenge and enjoyed having breakfast with the Steel players. Mara McCurdy, Brooke Johnston, Erin Vernon and Lauren Kitto have been selected in the Central Otago under-15 team.

Four runners competed in the Otago cross-country championships. Ethan Kitto was 15th in the under-14 grade, and Daniel Arnesen (15th), Steve Black (22nd) and Tiaan McKinnel (24th) did well in the under-15 grade.

The Central Otago secondary schools basketball tournament was held recently. The Roxburgh team had only a couple of games under its belt before heading to Queenstown to compete in this new competition. The team played others from Wakatipu High School, Cromwell College and Mount Aspiring College, and the games were very close.

Twelve pupils and three staff head to Wanganui as part of the Southern team at the New Zealand area school tournament. South Island and New Zealand teams will be selected after games of rugby, netball, football, basketball and volleyball.

• These articles are compiled by the Otago Secondary Schools Sports Association (OSSSA) which is proudly sponsored by Perpetual Guardian.