For love of music and connection with others 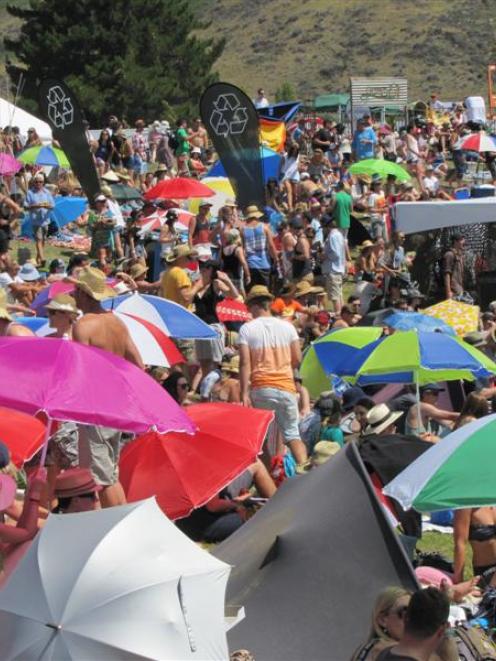 A section of the crowd jostle for position at the Rippon Music Festival in Wanaka last February. The two-yearly event is the country's longest-running festival featuring all-New Zealand music. Photo by Mark Price.
Coachella, Glastonbury, Rhythm and Vines.

Whether at home or overseas, music festivals have always been a ''rite of passage'' for teenagers.

What is it about festivals and their goings-on that appeals so much to us?

Is it the unspoken sense of family felt when under the tent?

Or are attendees there purely for alcohol-fuelled mishaps?

At Byron Bay Bluesfest last year, I gained an insight into what goes on behind the barrier, and it made me ask the vital question: Why do we have music festivals?

The first traces of music festivals can be seen back in Ancient Greece, in the Pythian Games.

Although these games were famed for displays of athletic feats and chariot races, a very significant part of the eight-day affair was four days of musical performance and dance competitions.

Over the hundreds of years that followed, festivals of music and dance became more common in traditions and cultures, and it developed in many ways, shapes and forms.

In the Middle Ages, there were competitive music festivals; 1879 marked the first Irish Music Festival in Dublin; then came 1969, one of the most iconic years for music festivals.

Four days, 32 acts, 400,000 people - Woodstock was listed by Rolling Stone magazine as one of the ''50 moments that changed the history of rock and roll''.

Woodstock triggered a bloom in the festival industry.

World-famous festivals were created because of Woodstock's success, and festival life quickly became a global industry.

Today, festivals continue to be a dominant part of our culture.

Rhythm and Vines 2015 has almost sold out, and they haven't even announced their official line-up yet.

Glastonbury's 2014 pre-sale tickets sold out in a matter of minutes.

What is it that motivates a usually strapped-for-cash teen to splash out $300-$600 for an unknown line-up?

Lynne Christie, from Rippon Festival in Wanaka, said the anticipation and excitement building up to an event was huge.

''R&V are great at that. People love looking ahead to summer and imagining being part of something big, something special.

''Young people are the energy footprint of the future and are vital in showing the public how they want their world shaped.''

She said music festivals used to be seen as a rite of passage for young people, but now the festival spectrum was much wider, with many encouraging families and people of all ages.

''The rite of passage part is possibly because it can be a time when a teenager can first experience an event that is more than a concert, but hopefully a safe, positive, creative experience where they are exposed to different musicians than they might usually get to see.

''It can also provide their first kick-ass memories as a young adult.''

She said music festivals represented where the world was at, and where it was going.

''Just about every human has a connection with some form of music.

''Music festivals offer the opportunity for all different types of people to connect in a venue other than a sports arena or religious structure.''

In 2011, Dr Andrew Bengry-Howell and a group of researchers travelled around a wide range of music festivals in Europe, asking attendees their personal reasons for attending festivals.

''Some talked about freedom and being able to totally forget about your rubbish job in a call centre.

''Many started talking about the pressure they felt under . . . and about seeing festivals as havens.''

He said it was easy to disappear into festivals - switch off your phone and enjoy the ride.

One of the most important reasons to attend a music festival is to experience the atmosphere of community and family felt between festivalgoers.

Reflecting back on my experience at Byron Bay Bluesfest in 2013, I thought of the strangers that surrounded me in the mosh pit.

We were all there for the same reasons, and because of this, we were all connected in an unspoken way.

The minute you step under the tent and into the crowd, you become part of this huge, sprawling family.

Festival crowds are one of the most versatile audiences in the industry.

Performers call out to their audience, asking for us to join in, throw our hands in the air, sing along.

Being dutiful fans, of course we oblige.

We are part-choir, part-Mexican wave, always at the ready to answer the call of the almighty artist.

People go to festivals to escape their everyday worries, to fling themselves into fresh musical discoveries, and to introduce themselves to their new family of hundreds they share the tent with.

It is a deeply imbedded cultural tradition to attend festivals, and we will continue to go for many centuries to come.

We will go for the days of freedom spent aimlessly weaving through crowds, whether in Glastonbury's mud or Coachella's blasting heat.