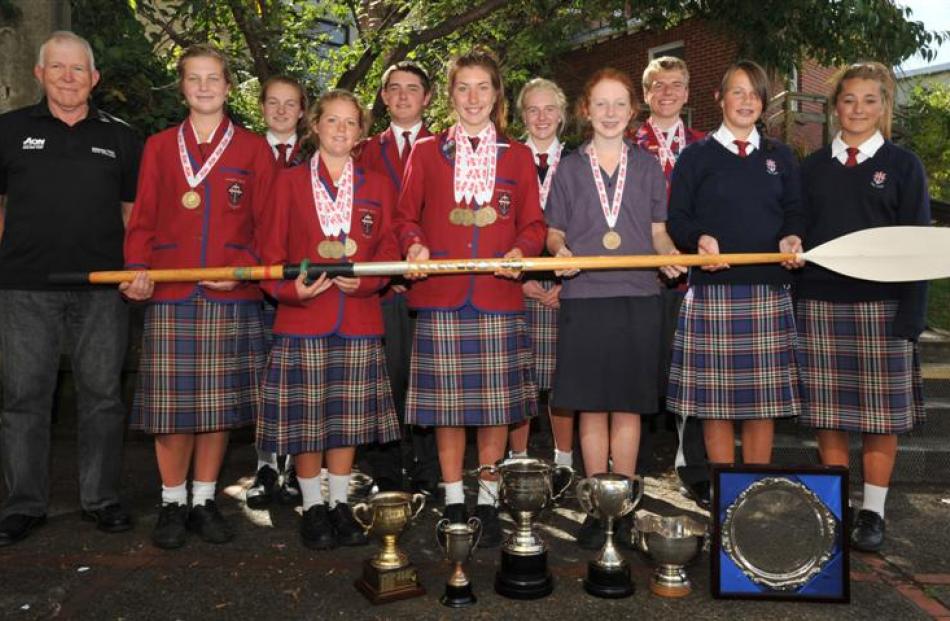 Each group had the opportunity to try eight different activities during the day, out of a total of 24 on offer. Activities included rock climbing, mountain biking, ice hockey, zumba, rowing, judo, squash, petanque and rugby league. Representatives from each of the sporting associations attended and ran their activities for the day.

This year, Neil Mackenzie, the founder of the 1000km Challenge, repeated the expo the following day. Pupils from 13 primary schools attended and tried out unfamiliar sports. With more than 500 pupils involved each day, 1000 pupils took part in the successful event.

Nikita MacPherson and Safire Stenersen are members of the Onyx Militaires under-16 marching team which finished third in the champion technical team, first in the champion display and second overall in the New Zealand championship.

Thomas Johnson has been selected to attend the New Zealand touch elite youth academy for under-17 boys.

Sailing is on the rise again at Taieri College, largely due to the hard work and dedication of the Early family. At the recent South Island schools Sunburst regatta in Dunedin, teams from the college gained a silver and a bronze.

On March 20, teams from Taieri College competed in the primary and intermediate triathlon championships at St Clair. The year 7 girls team won and the year 7 boys were second.

Ben Smith and Liam Harrington attended the Otago secondary schools athletics championships in Dunedin and acquitted themselves well. Ben was third in the under-14 high jump, and went on to win the high jump at the Otago-Southland meet, jumping 1.59m. He now goes to the South Island meeting in Invercargill on April 6.

The girls softball team has just returned from the South Island secondary schools tournament in Invercargill, where it finished fourth, gaining good experience and performing well against older opposition.

Reuben Pyle (captain) and Liam Harrington have been selected to represent the Otago Country under-15 cricket team.

The John McGlashan College First XI cricket team concluded its season by losing in the Gillette Cup regional final to Otago Boys' High School by six wickets. On the way to the final, the team beat Dunstan High School and King's High School. In the local club competition, McGlashan performed well in the second grade men's competition. Michael Rae was selected in the New Zealand under-19 preliminary squad.

The New Zealand track and field championships were held at Mt Smart Stadium, in Auckland, recently. Robert Jopp won the men's under-20 400m in 48.50sec, a personal best by 2sec. Oli Chignall was 10th in the 3000m.

The St Hilda's water polo team finished second in the South Island tournament in Invercargill. After playing and winning pool games against Rangi Ruru and St Margaret's and losing to Southland Girls', the quarterfinal was against Christchurch Girls'. Scores were tied at fulltime before St Hilda's won with a golden goal. The team went on to beat Columba in extra time in the semifinal. A very strong Southland Girls' team won the final, but this was a very good result for St Hilda's and many young players gained experience. Holly Smaill was recognised as a talented player at the tournament.

The touch team competed at the South Island tournament in Christchurch. The team had good wins against Marlborough, Craighead and Lincoln but, after losing to Burnside and drawing with Rangi Ruru in pool play, the team lost to Southland Girls' in the fifth-sixth playoff. Laura McKenzie was selected in the New Zealand under-17 team to play Australia in October.

The St Hilda's cricket team reached the final of the Otago-Southland schoolgirls competition. Blue Mountain batted first, scoring 87, and St Hilda's chased down the target in the 12th over for the loss of one wicket. Caitlin Blakely, with 32 not out, and Polly Inglis, with an aggressive 28, established a platform from which the target was achieved with relative ease. The team now goes on to the NZCT national secondary schoolgirls finals in Palmerston North in December.

St Hilda's sent a team of 13 rowers to the Maadi Cup at Lake Karapiro last week. Many of the crews performed well, with the under-18 lightweight four making an A final.

The First XI cricket team has made significant progress this season, registering its first win over Southland Boys' in Invercargill in over 30 years. There were some outstanding contributions throughout the season. The best of these would have to be the 201 not out Taylor Cumberland made against Waitaki Boys'.

Other significant contributions against Southland came from Bradley Thompson, with bowling figures of seven for 37 in the first innings and three for 31 in the second. Joel Meade also scored 78 in this match. Joel's fine run of form earned him selection for the Governor General's XI that played against the NZ Past Players XI.

The senior softball team won the gold medal at the South Island championships, while the senior touch team also competed in the South Island tournament. The team played some high quality touch and went through its pool matches with relative ease, qualifying for the final against Nelson College. Unfortunately, the team was not quite able to match its previous high standards and had to be content with the silver medal.

The last month has been busy at Otago Girls' High School. Alana Close won the senior girls' 100m at the Otago secondary schools athletics championships and was second in the 200m. At the Otago-Southland championships, the under-16 relay team of Sydney Evans Tobata, Brigid O'Neill, Alex Lesa and Emma Ward won the title. At the same championships, Rosie Craven won the pole vault, Alana Close was second in the 100m and 200m, and the senior 4 x 100m relay team was also second. Twelve athletes have qualified for the South Island secondary schools championships.

Martine Matapo, Holly Johnstone and Kiana Pelasio represented Otago in the under-17 touch team at the national tournament, finishing seventh out of 14 teams. Kiana Pelasio has been selected in the New Zealand under-15 touch team.

Karley Wilden-Palms won the intermediate girls single sculls at the 60th annual Head of the Harbour secondary schools rowing regatta. The rowing team also did well at the Maadi Cup. The under-16 quad of Tabitha Seaton, Ellie Murphy, Georgia de Raad, Karley Wilden-Palms and Daniela Lemow (cox) finished in the top 10 school crews in the country.

The senior A and senior B volleyball teams travelled to Palmerston North to compete in the New Zealand secondary schools tournament. There were 148 teams from around the country. The senior A team finished ninth in division two, its best result since 2008.

A small team of rowers then represented Dunstan at the Maadi Cup. Eirlys Bond, Ella Galletly, Lucy Geddes and Sydney Cook, coxed by Jack Bruce, won bronze in the under-15 quadruple sculls.

The Dunstan girls softball team produced superb performances at the South Island tournament, winning every game in round-robin competition and securing a spot in the final against Southland Girls'. The final got off to a shaky start and, in the seventh inning, Dunstan trailed by two. With loaded bases, Georgia Lloyd stepped up to the plate and not only hit the first home run of her career, but also won the game for Dunstan.

• These articles are compiled by the Otago Secondary Schools Sports Association which is proudly sponsored by Perpetual Trust.