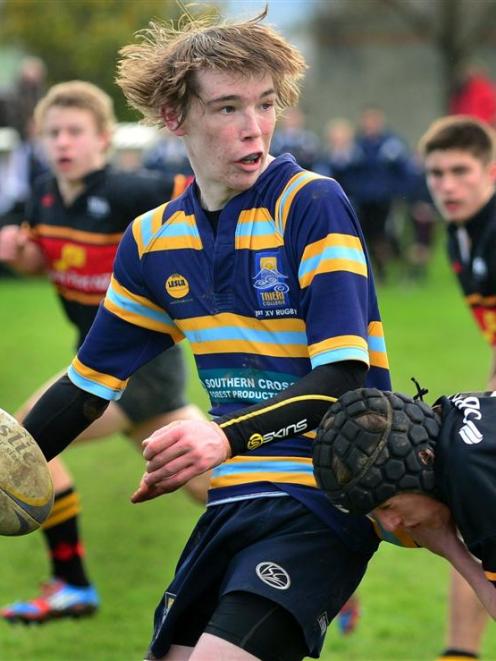 Taieri College No 8 Matt Walker looks for the pass while tackled by James Hargest College defender Jacob Alsweiler during the First XV interschool in Mosgiel on Monday. Taieri College won 17-10. Photo by Peter McIntosh.
Last week, the St Hilda's sports council unveiled an elite sports honours board. The board features old girls who have represented New Zealand at the highest level in sport.

During the holidays, the junior and intermediate netball teams competed at the South Island development tournament in Christchurch.

The junior A team had a successful tournament, finishing runner-up in the year 9 competition. Libby van Harselaar and Laura Taylor were named in the tournament team.

The first XV competed at the festival of rugby tournament in Oamaru, finishing third and being named best all-round team.

Hannah Perkins, Simone Ferguson and Bridget Hendry were named in the tournament team.

A large team travelled to Invercargill to compete in the NZCAF aerobic and hip-hop regional tournament, with many groups qualifying for the national tournament in Dunedin in September.

Gracie Hannagan and Tamsyn Dunphy also qualified for the national event in their sections.

Georgia Vessey was one of 12 New Zealand riders who competed in a four-day event at the Australian road cycling championships in July, and went on to compete in the criterium, the next day.

The road race was on a challenging, hilly course, with the top girls from both countries attending. Georgia was the leading New Zealander and seventh in the overall classification.

Kate Maclean is one of three riders from across the country selected for the Dressage New Zealand under-21 national performance squad for 2013-14.

Dunstan High School kayaker Deahna Shearer recently attended the world junior championships in Slovakia as part of the New Zealand under-18 and under-23 teams.

She was up against the top junior paddlers in the world on slalom courses considerably harder than our New Zealand courses. Leading up to the event, the team also competed in two European junior championship races.

Other Dunstan kayakers - Emily McGimpsey, Max Rayner, Kate Pascoe, Shannon Kelly, Sam McCulloch, Hamish McKay and Jeremy Norbury - have been named in the New Zealand under-18 development team to compete at the Australian championships in January.

Daniel Arnott and Deahna are included in the national performance squad.

The Dunstan First XV has performed well this year and will play Ashburton College in the South Island co-ed final in Ashburton on August 31. If Dunstan wins, it will travel to Rotorua to play in the co-ed top four competition the following weekend.

Samuel Porter and Kate Poulsen were in Hamilton at the national under-18 hockey tournament, where their teams placed seventh and third respectively.

Year 11 pupils Jasmine Neilson and Olivia Ollerenshaw competed in the Dunedin under-17 netball team in the Otago tournament, placing sixth of 10 teams.

For the first time in several years, East Otago High School had enough year 9 and year 10 netball players to enter the intermediate team in the South Island secondary schools championships.

Year 9 pupil Jack Laney is preparing to travel to Lower Hutt for the national secondary schools indoor bowls championships in September after placing second at the Otago junior singles earlier this year.

East Otago's senior A netball team and mixed hockey team are competing in their respective South Island secondary schools championships during tournament week at the beginning of September.

The New Zealand area schools tournament was held in Whangarei in the first week of the holidays.

The South of the South team consisted of pupils from Roxburgh, Lawrence, Maniototo, The Catlins and Waiau area schools.

They competed in netball, rugby, futsal, volleyball and basketball. South won both the A grade and B grade netball. Teams were then selected to compete between each island.

The Logan Park High School rugby team has had a fine season, finishing top of the junior B league.

In the final game, a tight battle against Sassenachs, Logan Park led 24-22 at halftime and stepped up to win 45-22, playing some pulsating rugby. The team has been unbeaten this year with notable wins over King's and Otago Boys' teams.

Eight of the boys have gone to the Otago trials. On the last day of term, a visiting Australian team will be playing against Logan Park at the North Ground.

Kaikorai Valley College is next month hosting cross-country races for primary and intermediate runners and also a co-ed secondary schools event. The course will be challenging, with uphill and downhill stretches, a track through trees and, for the seniors and a stream crossing.

There will be entrants from all over Otago.

Thomas Johnson has been selected for the South Island Scorpions under-17 rugby league squad. The South Island team will play a series of games against North Island provinces throughout September and October, culminating in a grand final on October 19.

Jarrod Casey, the 2012 senior sportsman of the year, travelled to Hamilton with the Southern under-18 hockey team, which finished seventh.

The 9A netball team attended the South Island junior tournament and finished 10th out of 32 teams.

Riley Bungard was a member of the Otago Milk Cup team which spent its holidays in Ireland playing against some top youth competition from around the world.

Tessa Nichol, the girls football captain and coach, has been selected for the New Zealand secondary schoolgirls team to travel to Australia later this year.

The senior boys basketball team broke into the A grade ranks this season and narrowly missed out on the playoffs with a narrow loss to Waitaki Boys'.

The World Taekwondo Federation national tournament was held in Wellington on August 10-11.

Phoebe Lee (year 12) won gold in the women's 2-3 under-55 fight, silver in the North v South team fight,and bronze in the 3-1 division of poomsae.

Khata Pearce (year 9) won gold in the women's 2-3 under-66 fight and was sixth in poomsae.

A large team participated in the regional aerobic championships in Invercargill.

Sixteen have qualified for the national tournament in Dunedin in September, including the following who gained places at the regional event.

Anna-Louise Robinson was chosen to play in the Southern women's ice hockey team, while Rosa Waters competed at the South Island rhythmic gymnastic championships in a group that won silver.

King's High School had a successful open night recently, with most of the prospective pupils being stunned by the number of sports and activities offered at the school.

One of the busiest stations on the night was the sports academies. Jonny Thorn has been selected in the New Zealand under-18 hockey squad. Jonny is the only secondary schoolboy field player south of Christchurch to be included in the squad.

• These articles are compiled by the Otago Secondary Schools Sports Association (OSSSA) which is proudly sponsored by Perpetual Trust.