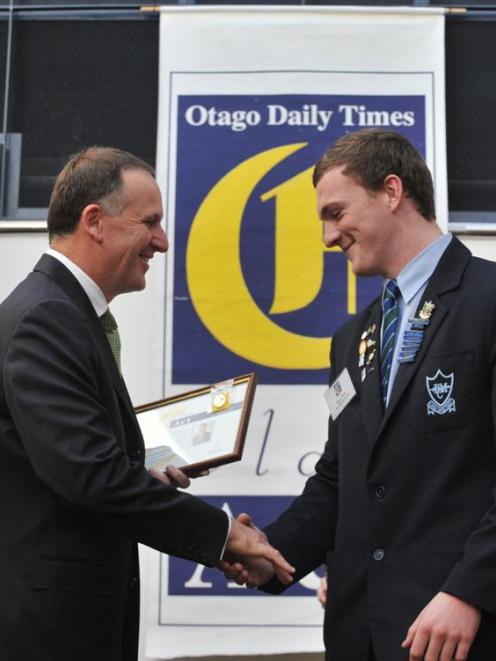 Gavin Stark is presented with his certificate by Prime Minister John Key at the 2013 Class Act Awards last month. Photo by Gregor Richardson.
Blue Mountain College head boy Gavin Stark has seen the top levels of rugby and wants to experience some more.

Stark (17) is just back from a tour of Australia with the New Zealand Schools side.

The side lost to Fijian Schools in Sydney in the opening match of the tour but bounced back to beat Australia A and then defeated Australia in the test 17-16, the first win for the New Zealand side in a transtasman test since 2010.

Stark played in the game against Fiji and then the test, starting on the right wing.

He said it was an awesome couple of weeks as he was exposed to a whole new level of rugby.

''It was a huge eye-opener for me, as far as structure, the quality of training and the pace of the game,'' he said.

''It was pretty much rugby all day, every day. We had two training sessions a day and then we also had a mental skills session every day. So they were long days but were all worth it.''

Stark said the game against Fiji was tough, as the Fijians threw the ball around like a sevens team and ran from everywhere.

Stark was told last year, when he had been in the national schools picture but had failed to make the squad, he needed to work on his defence and he said the coaching team was pleased with his defensive abilities on the tour.

For the next eight weeks he is putting the rugby boots away and focusing on athletics.

He finished third in the final of the senior boys sprint last year but said he will find the going tough at Hamilton, as he will be competing against athletes who have been training fulltime for the sprint.

He is coached by Lorne Singer, of Invercargill.

After Hamilton, the spikes will be put away as he focuses on the Otago rugby sevens campaign.

The national sevens tournament has been shifted from Queenstown and will be played in Rotorua in January.

He has no experience in sevens but will have the speed for the game.

He has yet to sign a deal with any union but said his most likely plan was to head to Dunedin and study pre-trade carpentry at Otago Polytechnic.