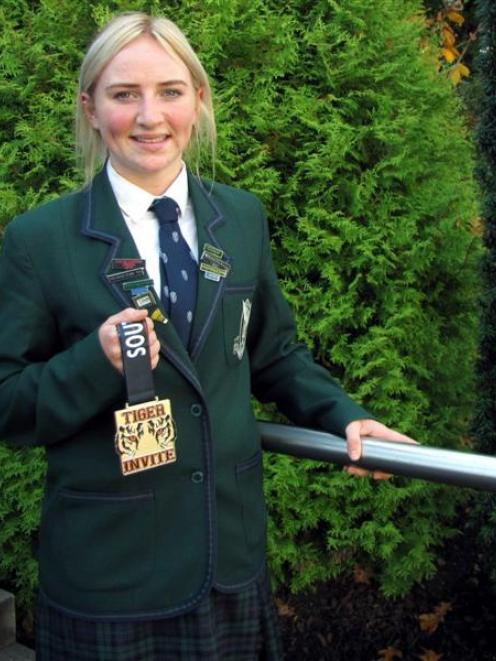 Promising Columba College athlete Maddy Spence. Photo by Adrian Seconi.
Maddy Spence is used to clearing hurdles but most of them have been on the track.

The next big hurdle - or goal, really - is to land an athletics scholarship to attend a university in the United States.

The 17-year-old Columba College pupil is fresh from a three-week tour of the US with the New Zealand secondary schools team.

She won a silver medal in the 400m at the Tiger Invitational at South Pasadena High School.

While in the country, she took the opportunity to check out some of the universities with the team.

''I visited UCLA, Yale, Stanford. We just went around looking at them ones and also San Francisco State University,'' Spence said.

She has to sit her SATs in July and all going well can start filling out applications.

Spence has made quite an impact at secondary school level.

She also holds multiple Otago age-group records in both the 300m and 400m hurdles.

Not bad considering she has only recently switched to longer distances, having concentrated on the 100m and 200m events during the winter.

''It will be exciting this winter to train for the 400m and hopefully have a bigger improvement with that specialised training.''

Maddy took up athletics when she was 7 and has been coached by Brent Ward for the past ''few years''.

Other than picking up an athletics scholarship, one of her other main goals is to qualify for the world junior championships in Russia next year.

To do that she will need to shed almost 2sec from her best time for the 400m hurdles to meet the B qualifying standard for New Zealand.

''Two seconds isn't much. My PB (personal best) for the 400m hurdles was 64sec and I've dropped 3sec this season, so it is definitely an achievable aim.''

The 2018 Commonwealth Games in Queensland is another big carrot helping her get through all the training.

Danica competed in the heptathlon and finished in seventh place with seven personal best performances including four Otago records.

She won the shot put component of the heptathlon.