Young NZ rep out to be cut above rest 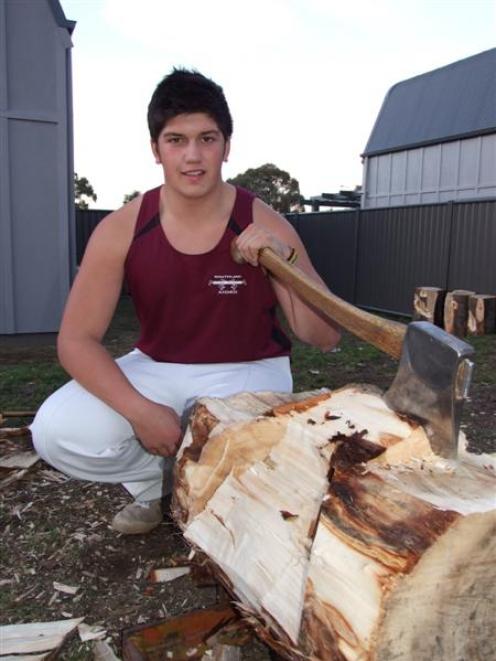 Brad Pako in training for his first taste of international competition later this year. Photo by Lynda van Kempen.
Brad Pako wants to prove he is a cut above the rest when he represents New Zealand later this year.

The national side will compete in Australia at the Royal Melbourne show from September 24 to October 4.

The keen sportsman has just turned 15 and, although he also plays rugby and basketball, his favourite pastime is timber sports.

"It's a great sport and a bit different to what everyone else does. It's just you and the block."

He was introduced to the sport two years ago on the West Coast.

Brad's mentors are his coach, Denis McLaughlin, of Ngahere, Adam Lowe, of Hokitika, and Bobby Dowling, of Invercargill.

McLaughlin, a former national and Australasian champion, says Brad has "a hell of a lot of potential".

"He's just young, but I believe he could have a fair future in the sport, if he stays focused.

He's a big boy but very co-ordinated and his technique is pretty good."

The swings of the axe have to be as carefully considered as golf swings, he says.

"It might take only 30 seconds to cut through a 12-inch log, but it really takes its toll on you and you have to be fit."

The sport is an expensive one, with axes costing up to $700 and travel costs high to compete around the country.

Brad hopes to make it his career after leaving school, earning prize money on the national and international circuits, with his dream being a national title followed by a world title one day.