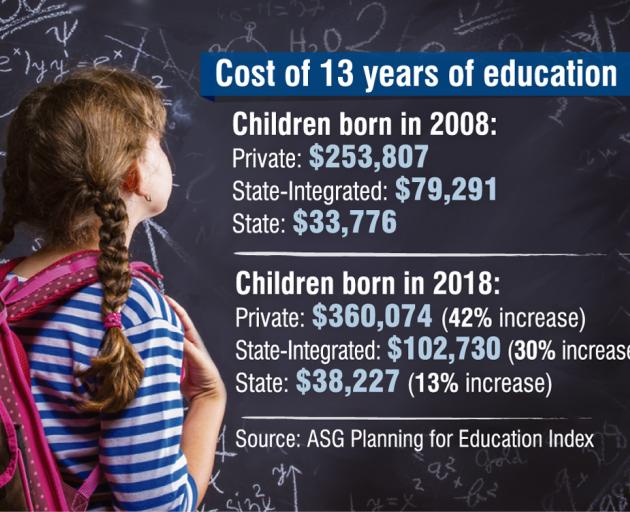 While private education costs in New Zealand have soared, the same cannot be said for  state schools.

The Australian Scholarships Group (ASG) Planning for Education Index has said it will cost 42% more to put a child born in 2018, through 13 years of private primary, intermediate and secondary education, compared with a child born in 2008.

During this period, the consumer price index has risen 18%.

Otago and Southland does not have private schools, but many integrated schools.

The vast majority of pupils, however, are educated at state schools.

Mr Hawkins said school fees continued to be a major education expense, but many parents failed to appreciate the additional expenses associated with funding their children’s education.

Based on more than 2300 responses to the ASG survey, parents who plan to educate a child in the private school system over 13 years could pay $54,784 for other non-fee education costs.

This is significantly more than parents with children at state-integrated schools ($39,614) and state schools ($29,330).

Mr Hawkins said the good news was, despite education costs continuing to rise, the rate of increase was declining relative to last year for state-integrated and state education.

"As a result, a drop in the forecast cost of education has been noted in both these sectors.

"The forecast cost of a state-integrated education has fallen by $6624 compared to last year."