19 children killed on NZ roads so far this year 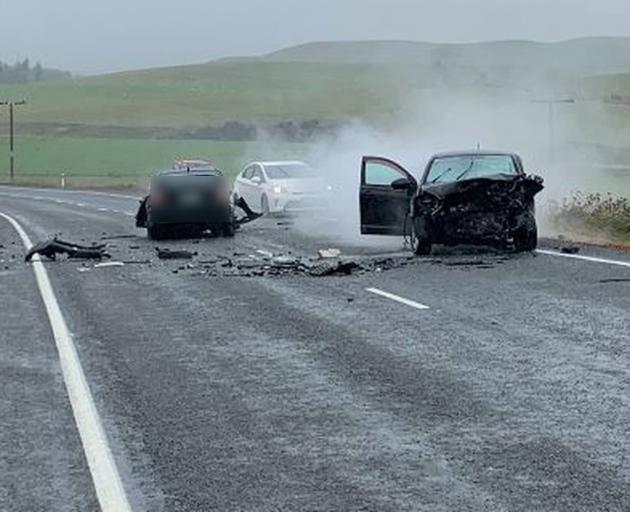 Ten people were injured in the crash that closed State Highway 1 for part of yesterday. Photo: via NZME
The number of children killed on New Zealand roads this year has already outstripped last year's total.

As of yesterday, 19 children aged under 15 had died in crashes, according to Ministry of Transport data.

The figures showed 16 children died last year with 10 of those deaths between January 1 and June 12.

The 19th child to die on the roads this year lost their life in a serious crash on State Highway 1 near Waiouru yesterday.

The two-car collision, in which at least seven others were injured, forced emergency services to close the road.

On the same 10km stretch of road four people had been killed and 16 others seriously injured since 2000.

Caroline Perry, director of Brake New Zealand - a road safety charity - said it was devastating when a child was killed on the roads.

"Every death on our roads is a tragedy but it is particularly heartbreaking when children are involved because their lives are cut tragically short," she said.

Perry said seatbelts in vehicles were designed for adults so it was important they were in carseats.

"When children are passengers it's about ensuring they're placed in a child-seat, but correctly fitted, until they're 148cm tall.

A common factor in children's deaths on the road was the absence of a restraint or seatbelt, he said. Around a third of road deaths for all ages now involved unrestrained passengers or motorists.

"If these people just took a couple of seconds to put a belt on, they'd still be alive."

Eight of the children killed last year were aged between 10-14, six of those being passengers in cars, one a cyclist and the other a pedestrian.

Police Minister Stuart Nash said "death of young people, and any other road user" was an "absolute tragedy".

"There are far too many families who are missing a loved one after road accidents this year. It is devastating to know that many of these deaths were preventable.

"Although road deaths have halved in the past 20 years as a proportion of our population and in comparison to the number of cars on the road, we can do much better. We can work together to reduce the number of deaths.

"The main contributing factors are speed, failure to wear a seatbelt, distraction such as using a cellphone, and impairment from drugs, alcohol, or fatigue."

"During this financial year we will be deploying more frontline officers to the regions," Nash said.

"Police remain out on the roads working hard to keep everyone safe. But they can't do it alone – we all need to be responsible every time we get behind the wheel."

"I helped the driver out of his seat. I then proceeded to help his family out of the vehicle. There were two adults in the back, a mother and possibly grandmother," he told the Herald.

"I had to pin the passenger front door open, bend the top of it and break the window to get an infant girl out of there."

Another child and baby were also removed from the car. At least two people were in the other vehicle, he said.

Meanwhile, Perry said the safety messages which were hammered home frequently were still important to help protect children who were walking or riding bikes near roads.

"There are mistakes that children make just because they're children and they don't deserve to pay for it with their lives," she said.

"When we're around schools, in communities, urban areas, parks and playgrounds [it pays] to be aware that there could be children around.