While six DHBs have yet to publish their 2017-18 reports, it is unlikely any of them will exceed this amount.

(No indication of who this might be paid to is given in Southern’s report.)

These amounts are well above the $230,000 top base salary rate under the Association of Salaried Medical Specialists (ASMS) DHB multi-employer collective agreement (extra would be paid for on-call work).

The high payments were described as unusual by ASMS executive director Ian Powell. While he could not comment on particular situations, he said he expected they would involve unusual and specific circumstances. It was clear the big payments only applied to a "very tiny" number of the 4500 to 5000 specialists working in public hospitals. 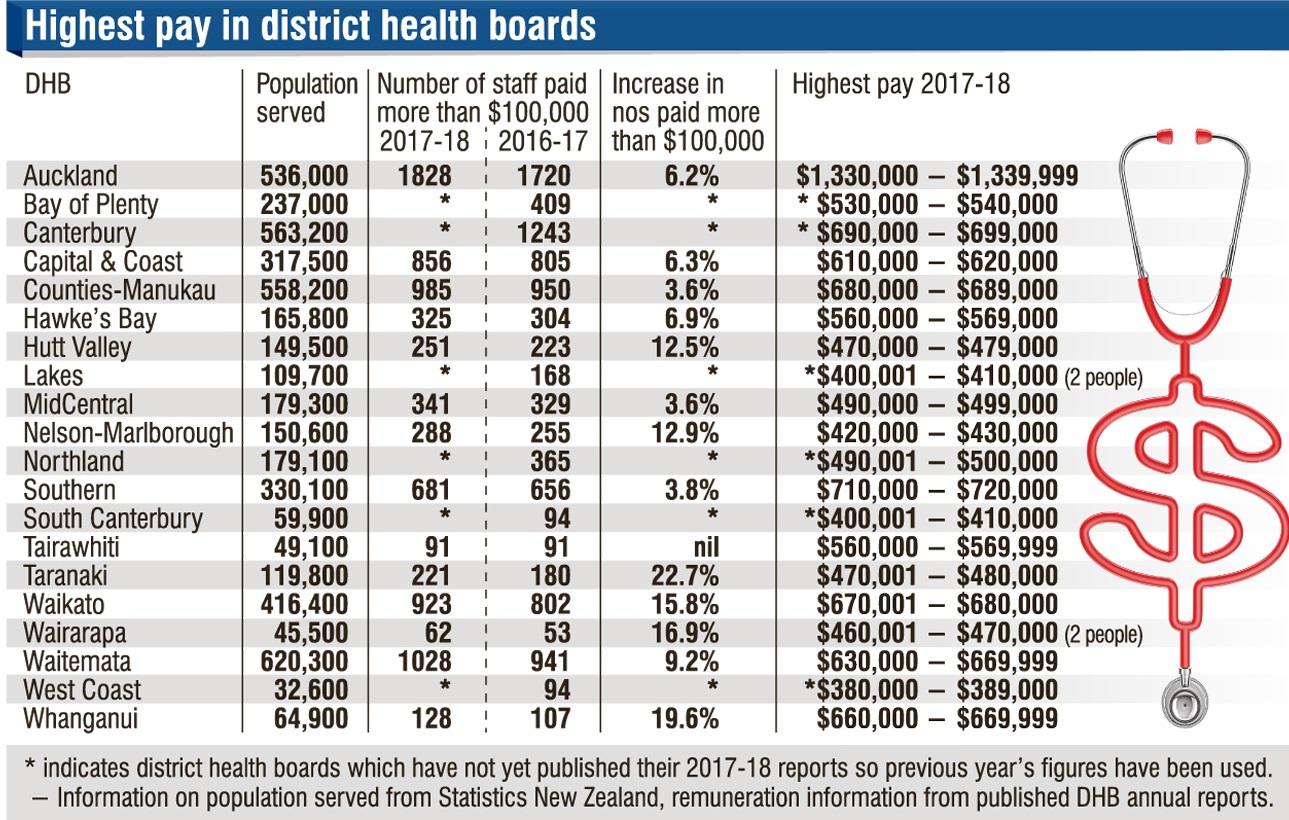 "I don’t see it as being contagious."

All boards are required to show the number of employees (both clinicians and others) receiving total remuneration of more than $100,000 a year in $10,000 bands.

Perusal of the Auckland DHB’s annual reports dating back to 2011-12 show there have been two or three surgeons receiving more than $1 million annually and several others receiving close to that amount.

In the 2011-12 report, reference was made to the highest earners in the $100,000-plus chart being surgeons working in a cardiac model of care which required them to look after one patient,  operate, and remain on call as required.

Notes on the chart in later years follow the same format but omit direct reference to cardiac surgery, referring instead to "a particular model of care".

The reports do, however, all say the board had made a significant push in cardiac surgery, delivering more operations and getting over a peak in demand "while carrying surgeon vacancy".

Extra elective lists on Saturdays (necessary to meet government elective surgery targets) "for which a premium is paid" was also a factor in the high pay.

The Auckland reports all refer to job sizing, where surgeons are paid for unpaid work done over previous years, as another factor.

In the 2011-12 report, the board said it was gearing up capacity for the future by employing more surgeons and "all things being equal, this will ensure better balancing of resources".  Mr Powell said the high payments highlighted both the shortage of surgeons and the pressure on boards to achieve elective surgery targets.

While targets could be useful when they led to systems changes, they were not an indication of performance and  target results could not be used to judge the quality of DHBs.

Less government rigidity about targets would help the situation.

Ideally, surgeons and specialists should only work in weekends when they were required for acute or emergency work.

The highest pay figures did suggest the surgeons were working many hours.  Employing more surgeons would lower those hours and lead to better work-life balance for the specialists, he said.

This was important because the "burnout rate" of specialists in the public sector was about 50%.

Mr Powell said it was possible that some high amounts paid, particularly in smaller services, could involve hard-to-staff specialties.

In 2016-17 Waitemata DHB recorded a payment in the $1,020,000 to $1,029,999 band. Its annual report for that year said the payment related to someone whose role was dis-established and included normal salary payments, redundancy and "associated end of employment payments".

The 14 annual reports for 2017-18 published so far  show only one board, Tairawhiti, has not had an increase in the number of employees receiving a pay package of more than $100,000 over the previous year. The increases for other boards ranged from 3.6% in Counties Manukau and Mid Central to 22.7%  at Taranaki DHB. (Southern’s numbers increased by 3.8%).

In most boards the highest paid person is likely to be a clinician, but at Mid Central the chief executive Kathryn Cook is identified in the 2017-18 report as the top earner there. At Lakes DHB, which has not yet published its 2017-18 report, it appears that in the previous year one of its two highest paid people was likely to be the chief executive Ron Dunham.