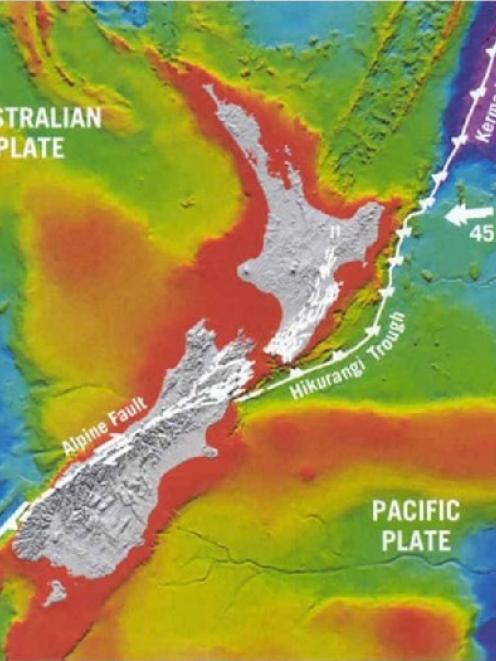 The Alpine Fault runs about 500km up the western side of the South Island between Milford Sound and Marlborough. Photo: ORC

A big quake on the Alpine Fault could block South Island highways in more than 120 places and leave 10,000 people cut off, new research has estimated.

The fault, which runs about 500km up the western side of the South Island between Milford Sound and Marlborough, poses one of the biggest natural threats to New Zealand.

It has a clear geographic record of rupturing about every three centuries - and last year marked the 300th anniversary since an 8.1 quake that shunted the fault's southern side 8m further south in a matter of seconds.

One of a series of scientific papers published yesterday suggested a large event could strand about 10,000 people living in affected areas, along with several thousand tourists.

If these sections were cut off, reaching the West Coast would only be possible via State Highway 7 - and with access only to 50km south of Hokitika.

The study pointed out that 1.3 million travellers visited the West Coast each year and there was enough capacity for 4000 visitors each night in the popular Franz Josef area.

The Milford Sound area alone attracted 650,000 visitors each year - equating to 1700 each day - and in the event of a quake, hundreds could be spread out in the region and on foot.

The study, led by Tom Robinson, of Durham University, in the United Kingdom, suggested the number of tourists requiring evacuation by sea and air would be five times that of 2016's 7.8 Kaikoura earthquake, which was used as a guide in the modelling.

Specifically, the scenario assumed a 7.9 earthquake on the fault, leading to 350km of surface rupture between Charles Sound in Fiordland and Hokitika.

The study said there should be contingency plans for the evacuation of large numbers of people and the provision of emergency supplies to local populations who could be isolated for extended periods.

The study was one of 12 research papers featured in a special issue of the New Zealand Journal of Geology and Geophysics.

One of the papers introduced Project AF8, a collaborative effort to save lives by preparing for a magnitude-8 earthquake on the Alpine Fault.

The lead author, Caroline Orchiston, of the Centre for Sustainability and the University of Otago, said the potential effects of the next rupture on the fault continued to increase as New Zealand's population grew beyond 4.5 million people.

"Project AF8 represents the first effort to co-ordinate disaster response planning for a major Alpine Fault event in the South Island, as well as other large sources,'' Dr Orchiston said.

The project has developed scenarios so South Island communities can plan how they might respond to effects such as road closures, power losses, fatalities, injuries and social dislocation.

Based on the first seven days of emergency response, AF8's planning covered such factors as the shelter and care of displaced people including the potential for tens of thousands of tourists, an immediate medical response and the restoration of priority telecommunications.

A Tier 4 national Civil Defence exercise was planned for 2020 to build awareness and resilience and test the planning and national response capability.