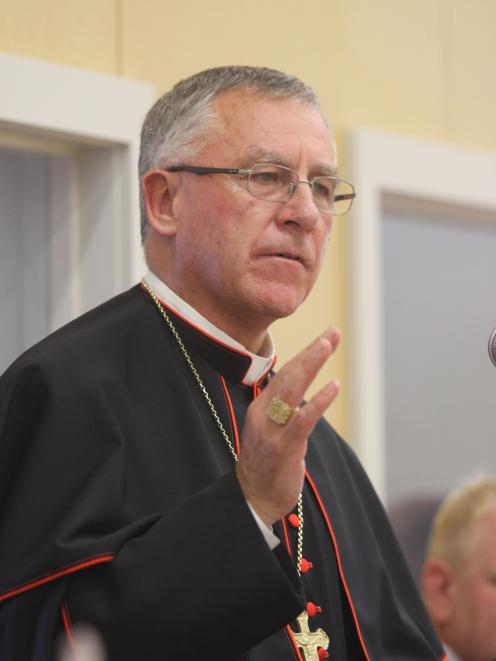 Cardinal John Dew described the abuse as unacceptable and indefensible, and said the church was deeply sorry. Photo: ODT files
An apology from the Catholic Church to abuse survivors has been slammed as shallow and only intended to satisfy the general public.

Cardinal John Dew made the apology, the first formal apology to victims, at the Royal Commission into Abuse in Care yesterday on behalf of the bishops and congregational leaders in New Zealand.

He said the church could offer no excuses for the actions that caused harm, and the abuse was perpetrated by people, such as priests, brothers and sisters and lay people that victims should have been able to trust.

He acknowledged the abuse caused pain, and trauma which continued to have an impact on the lives of victims.

"It was very, very shallow. He was just reading a couple of sentences to satisfy the general public," he said.

Many aspects of this week’s commission testimony from various church representatives had left him speechless, he said.

Those giving evidence had been quizzed on the process in which survivors’ claims were investigated by the Catholic Church’s National Office for Professional Standards.

"Challenging would be an understatement."

He renewed calls for an independent body to investigate claims of abuse by religious institutions.

At yesterday’s hearings Cardinal Dew described the abuse as unacceptable and indefensible, and said the church was deeply sorry.

He said the systems and culture of the church allowed abuse to occur.

"These systems and culture failed you and must change.

"We apologise for the time we or our predecessors protected the church and not you."

He said the church failed to listen to survivors, learn from them and refused to hear what they were saying.

"We acknowledge this compounded the hurt and suffering and acknowledge the ongoing physical, emotional or spiritual trauma you experienced."