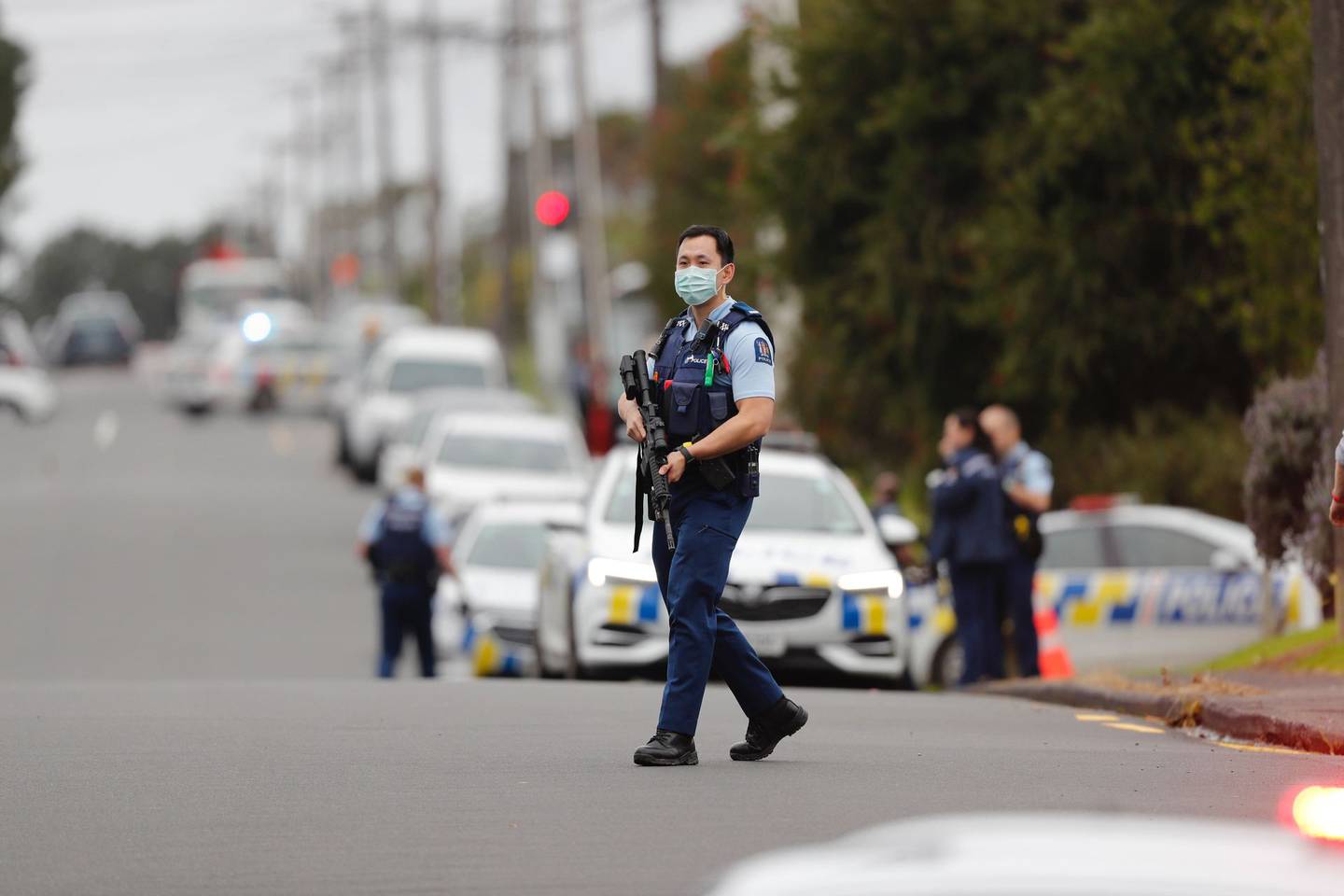 There was a heavy armed police presence in Bardia St during the incident. Photo: Dean Purcell
Armed police swarmed on a house on Auckland's North Shore today after reports of a gunman in the area plunged nearby schools into lockdown.

Police surrounded a house in Belmont's Bardia St, pointing guns at it and using a megaphone to order those inside the property to come out.

A woman exited the property in extreme distress, saying she had been hiding on the ground for the past two hours.

Around 2.30pm It was understood police were still searching for one person.

Bardia St was cordoned off at both ends for a time. The cordon was lifted at 2.15pm.

Earlier, at least eight police cars, including a dog squad, were at the scene for more than 90 minutes. Armed officers could be seen crouching behind vehicles for cover.

Police officers were communicating with the house occupants, saying "this is the armed police", "we're surrounding the house", "come to the front door with nothing in your hands".

About 12.30pm armed officers - some with shields - swooped on the property, taking up position beside a police car in the driveway of the house.

In another incident nearby, a witness told The New Zealand Herald they had seen a bleeding man being arrested on Devonport's Domain St after a car chase with police. The incidents were not linked, police have confirmed.

Belmont Intermediate, Belmont Primary, Bayswater School and Takapuna Grammar School were all put into lockdown following instructions from police and the Ministry of Education. The lockdown has since been lifted. 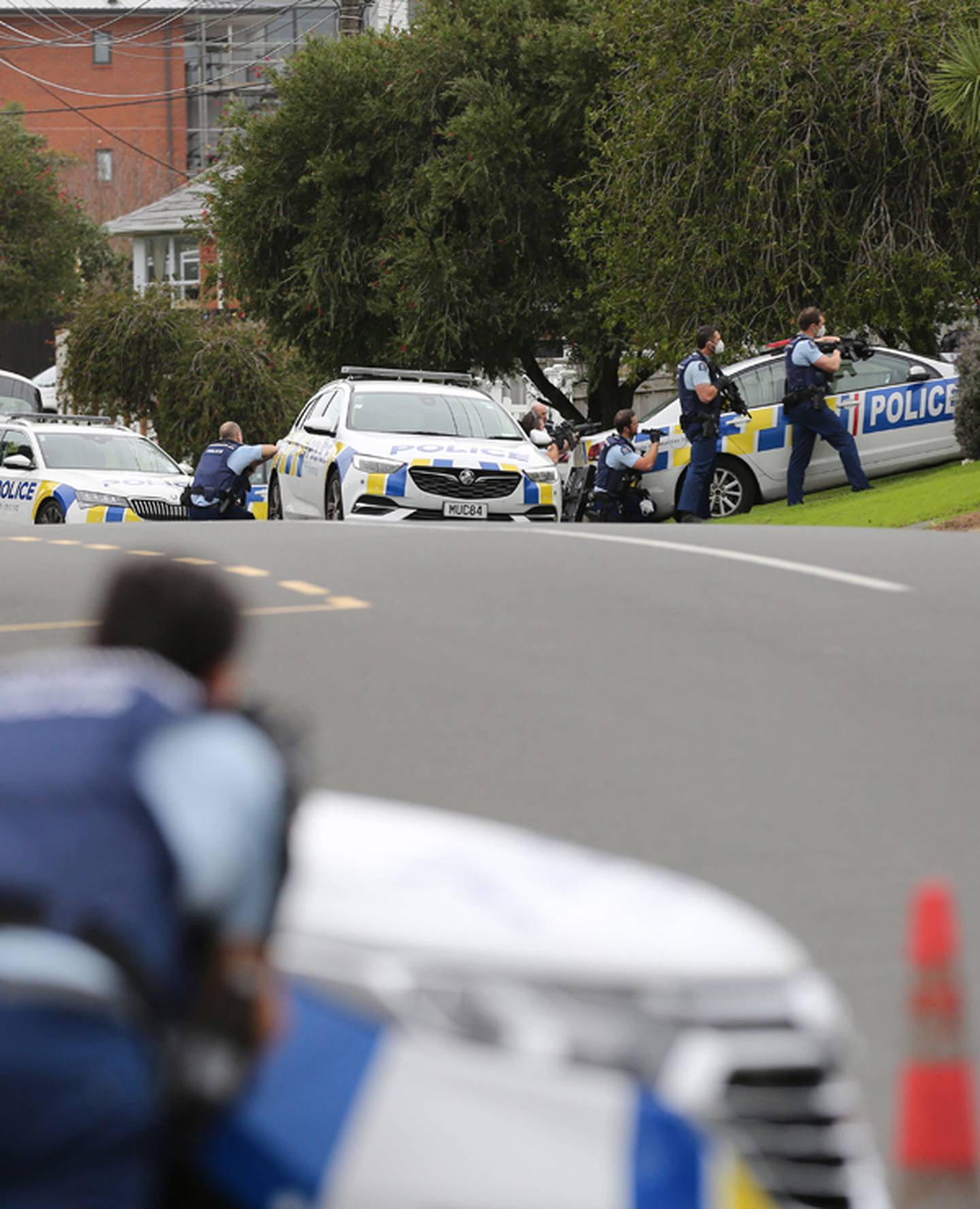 'This is not a drill'

Belmont Primary went into lockdown around 11am after being contacted by the Ministry of Education regarding an "armed incident" in the area, on Moa St, principal Bruce Cunningham said.

The students had practised drills for earthquakes, fire and lockdowns so they knew what to do - "they hide under the table or a bench out of sight and lock all the doors internally."

Students and staff were "fantastic", he said.

"They took it seriously, we said this is not a drill. There was no panic."

Some parents were trying to pick their children up from school but that wasn't necessary, he said.

Students at Takapuna Grammar were reportedly told to get under their desks, according to a text one student sent to their parents.

Police have one person in custody following an incident involving a stolen vehicle in Devonport earlier this morning.

Witnesses have provided photos to the Herald of crashed cars on Devonport's Domain St.

A Devonport resident said she arrived on Domain St around 9.45am to see a line of police cars.

She then heard the crashing of a car and loud popping of tyres. The resident said she thought she saw police ready to lay out a spiked mat to stop cars prior to this.

"A man gets out of the car [that's crashed] and runs to a house and smashes their gate out and then runs into the back garden of the property. The man then runs across the street to another house," she said.

"The man was shirtless and there was a smear of blood on him. I guess because he was in the accident."

The resident said the man was then apprehended on the street by armed officers.

"He looked in his late 20s and was pretty dishevelled."

The resident said she rushed to check on her family in nearby Cambridge Tce because one of the houses the shirtless man who was apprehended ran into shared a fence with her own.