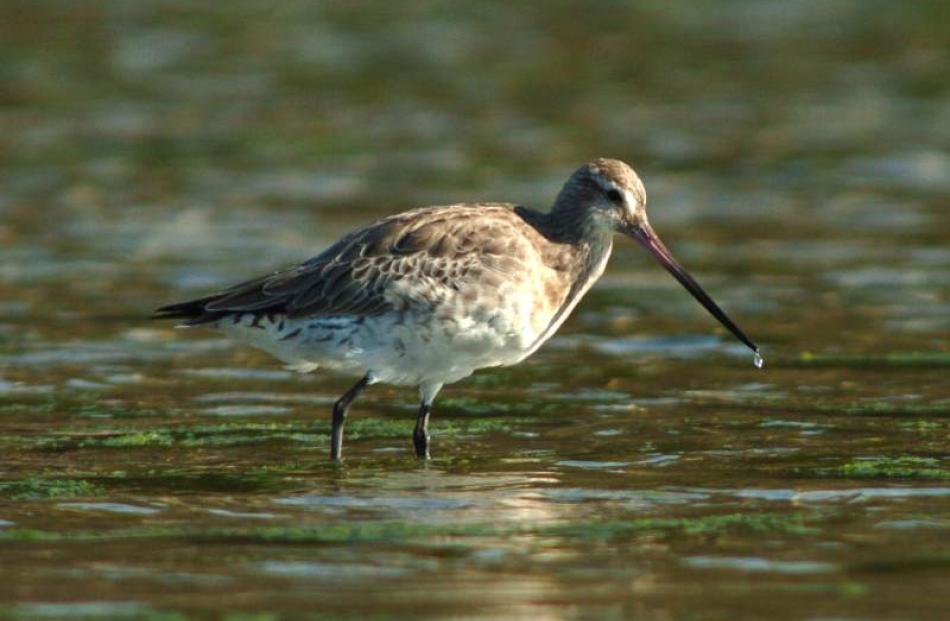 The bar-tailed godwit has been crowned New Zealand's Bird of the Year after three weeks of close competition, heated campaigning and scandal.

The long-distance fliers, also known as kuaka, took the title after voting for the annual competition closed last night.

More than 13,000 people voted for their favourite bird this year, with the kokako coming in a close second, notching up 1814 votes, followed by the kaka with 988 votes.

Bar-tailed godwits have the longest migratory flight of any bird in the world, and travel more than 11,000 kilometres from Alaska to reach New Zealand in less than nine days.

The birds, described as "lunatic" by Forest & Bird, which runs the Bird of the Year competition, begin arriving in New Zealand from late September in numbers reaching between 80,000 to 100,000. Most make for the Kaipara and Manukau harbours, the Firth of Thames, Farewell Spit, and the Avon-Heathcote estuary.

Campaign manager for the bar-tailed godwit, Keith Woodley from the Pukorokoro Miranda Shorebird Centre, said the long flight takes its toll and birds will lose half their body weight during the trip.

"When they get here, they look absolutely exhausted. The first thing they do is have a drink to rehydrate and then they go to sleep," he said.

But the bird's numbers are dropping.

"Godwits coming to New Zealand from Alaska are declining by 2 per cent a year," Mr Woodley said.

"Habitat loss is a massive problem for these birds, especially in east Asia where most of them stop to refuel. And of course, like many of our native species, climate change will pose challenges for them as well."

Mr Woodley hopes the Bird of the Year title will raise awareness for the godwit, other shorebirds and threats to their habitat.

The Pukorokoro Miranda Shorebird Centre has been celebrating the 'year of the godwit' this year, and Mr Woodley said it was "fitting that these long-haul champions have also been crowned the 2015 Bird of the Year".

Earlier this week the competition was hit by scandal after hundreds of fraudulent votes were made overnight on Thursday by someone who had used fake email addresses to vote more than 200 times for the kokako.

A "pair of passionate young voters who managed to subvert their parent's business account" were blamed for the dodgy votes, with their father phoning Forest & Bird to apologise.

The organisation took it light-heartedly, saying: "You have to admire their dedication and passion to see their favourite bird win. It's great to see young people get excited about conservation."

Forest & Bird aims to raise awareness of New Zealand's unique native birds and the threats they face with its popular Bird of the Year competition, asking people to vote for their favourite species.

New Year's Eve event set to go ahead in Chch