If the 19th century was the coal age and the 20th century the petrol age, the 21st century will be the bioeconomy age, Bioenergy Association of New Zealand executive officer Brian Cox says. Reporter Allison Rudd examines the association's national bioenergy strategy and the momentum it has generated since its release a year ago. 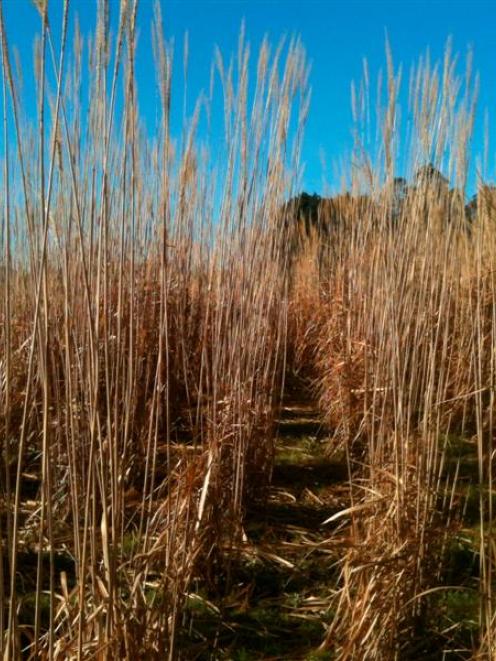 A trial crop of Miscanthus (elephant grass) ready for harvest near Darfield. Fonterra hopes to burn the stalks in the boiler system of the company's new milk powder plant due to open next year, reducing its coal requirements by 20%. Photo supplied.
If there is one word which sums up the New Zealand bioenergy strategy it is potential.

If the next 25 years pan out as Brian Cox and the Bioenergy Association of New Zealand predict, this country has the potential to create a $6 billion a year industry supplying heating and transport fuels to customers at home and overseas.

The economic benefits would be huge, the strategy says. New Zealand's energy supply would be future-proofed through reduced reliance on imported fuels.

Biomass could be an alternative to mining coal. We would squeeze more wealth from our natural resources, including the landfills, animal effluent pits and harvested forests now largely regarded as waste landscapes.

Jobs could be created. More biofuels could be exported, boosting our balance of payments bottom line.

But the strategy makes it clear companies and individuals are not expected to switch to biomass heating or transport fuels en masse immediately.

There are significant barriers, particularly the high cost of building the plants which convert biomass into bioenergy.

But Mr Cox says with rapidly decreasing technology costs, improved research and development, steadily increasing fossil fuel costs and a growing awareness of the need to reduce greenhouse gases, there will come a "cross-over point" when bioenergy will become the favoured option over traditional energy sources.

"It will happen, but it is a matter of opinion when. Some say sooner and some say later. Realistically, the cross-over point is still five to 10 years away."

The bioenergy sector has already developed a firm footing from which to grow, he says.

Anchor Ethanol Ltd, a Fonterra subsidiary, has for almost 30 years been processing the unwanted whey from dairy processing plants and turning it into ethanol used in the production of alcohol, solvents and fuel.

Many wood processors are using wood residue for on-site heating. Some local authorities are manufacturing biogas from liquid and solid wastes and wood pellets are already being exported to Europe and Asia as heating fuel.

A smaller company does the same thing in South Auckland.

However, the strategy aims for New Zealand to do better, saying New Zealand could produce up to 30% of its transport fuel needs and 25% of its general energy needs locally from biomass by 2040.

There has been "very significant movement" in the year since the release of the strategy, Mr Cox says.

That includes an acknowledgement in the Government's energy strategy of the importance of bioenergy and a greater degree of interest from government agencies such as the Ministry of Trade and Enterprise, which recently sponsored a mission to Canada examining emerging bioenergy production technologies.

New Zealand has hosted several investors looking for New Zealand bioenergy production partners and seen a "significant degree of interest" from the aviation industry in the production of bio jet fuel here.

"Interest is snowballing. Once, widespread use of bioenergy was [a concept] still over the horizon. Now it is a reality."

Several companies are investigating their own bioenergy projects.

In Christchurch, researchers are working with a commercial company on producing biofuel from algae.

In Canterbury, Fonterra is trialling 2ha of Miscanthus, or elephant grass, which it hopes will be harvested and burnt with coal in the boilers of a new milk processing plant opening at Darfield in August next year.

If successful, burning Miscanthus would reduce the plant's reliance on coal by 20% and make Fonterra the first company in the world to use the plant as a heating fuel in any significant way.

Mr Cox predicts many opportunities for provinces like Otago and Southland with an abundance of farmland and wood.

The creation of bioenergy from crops and can be a sideline to existing industry such as forestry, farming and wood processing, better utilising resources and creating better returns for landowners, he says.

"Biomass is a co-product in every situation. It's an `and' situation for landowners, not an `or'."

But a co-ordinated approach is needed, he says.

New Zealand should decide which bioenergy technologies will work best here and channel adequate money into research and development. That will in turn boost investor confidence.

He has praise for the Dunedin City Council, which has hired private energy consultant Neville Auton to work for it part-time on energy efficiency and bioenergy projects.

Mr Cox recently visited Stockholm, where the city council is working with vehicle manufactures and others to try and reduce Co2 vehicle emissions within the city boundaries.

"Stockholm was a city investing in bringing people together. Neville is doing the same thing in Dunedin - taking a leadership role - and I commend him for that."

• The association also has links with government departments such as the Energy Efficiency and Conservation Authority (Eeca) and the Forestry Research Institute.

• Has target of lifting the amount of bioenergy used nationally for heating and transport to 25% by 2040.

• Predicts largest demand by 2040 will be for transport fuels such as biodiesel and bio jet fuel.