0 Comments
Director-General of Health Dr Ashley Bloomfield has reiterated the need for compassion and to remain vigilant as New Zealand records its second day of no new Covid-19 cases in a row,

Bloomfield made the comments during a news conference this afternoon.

There are now 1178 cases of coronavirus in New Zealand. Some 402,000 tests have been completed since testing began in February this year.

The number of active cases remains at 22. All active cases have recently returned from overseas and are or were in managed isolation facilities. There have been no cases of community transmission.

Bloomfield told media there was a resurgence of cases in countries where lockdown had been relaxed, noting fresh outbreaks in Melbourne, Australia.

"We do not want to give up our hard-won efforts," he said.

"Yesterday’s developments from Victoria with the imposition of targeted lockdowns reinforce that even countries with strong protocols in place, such as Australia, may need to change tack, sometimes really quickly.

"We have worked very closely with Australia and will continue to do so. We will watch the latest developments closely to see how this approach and the measures they are putting in place, such as localised lockdowns, play out.

"A key takeout for all of us from this is that we must continue to be on guard and vigilant, as individuals, as communities and as a country.

"It’s good news that all of our currently active cases have been caught at the border, and there is no evidence of community transmission. However, we will continue widespread testing of people with symptoms across the community as part of our ongoing surveillance." 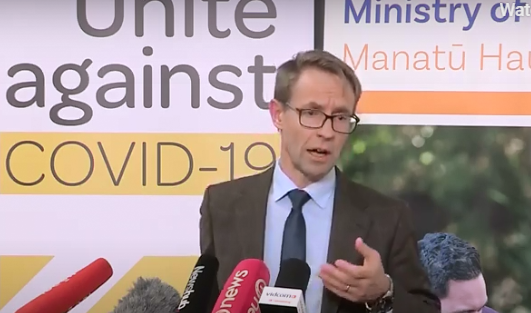 • If you have symptoms of cold or flu call your doctor or Healthline and take advice on getting tested.

• Good hand hygiene will always be a simple and effective tool.

• Keep track of where you’ve been and who you’ve seen to help with contact tracing if we need it. Download the COVID Tracer app and use it.

• Make sure your contact details at your GP or on the app are correct. It’s a simple measure that could make a real difference in the case of an outbreak.

Bloomfield also asked for people to have compassion for those with coronavirus.

He revealed Air New Zealand staff had faced hostility over Covid-19. He had met Greg Foran, the airline's chief executive, who revealed that some staff had been targeted by members of the public.

"I also want to reinforce something we talked about in the very early days of the first cases - it’s also important for us to demonstrate compassion to New Zealanders returning home. This is not a time for discrimination," Bloomfield said.

"I met with Air New Zealand’s chief executive yesterday and he made me aware of some instances where crew following all appropriate procedures are facing some hostility and suspicion in their local communities.

"It’s important to continue supporting each other in these unprecedented times. We have got this far by acting together and we will only continue to do well if we keep doing so."

Yesterday was the first day of no new cases since June 18, as the global total number of cases surpassed 10 million and the global death toll breached 500,000.

The Ministry of Health is now assessing what it will do now with the 367 people it says it has tried "really hard" to contact after they left their managed isolation without being tested.

They are some of the 2159 people who had left managed isolation facilities between June 9 and 16.

Bloomfield said this morning the 367 people posed a very low risk to the community because they had all seen out their 14-day period of isolation.

"[They] are essentially not returning our calls. It is two weeks since they came out of their 14-day managed isolation so we're just having a think about what we do next," he told Newstalk ZB earlier today.

"They know what to do if they become symptomatic but we're not finding any Covid-19 out there, which is encouraging."

Bloomfield said many had moved back to New Zealand without living here for a while so didn't have proper contact details.

"A lot of these people coming back to New Zealand have not lived here for a while, so their only phone number might be an international cellphone.

"Of course, they get out of quarantine, get a new sim card, we then don't have their phone number. They may not have a permanent address and may be staying with friends or with family for a while. It's not straightforward."

Of the 2159 people who left managed isolation facilities, 1284 people have now been contacted and have tested negative for Covid-19.

Eight hundred of these people were tested before leaving managed isolation and the remaining 484 were tested after departure from the facility.