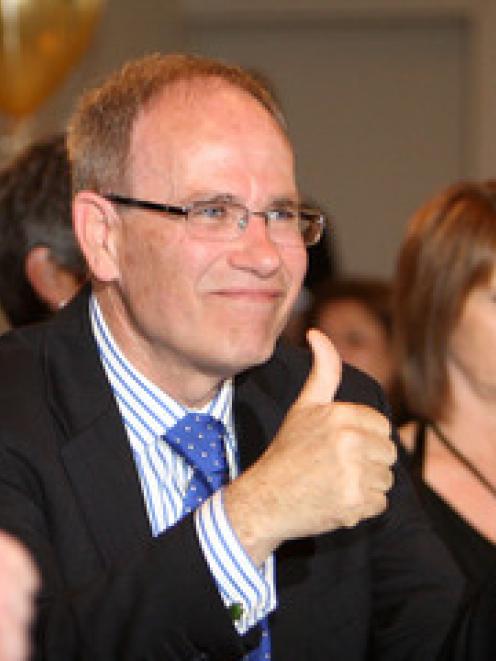 Len Brown
Len Brown is to lead the new super city, Bob Parker is to continue rebuilding Christchurch and results are too close to call in the capital, after polls closed in this year's local body elections and preliminary mayoral results roll in.

Last night Mr Brown partied on top of One Tree Hill after beating rival John Banks by a whopping 60,000 votes.

Mr Key said he was confident Auckland had elected a mayor who could do the job, the Stuff website reported.

"He's set out a vision for Auckland and we look forward to working with him on that vision and building what we believe is the potential for a world-class city. He has the overwhelming support of the people ... and I'm confident he can do a good job. It's a big task in front of him."

Mr Brown will lead the new super city when it comes into force next month. It replaces eight councils in Auckland.

It had been a tough and torrid campaign, he said.

"John and I have given it our very best shot and have covered off all the concerns people could have about how we might and should and could go forward."

High profile candidate Andrew Williams, former mayor of the North Shore, picked up only 3800 votes, or 0.8 percent of the overall result.

A seismic shift in Christchurch's mayoral poll resulted in Bob Parker beating Progressives leader and Wigram MP Jim Anderton, who was tipped to win before the region was rocked by a 7.1 earthquake over a month ago.

Mr Parker said it was "humbling" to be re-elected.

Wellington's mayoral race has resulted in a nail-biting race to the finish with Kerry Prendergast holding onto her mayoral role by a slim margin of just 40 votes ahead of rival Celia Wade-Brown.

Special votes will determine the winner, but final results may not be known until as late as Wednesday.

Invercargill mayor Tim Shadbolt has won his eighth term with a landslide 16,275 votes, ahead of his nearest rival country singer Suzanne Prentice with 5311 votes.

He said he was relieved with the result and thanked the people of the city for their support.

Hamilton has welcomed in a new mayor, with Julie Hardaker pipping incumbent mayor Bob Simcock by 12,520 votes to 11,723.

In a surprise result, Dunedin mayor Peter Chin, who had held the office for two terms, lost his job to Dave Cull.

Retired Wanganui mayor Michael Laws will continue to take a seat at the council table, but as a councillor rather than as outspoken and controversial mayor. Annette Main was elected in as mayor.

In Tauranga Stuart Crosby was celebrating being elected for his third term.

Mr Crosby won the election with a majority of 16586 votes, while Murray Guy was runner-up with 4285 votes.

Lawrence Yule retained his seat in Hastings and Napier incumbent mayor Barbara Arnott kept hold of her seat for her forth term in the job.

In Taupo there was a race down to the wire between Rick Cooper and former Labour Cabinet Minister Mark Burton, with Mr Cooper edging out Mr Burton by 139 votes.

Incumbent Jono Naylor romped to an easy win in Palmerston North by a hefty 15,000 votes.