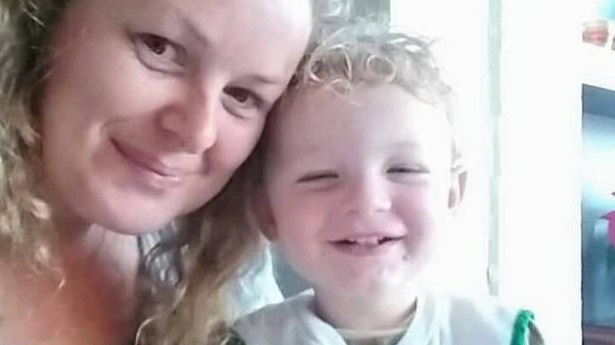 Rebecca Robertson was told she couldn't breastfeed her 20-month-old son in the water of a council pool. Photo: Supplied via NZ Herald
Wellington City Council has confirmed it will ban mothers from breastfeeding babies in the water at pools, saying the feeding poses a contamination risk.

Earlier this year Rebecca Robertson was left shocked when she was told she couldn't breastfeed her 20-month-old son in the shallows of a pool in Wellington Regional Aquatic Centre in Kilbirnie. She was told it breached the food and beverage policy.

The ejection put the council in the spotlight, prompting a call to review the approach to make sure it was fair, reasonable and aligned with best practice.

At the same time council staff looked into the situation, it was discovered WCC had no parenting rooms open across its library and community centres.

Furthermore, a parenting room at council headquarters on The Terrace was turned into a massage room with the view that mums needing to breastfeed or express could use the first aid room instead.

The details come from correspondence released under the Local Government Official Information and Meetings Act.

A new policy has been created for staff when asking a customer not to breastfeed in the water, although a council spokesman said the incident in Kilbirnie was almost unheard of.

The policy says staff should cite the reasons of national pool water quality standard requirements - and the heightened risk of vomiting resulting in pool closure.

"I know there is increased debate now on this subject in the industry but until any change in classification of baby vomit being separated from older people vomit in the standard, I would consider the above a reasonable step for us to take to minimise the likelihood of pool closure", the council's Community Pools manager said in an email.

Messaging will also be put on the council's website and included in existing pool rules notices: "We welcome breastfeeding anywhere public at our pools, however due to health and safety reasons please do not breastfeed in the pool."

The council said it sought advice from a lactation consultant to confirm this conclusion.

La Leche League NZ national coordinator Janine Pinkham said it was disappointing the council hadn't observed the "human rights of the mother to be able to breastfeed wherever she's allowed to be".

When asked about whether baby vomit would pose a risk to hygiene, Pinkham referred to it as "spill".

"Babies spill and they usually spill every feed, it doesn't matter how they've been fed. So a couple of little drops of baby milk is not going to be cause for emptying out the whole pool, surely?

"It doesn't bear thinking about the other types of products that end of in the pool - a little few drops of urine is not going to be noticeable, and we have chlorine, that's what we use to cater for that sort of thing."

Robertson said she was sceptical of the reasoning behind the council's stance and wanted to see evidence.

"If indeed breast milk does interfere with water quality there are many more questions generated. I'm wondering what this might mean for lactating women who commonly leak? It would be very interesting to see how banning lactation would be enforced."

I cannot understand why mothers have to breastfeed their child in a pool. They have an understanding of their child's normal feeding time and can work to those surely.

The other option is to breastfeed outside of the water. Would it be acceptable to drink a bottle of milk while in the water?