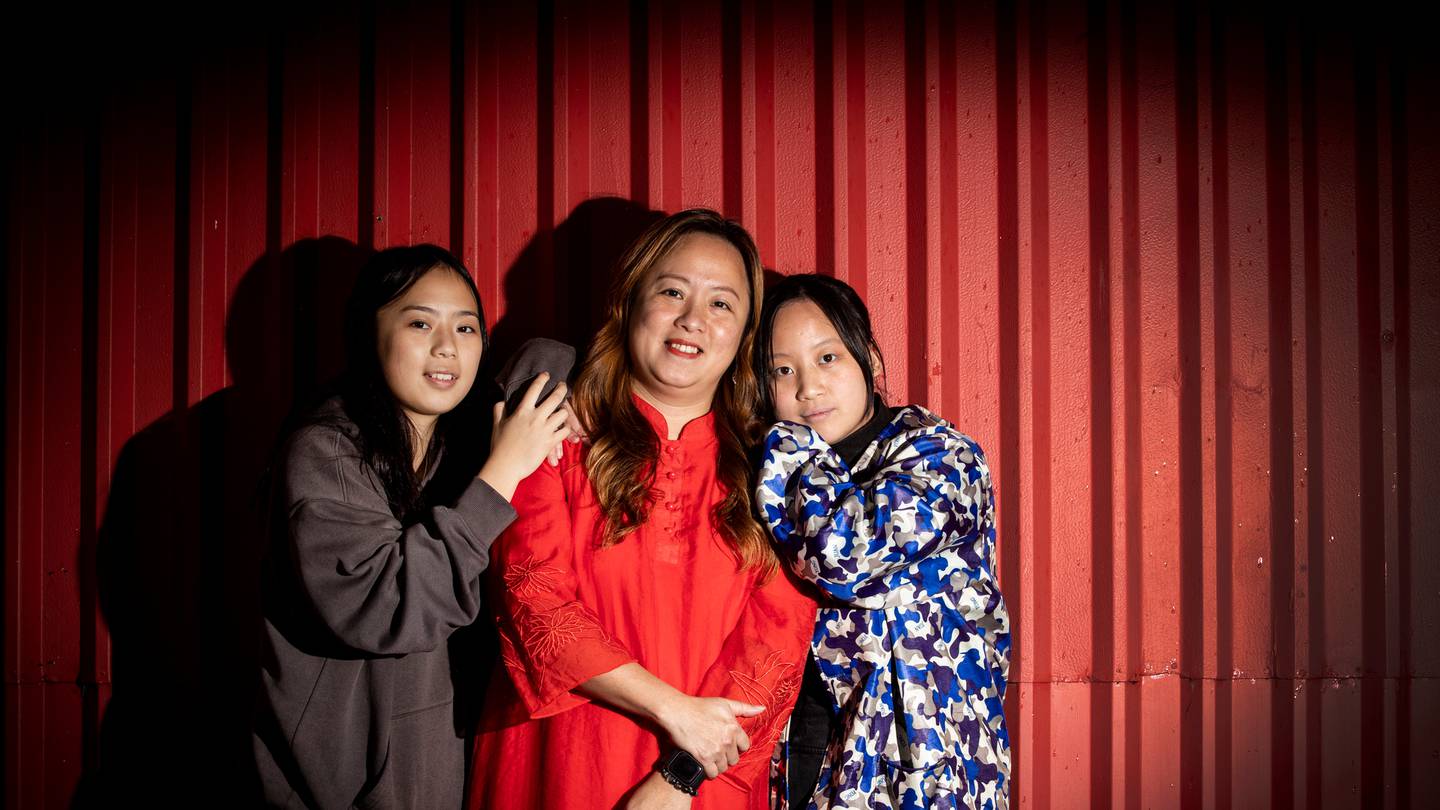 Another time, an elderly couple at the mall told them to wear masks and go home to their country.

Incidents like these are not the norm but have increased since the global outbreak of Covid-19, says the 41-year-old mother of four and founder of a parenting non-profit.

Asian families like Chen's are at the receiving end of new research showing Covid-19 has negatively impacted perceptions of Asia for a quarter of New Zealanders, even as the majority believe ties with Asia are important.

In the 2020 Perceptions of Asia survey by the Asia New Zealand Foundation, 25 percent of respondents said the pandemic had sullied their perceptions of Asia, 41 percent said it hadn't, and 30 percent felt neutral.

But at the same time, 73 percent said developing political, social and economic ties with Asia was important for New Zealand's future in 2020, up from 67 percent in 2019.

Asia is considered the second-most important region for New Zealand, ahead of the United Kingdom in third. As in previous years, Australia holds the top spot.

"People are saying we want to engage, we want to know more ... That to us showed a maturity with Asia that was a surprise to me."

The overall findings are reassuring but worth further investigation, says Emeritus Professor Manying Ip at the University of Auckland's School of Asian Studies.

"Twenty-five percent [reporting negative perceptions post-Covid], that is significant, right? I would ask the question, is my impression fair? What's behind the gut feeling?" 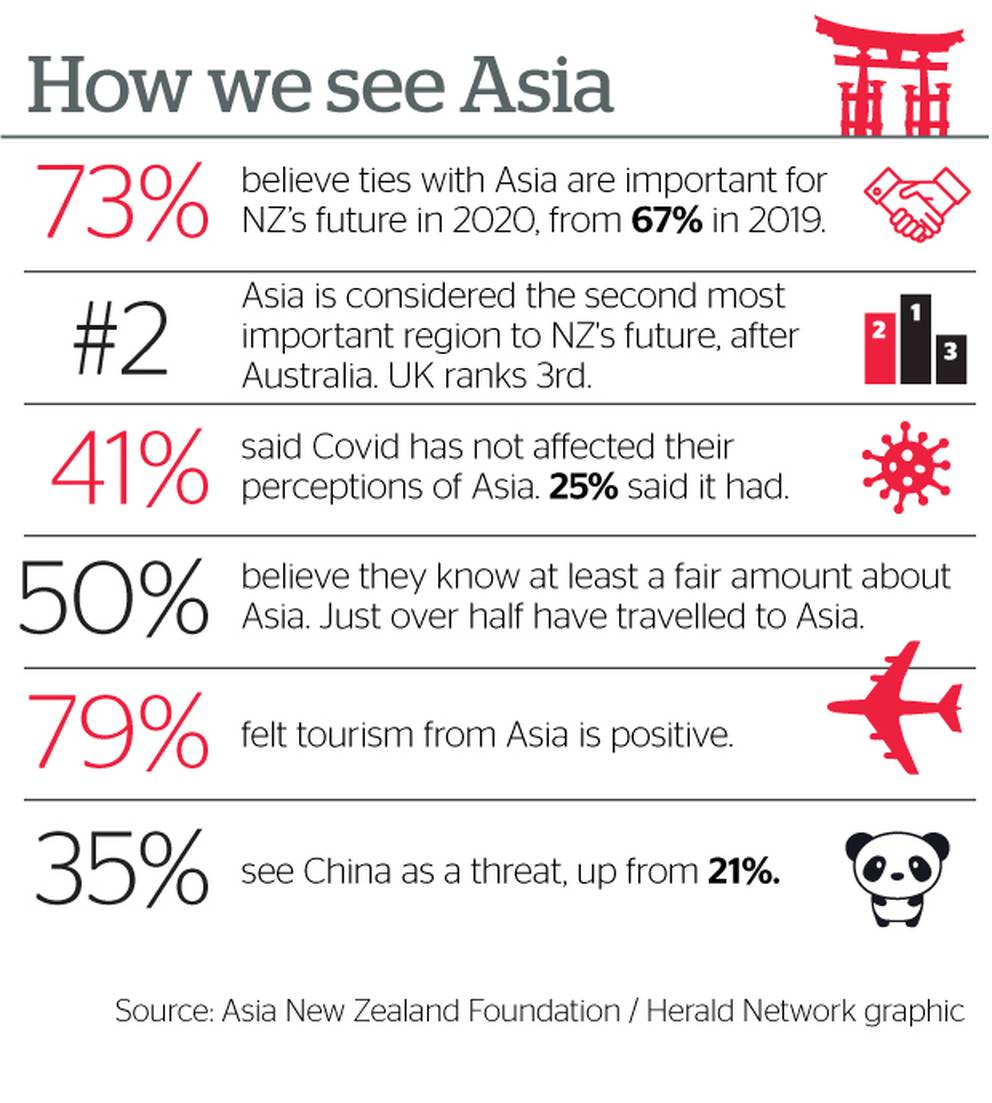 Graphic: NZ Herald
The results show an uptick in negative sentiment about both China and the United States.

Thirty-five percent of respondents saw China as a threat, up from 21 percent in 2019.

Twenty percent considered the US threatening, up from 12 percent.

But respondents also named China and the US, alongside Australia, India and Japan, as key relationships that New Zealand should put extra effort into.

China looms large in New Zealanders' views of Asia. Asked to give the first word they thought of when they heard or saw the word "Asia", the single most common response (33 percent) was "China", followed by "food".

Food and travel remain New Zealanders' most popular Asia-related interests, but music, art and literature saw a significant increase, with 57 percent saying they are at least somewhat interested, up from 48 percent in 2019.

Social media and the rise of Asian pop culture including K-pop are driving factors, says the report.

Half of New Zealanders believe they know at least a fair amount about Asia, and just over half have travelled there.

The more New Zealanders know about Asia, the more inclined they are to believe it's important.

The annual New Zealanders' Perceptions of Asia and Asian People's report for 2020 surveyed 2001 residents with findings weighted to be representative of New Zealand by age, gender and ethnicity.

"We often talk about our relationship with Asia in a trade sense ... whereas what this research is showing is that for average New Zealanders outside the Wellington policy town belt and outside Auckland business, New Zealanders are interested in Asia for a whole lot of other reasons to do with culture, food, people, politics," said Draper. 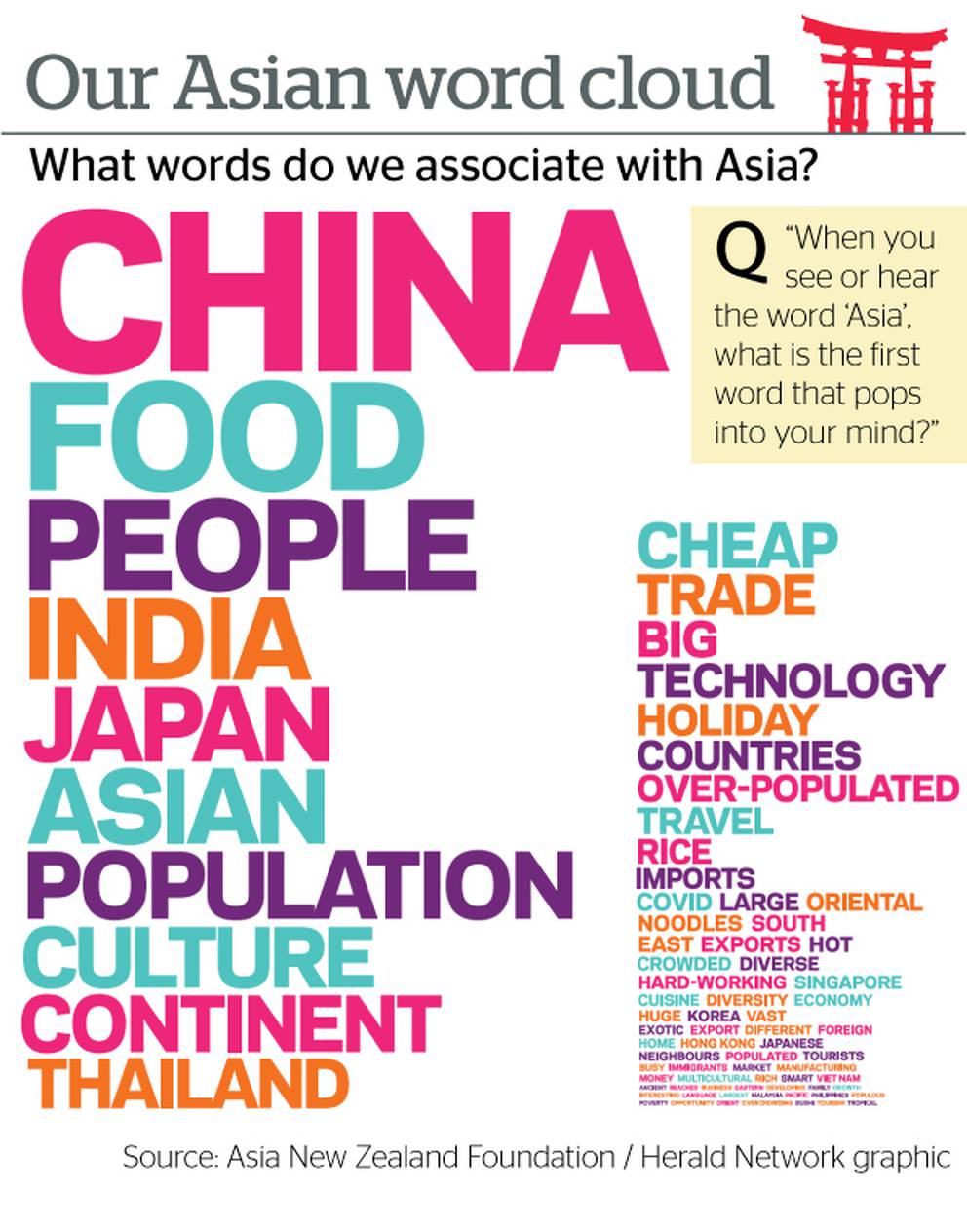 Graphic: NZ Herald
"I found that heartening," he said.

It wasn't this way in 1997, the year she arrived in New Zealand as a 17-year-old and had rubbish thrown at her head on her first day of school.

"It was a group of girls, they were giggling. They were so proud they'd hit the target," she recalls.

The pain she felt was similar when she was told to go back to her country at the height of Covid-19 last year.

"I see a better future for my children, but (these episodes) tell me there's still a long way to go."