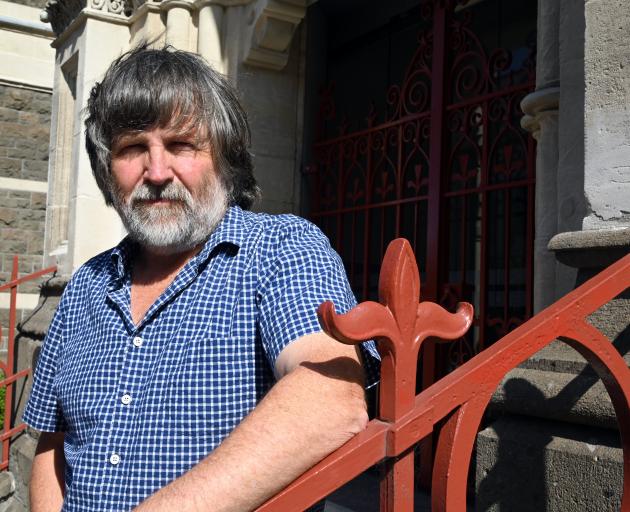 Founder of The Right Track programme, John Finch, thinks we should take a more proactive approach to educating drivers, rather than just helping them after the fact. PHOTO: CRAIG BAXTER
To be human is to err. Drink-driving is one mistake a lot of New Zealanders make, but the courts can ensure that mistake will not ruin their lives. Public Interest Journalism Fund court reporter Tina Grumball investigates whether an increase in drivers getting a discharge without conviction is a step in the right direction.

To be caught drink-driving used to be a guaranteed conviction, but things are changing.

The number of people walking away from the courthouse with a clean record is rising — a 78% increase in two years — and sparking a lively debate.

Some call it a "tap on the hand", an inadequate response to a serious crime, but others argue it is an essential tool to ensure a single mistake does not ruin people’s lives.

A discharge without conviction is one of the tools New Zealand courts can use when sentencing.

If granted, it allows a person to walk away with an unblemished criminal record.

While it was previously the territory of those who could afford a "fancy" lawyer, that is not the case any more.

Discharges involve a test whereby the consequences of a conviction must be out of all proportion to the gravity or the seriousness of the offending.

The Sentencing Act dictates any presiding judge must look to impose the least restrictive outcome, in the circumstances, for the defendant that comes before them.

This means considering discharging them if their counsel makes an application, regardless of social status or wealth.

The legal aid system ensures that even those who cannot afford a lawyer are able to apply for a discharge.

Dunedin Barrister Liam Collins was in favour of the sentencing tool.

"It’s whether a genuine, one-off, remorseful individual who is motivated to address the issues that caused the incident and put matters right should have a conviction entered on their record for life," he said.

"Otherwise young people who are still developing would have their futures compromised for one mistake, or middle-aged people ... who have gone their entire lives doing good should count for nothing if after all that time they make one mistake."

In a 2020 article, the Otago Daily Times revealed the number of discharges for impaired drivers since 2014 had hovered around 125 per year nationwide.

In the Otago region, including courts in Dunedin, Oamaru and Timaru, 23 people were discharged without conviction last year.

That is more than a tenfold increase from an average of two per year between 2014 and 2019.

There have been six granted in the Dunedin District Court this year, four of them for people under 25 years old.

"It is a tough test to satisfy and every case is different with the court carefully considering all factors relating to a person," Mr Collins said.

"In my view, these remain important applications."

While more of these applications are being granted, it begs the question of why they should be, considering the number of crashes on New Zealand roads in which alcohol and drugs are involved remains high.

Te Manatu Waka Ministry of Transport statistics from 2010 to 2020 revealed an average of 130 people died each year as a result of impaired driving.

At the breath-alcohol limit of 400mcg per litre of breath, a driver is 16 times more likely to be involved in a fatal crash, data showed.

It is not just the driver who gets hurt — between 2018 and 2020, every 100 drivers who died in alcohol- or drug-related crashes took 23 of their passengers and 30 other road users with them.

If the statistics show these substances cause such enormous problems on the road, then why would the court effectively let these drivers off?

Reacting to the aftermath of Anzac weekend this year — 11 dead — Vicki Smillie, of Waikouaiti, told the ODT she was "bloody frustrated" that people were dying on the roads all the time.

She lost her daughter, Kellie-Rachel Smillie, in 2006 to recidivist drink-driver Dean Anthony Martin (62). 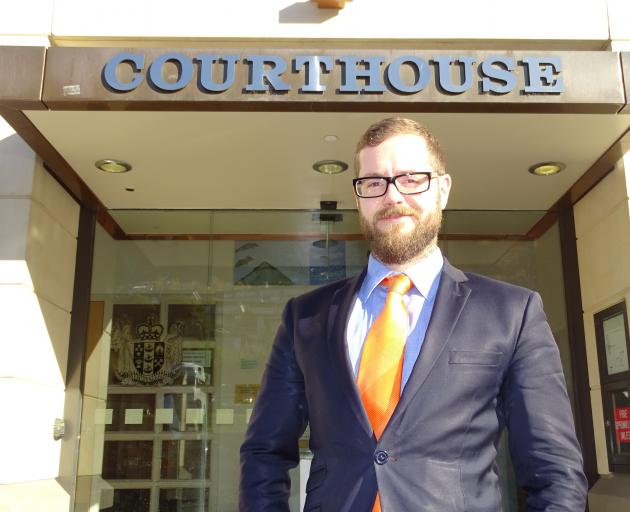 Discharges without conviction are an important tool for the courts to use, especially for those who made a mistake they will never make again, barrister Liam Collins says. PHOTO: TRACEY ROXBURGH
"It doesn’t go away in six months’ time ... this is 16 years later and it still affects the family."

Kellie-Rachel Smillie was 33 when she got into Martin’s car.

Vicki Smillie said her daughter had been reluctant to do so, but Martin was intoxicated and she did not want to argue in front of her children.

A neighbour was also in the car when Martin suddenly took off, a moment that would end in tragedy.

Drink-drivers "need to go to a family that’s lost a loved one, five years later and still see you picking up the pieces", she said.

Discharges without conviction were a "tap on the hand" to Vicki Smillie, particularly for young people.

The licensing system was too simple and drivers got their licences too young, she said.

They should be required to do a defensive driving course and only be allowed on the road at 18.

"You get behind the wheel drunk; this is what happens."

It angered her that recidivist drink-drivers like Martin kept doing it.

Someone educating drink-drivers is John Finch, founder of The Right Track programme. 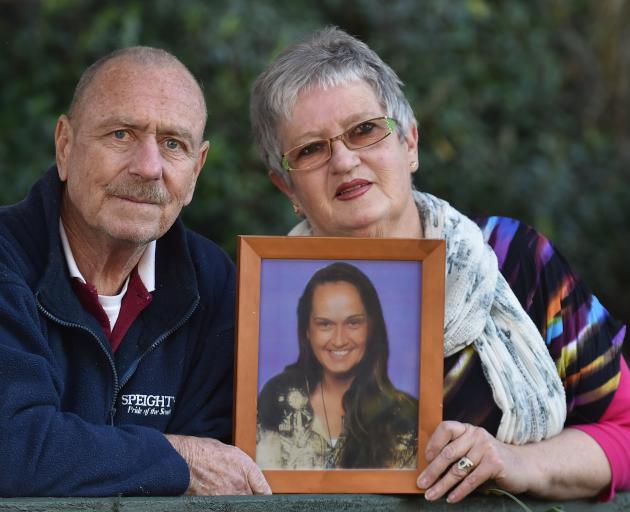 Neill and Vicki Smillie hold a picture of their daughter Kellie-Rachel Smillie, who they lost to a drink-driver. Vicki Smillie says there is not enough education for people before they get their licence. PHOTO: PETER MCINTOSH
The course runs for nine sessions over six weeks, targeting young and repeat driving offenders who are referred by the court.

These people are put face-to-face with the consequences of their actions, and given the opportunity and education to better themselves and their driving.

"If they don’t have the opportunity to change, then will they change or not?" Mr Finch said.

Because of the Covid-19 outbreak, several courses had been cancelled in Otago.

There was a growing backlog of people wanting to do the programme, but the next intake was not until September.

The impact of that could be massive, Mr Finch said.

He likened the debate over the benefit of discharges to "opening Pandora’s box".

For a young offender, it was better to not have a conviction on their records, but "unfortunately ... if you don’t impose a penalty, a punitive measure on somebody who does something wrong, then will there be any residual side effects?".

"Do they think they can get away with it?"

He described discharges without conviction as emotive and reactive, helping drivers after the fact rather than educating them beforehand.

He agreed with Vicki Smillie that drivers did not have enough education before they received their licences.

Bronwyn Cleaver and Tiriana Shearer have been involved in The Right Track programme for years, choosing to stay even after they had completed it.

Ms Cleaver finished her first round five years ago after what was her first drinking-driving incident. 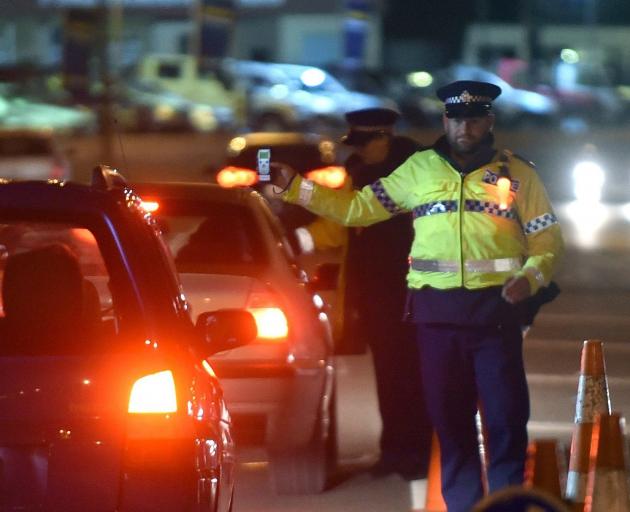 Police breath-test people at a checkpoint in Kaikorai Valley Rd in Dunedin. PHOTO: PETER MCINTOSH
It was Christmas Eve 2017 when she got in her car to check on a friend after a distressing phone call.

While she could not take her friend, she removed the children from the house and tried to take them somewhere safe.

She was stopped by police and admitted to the officer that she knew she would be over the limit.

The court granted her a discharge without conviction, concluding that she had no choice but to drive in that situation.

Ms Shearer completed her first programme in 2018 after her fourth drink-driving conviction.

She had drunk a couple of wines at her friends house before driving home, and was stopped by police just minutes from reaching it.

For both women, The Right Track was an emotional experience.

Now members of the trustee board, Ms Cleaver and Ms Shearer said they enjoyed helping others learn.

The course also helped them stay on track and held them accountable for their driving.

While some might see it as just another course they had to take, Ms Shearer said the majority of learners ended the programme with a brand new outlook like she did.

Discharges without conviction worked hand in hand with the programme as it gave people an opportunity to change their ways, Ms Cleaver said.

However, The Right Track was not a "get-out-of-jail free card" and not everyone who completed it received a discharge.

The Right Track encouraged them to face the consequences of their actions and prove they were not as "invincible" as they might think.