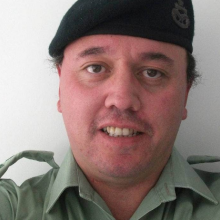 Bruce Reid impersonating a soldier in 2011. Photo: Supplied
A man who earlier pretended to be a decorated Kiwi soldier has now re-emerged in the guise of a rich doctor intent on buying his partner a $60,000 Porsche.

However, Bruce Reid's latest stunt has again landed him in hot water.

In 2011, he earlier ended up in court after donning medals and dressing as a Lieutenant Colonel with New Zealand's intelligence agency while attempting to pay for a property inspection.

Now a Christchurch car dealership has taken his former partner to the Motor Vehicle Disputes Tribunal for unpaid bills after Reid bought a $59,990 Porshe Boxster.

Reid - who signed off on his emails as Dr James Reid, a doctor of forensic psychology from the University of New South Wales - told Archibalds Motors he was on the hunt for a gift for his partner.

"She wants a convertible and a manual. She likes the look of the Boxter. My maximum budget is $90k," Reid wrote in an email to the dealership, according to the tribunal decision.

"Well, we better keep her happy then," a dealer who replied to Reid as "Dr Reid" wrote back.

The dealership then delivered the Porsche Boxster from Wellington to Reid's partner in Christchurch in December 2018, despite never receiving payment for it.

It was not until March 2019 - two months after the Porsche was delivered - that the dealership realised the car had not been paid for and chased Reid.

"I know you recollected paying it in front of Jarrod and he recalls much the same thing, but could you please have a check what dates it did come out of your account, and let us know the exact figures and that it was paid to our Archibalds account," the manager wrote.

"I am in meeting most of today. I will call into my bank tomorrow morning and get the information you require," he said, while signing off as Dr Reid.

Less than a week later, Reid again replied to an enquiry from the dealership, saying his "personal banker had a hard job finding it as I make payments simular [sic] to that at least four times a week to various charities".

Later Reid told Archibalds Motors his former accountant had "embezzled" more than $200,000 of his money.

She returned the car when she realised it had not been paid for.

However, Archibalds Motors took her to the Motor Vehicles Tribunal to recover $21,033 in costs it spent trying to recover the car.

The woman told the tribunal "she now knows that Mr Reid is a notorious con-artist who has engaged in many frauds".

"She advises that there is a police investigation of this matter underway," the tribunal decision said.

"Without wishing to cut across any ongoing police investigation of this matter, the documentary evidence produced to the tribunal makes it abundantly clear that Archibalds has been the victim of a fraud committed by Mr Reid or someone using that alias."

"Archibalds has let itself down by its lax process for ensuring it has received payment in respect of a vehicle prior to that vehicle being delivered to the prospective purchaser."

The tribunal decision said Reid's former partner gave the car back as soon as she realised it had not been paid for and that it had not seen any evidence she was aware before March 2019 Reid had defrauded the dealership.

The tribunal consequently dismissed the claim by Archibald Motors that she should pay the $21,033 in costs.