Cheryl Te Maro, who was killed in 2018 after the car in which she was travelling was struck head on. Photo: Supplied
The sister of a fatal crash victim says she doesn't believe the driver charged by police caused the accident. A judge who heard the evidence was critical of the police investigation and ruled "not guilty". Was there a third vehicle involved - and if not, how did an unusually striking dent appear on the back of the car that crossed the centre line?

That question hovers over a fatal crash near Paparoa in Kaipara that happened in March 2018.

The police believed it had the answer with an investigation that put Anthea Hamlet, 78, of Dargaville, in the dock at Whāngārei District Court charged with careless driving causing death.

The charge was dismissed with Judge Duncan Harvey, who said there was a "plausible" alternative story - one in which a third vehicle shunted Hamlet's Jaguar across the centre line and into the path of Te Maro's Mazda.

Harvey said he had heard no evidence from police of "an extensive inquiry" into a truck seen in the area. There had also been no police investigation into a dent on the rear left-hand corner of the Jaguar, presented as evidence of Hamlet's car being hit from behind.

That was despite the defence and prosecution agreeing, ahead of the trial, that a dent on the rear left-hand corner of the Jaguar driven by Hamlet was not present prior to the crash. 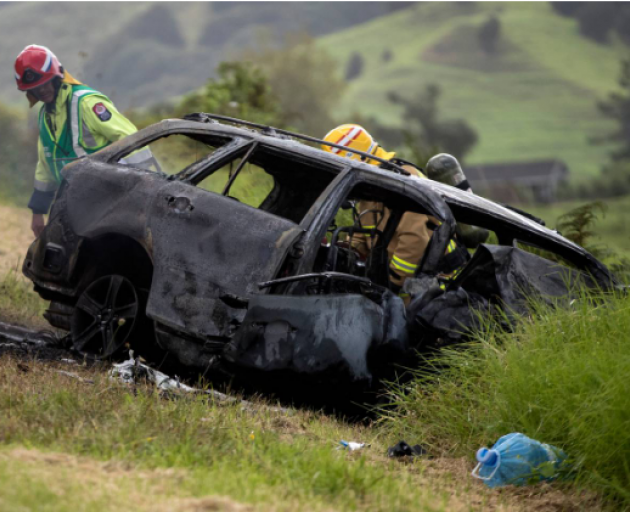 Emergency services at the car driven by Cheryl Te Maro. Photos: NZ Herald
Cheryl's sister Annie Te Maro is still grieving the loss of a woman she described as "big sister, best friend and mother all rolled into one", and feels guilty that she projected anger at Hamlet after she was charged.

"I went into the court case with a lot of hatred towards her. Since then, I've had a lot of time to reflect and I don't think she did it.

"That woman had to wear my hatred for that long and I'm very sorry about that. I truly am sorry from the bottom of my heart how I felt towards her, because I thought she was the cause of my sister's death. If I had the chance I would say sorry, because I don't believe it was her fault."

It was an ordeal that began with news Cheryl had died while travelling with her partner from her home in Dargaville to visit an aunt in Auckland. The court hearing was a hoped-for path to healing but for Annie it was the defence that delivered a compelling argument.

"I don't believe they did their job properly," she said of the police investigation. "They were never thorough, in my opinion, doing everything that should have been in place before that court case.

"At the end of the day, we are left holding that pain. Where is the justice? They didn't do their damned job."

Annie said she left the courtroom concerned at how the prosecution case had unfolded, and feeling sorry that Hamlet had been charged over the crash.

"How could she have the blame put on to her when the cause of the crash could have been someone else?

Annie said the "really lopsided" court hearing left her feeling the defence had "diligently" done an "amazing job", explaining what might have happened to cause the crash. Questions from Judge Harvey had her wondering why avenues of investigation that appeared obvious had not been pursued. 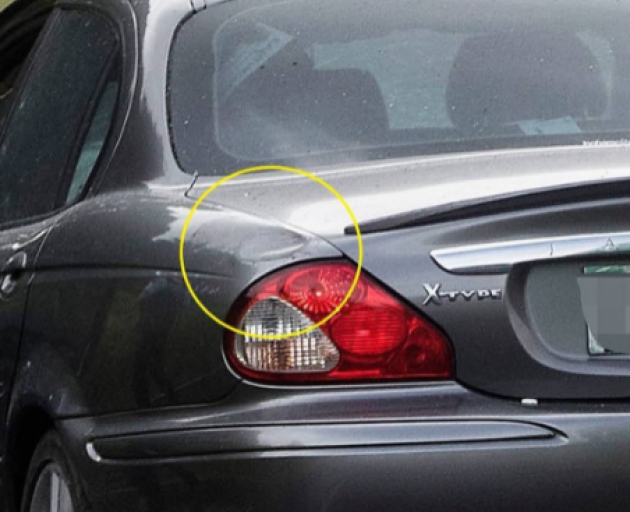 Anthea Hamlet's damaged Jaguar with the dent circled. Her lawyer's said it was evidence of a third vehicle that hit her vehicle before the head on collision.
Harvey's judgment highlights areas of investigation in which the police did not offer evidence. He said the serious crash investigator had not obtained Hamlet's cellphone records or carried out checks on her driving history to support the police theory that distraction or falling asleep had caused the crash.

Harvey also said the serious crash investigator admitted not reading reports on distraction or sleep, despite introducing those into evidence, "but simply relied on what I will refer to as the headlines".

He also said "no effort was made" to find the speed at which the vehicles were travelling before the crash.

On the rear left-hand corner dent in the Jaguar, Harvey said "regrettably" it was not examined at the crash scene or afterwards. Police evidence that it could have been caused by a fire hose was "nothing more than speculation".

Harvey also said he "did not hear evidence that an extensive inquiry" was made into witnesses seeing a truck in the driveway Hamlet had passed immediately before the Jaguar crossed the centreline.

In his ruling, he said: "What caused this accident? In truth, the answer has to be we do not know."

Coroner Erin Woolley's report into Cheryl Te Maro's death summarised the court case, saying there was no dispute that Hamlet's car had crossed the centre line.

"The issue at the trial was what had caused Ms Hamlet's vehicle to cross the centre line."

Woolley had examined the police crash report and one prepared for the defence by Sandy Beckett, who retired from police after decades investigating serious crashes. She said Harvey's judgment showed police "did not examine the extraneous damage to Ms Hamlet's vehicle and were unable to rebut Mr Beckett's theory to the standard required".

Defence lawyer Alistair Haskett told the Herald the police charge appeared to be based simply on Hamlet's car being on the wrong side of the road. He said the better question he had sought to answer - with Beckett's assistance - was how it got there.

"There was zero evidence of distraction and zero evidence she fell asleep." He said Hamlet was making the journey to her Dargaville home on familiar roads and had broken up the trip with tea and food in Wellsford. "She was well-rested."

Haskett said the dent at the rear of the vehicle stood out immediately as it was "inconsistent with the head-on collision". The Jaguar's front right struck the Mazda, yet the rear left had "a sizeable dent and obvious striations (grooves or scratches) going left to right".

The debris trail at the accident site meant Cheryl's Mazda was only ever on the right of the Jaguar. 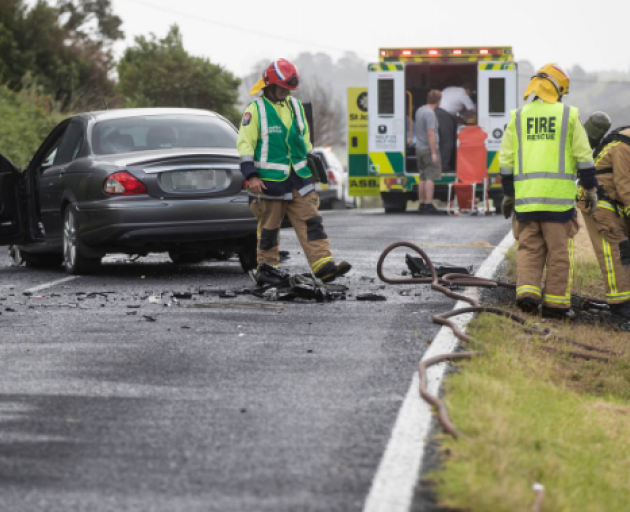 Emergency services at the scene of the 2018 car accident near Paparoa.
Haskett said his study of police reports showed no cause for the dent had been found - only the suggestion that a fire hose might have caused the damage.

However he said scene photographs showed it unlikely a fire hose had been at the rear of the vehicle, and police had not interviewed the fire crew present to establish or rule out a link to the dent.

He put the police file to Beckett, whose report found a truck or other vehicle with a bull bar had caused the dent.

Haskett said he had no issue with police laying charges where evidence supported doing so. However, he said the flaws in the police case showed the need for ongoing revision and further investigation.

Poorly prepared cases put before a court added to the grief felt by victims' families and also placed pressure on people who might otherwise not have been charged, he said.

A police spokesman said the investigation involved looking for eyewitnesses and obtaining details about a truck seen in a driveway near the crash site. No eyewitnesses were found and the truck was "ruled out" as it wasn't present until after Cheryl's car was alight - a detail contrary to Harvey's summary of police evidence.

The police spokesman said: "No further inquiries after the crash were made to identify the third party/vehicle."

The spokesman said three crash analysts peer-reviewed the file and "do not believe it is credible" a third vehicle was involved based on evidence from the crash site.

There was no review of the investigation after the court hearing. "The prosecution belief was that there was no third vehicle involved," the spokesman said.

The Herald asked further questions about the crash in early December. Police said they were too busy to respond.

Two Jaguar specialists shown photographs of the dent and interviewed by the Herald were adamant a fire hose could not have caused the damage seen on the car. While they said the model of Jaguar was its mass-market model, similar to a Ford Mondeo, the corner where the damage was sustained was the strongest part of any vehicle.

The crash at Paparoa happened a month before a fatal crash south of Kerikeri in which two men were killed and foreign driver Reiss Berger was charged. The case against Berger was dismissed after evidence emerged showing the driver killed in the crash was wrestling with meth addiction and had spoken of suicide before deliberately driving on the wrong side of the road towards Berger's campervan.