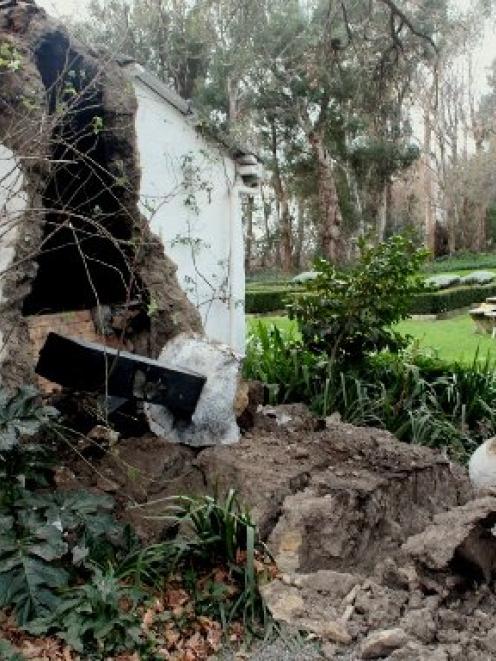 The cob walls of a Seddon house crumbled in Friday's 6.6-magnitude quake. Photo by Bejon Haswell.
The Red Cross is winding down operations in Seddon following Friday's large earthquake that damaged homes, leaving some uninhabitable.

The 6.6 magnitude quake struck near the South Island town about 2.30pm.

Since then a swarm of aftershocks have hit the centre of the country, continuing to rattle quake-weary residents.

Seddon suffered the worst damage from the shakes with five houses damaged so badly, they are uninhabitable.

Mr Brownlee said engineers from the EQC were already carrying out assessments.

"What's important is that we get the assessment process underway quickly and move toward a rapid settlement with those who have damage."

"EQC are coming here on Monday and already EQC engineering assessors are here looking at the land conditions here making sure we don't have any issues.

"It appears there isn't, which is good."

Heavy rain and high winds hit the area yesterday, but a break in the weather today should allow for a clean-up effort to begin.

Red Cross spokesman Gerard Moore told Radio New Zealand the community spirit in Seddon was similar to what he witnessed after the 2011 quake in Christchurch.

"People respond in different ways but you see the same type of reactions all over the place, whichever the situation, and you see the same great traits in people supporting each other and the wonderful stories of help and assistance."

One person was admitted to the hospital, but was in a stable condition by yesterday afternoon.

The MP for Kaikoura Colin King told RNZ the town escaped lightly in terms of injuries and emergency services could have been dealing with a very different situation.

"When a chimney goes down ...or the church, if there was a congregation in it at the time, there wouldn't have been only casualties, there would have been fatalities," he said.

Meanwhile, in Wellington demolition of a damaged lift shaft in the CBD would continue today.

A 400 tonne crane was being ferried to the capital from Christchurch to help dismantle the Luke's Lane lift shaft, which was initially damaged in last month's 6.5 magnitude quake.

However, he said there were few cranes in the country that could be used to remove a concrete slab at the top of the shaft, which weighed at least 30 tonnes.

The large crane would take some time to set up so lifting would not start until at least tomorrow, Mr MacLean said.

Victoria University said as a precautionary measure it had closed all its campuses this weekend due to the ongoing aftershocks.

The closures applied to the Karori, Kelburn, Pipitea and Te Aro campuses.

The university was expected to reopen tomorrow morning.